Miranda has her hunky NYPD cop, Carrie has her chisel-chinned ice hockey player and Keith Urban has Nicole Kidman – it’s all very heart-warming. But, every now and then, the country music stars align and two of its own join forces to become that rare and most commercially lucrative of things: the country power couple.

With 23 divorces between them, what we can probably learn from these timeless country love stories is that, sometimes, it’s a case of if at first you don’t succeed then try, try and try again (and then try again after that if you’re Waylon Jennings). True love had to wait for these matches made in country music heaven, but they got there in the end.

Here are some of country music’s most iconic couples throughout history, proving the old adage that the couple that sings together stays together... Well, most of the time. 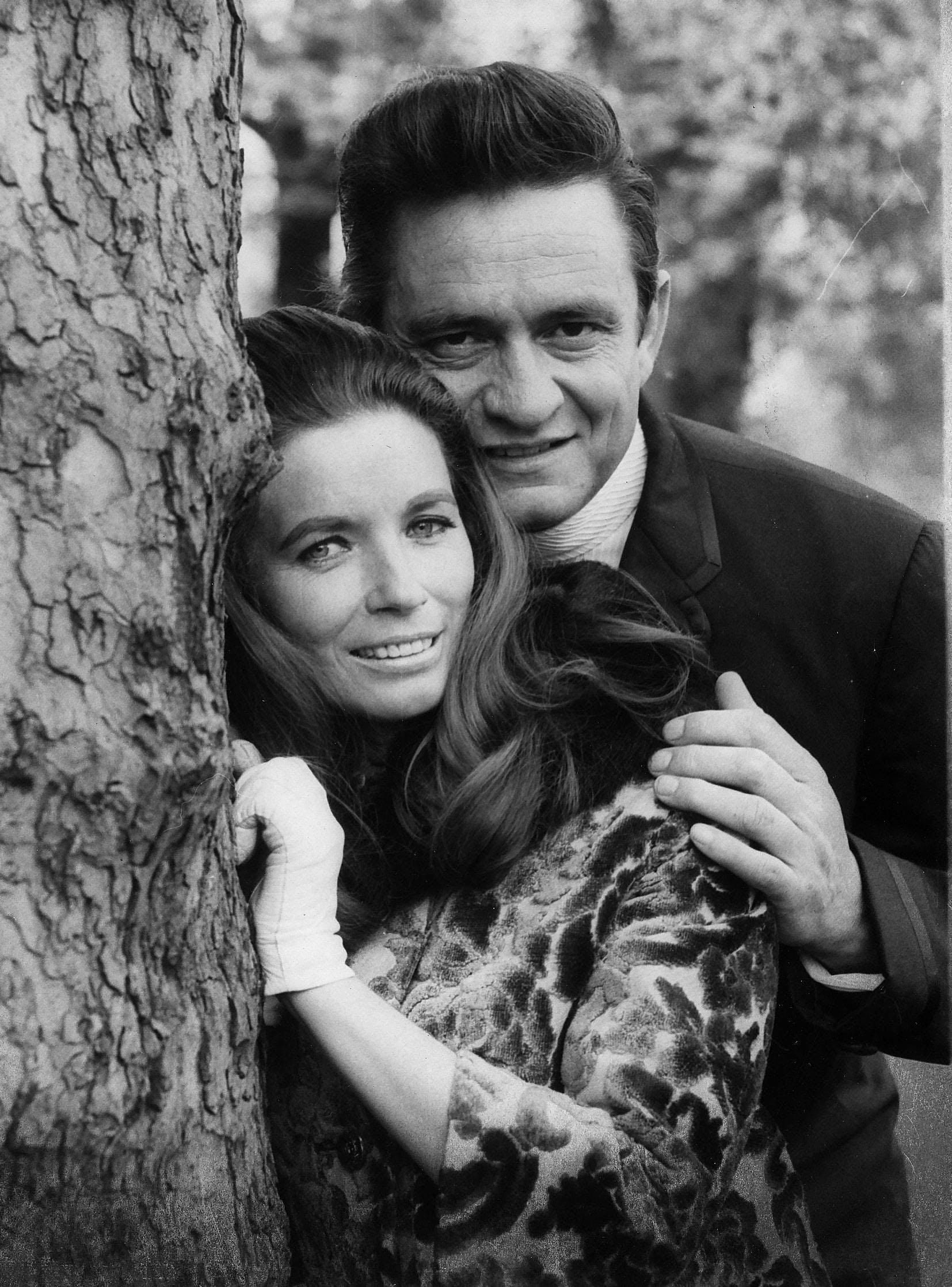 “This morning, with her, having coffee,” replied Johnny Cash when asked what his definition of paradise was. Probably the most iconic country music romance ever, Johnny Cash and June Carter’s love story is a timeless and enduring one.

“We’re soulmates, friends and lovers and everything else that makes a happy marriage,” Johnny once said. “Our hearts are attuned to each other, and we’re very close. I’ll get up every morning at five o’clock and make the coffee, then start pacing the floor, wanting her to get up. But I’ll let her sleep for a couple more hours. If she smells the coffee, she’s up.”

Having met backstage at the Grand Ole Opry in 1956 on the night that Johnny made his Opry debut, it was when June’s husband at the time, Carl Smith, introduced them after the show that the couple first locked eyes. June, the daughter of Maybelle Carter, was already country royalty when they started touring together in the early 60s.

It’s never been completely clear when the two eventually got together, but Johnny proposed to June onstage at the London Ice House in February 1968, and the couple were married just a few weeks later. They stayed together for the rest of their lives - June helping Johnny battle alcohol, amphetamine and barbiturate addiction in the 60s and 70s – and eventually died just four months apart from each other in May and September of 2003.

“There's unconditional love there. You hear that phrase a lot but it's real with me and her,” Johnny once said of June. “She loves me in spite of everything, in spite of myself. She has saved my life more than once. She's always been there with her love, and it has certainly made me forget the pain for a long time, many times. When it gets dark and everybody's gone home and the lights are turned off, it's just me and her.”

"I was naggin' and he was nippin'" was Tammy Wynette’s assessment of her relationship with George Jones, in reference to his wild cocaine and alcohol binges and the fights that would inevitably follow. The First Lady of Country Music and the King of Country Heartbreak reset the bar for tumultuous country romances when they got together in the late 60s, but along the way they recorded some of the greatest country duets of all time; often chronicling their own stormy relationship. Some of their best – like ‘Golden Ring’ and ‘Two Story House’ – were recorded after they’d divorced from each other.

George and Tammy had each been married twice before they got together. Their relationship got off to a typically dramatic start in 1969 when George went over to Tammy’s house one night to have dinner with her and her husband, the songwriter Don Chapel. At some point in the evening, Tammy and Don got into an argument, which ended up with Don calling Tammy a “son of a bitch” in front of George.

“I felt rage fly all over me,” remembered George, who had been secretly hiding his feelings for Tammy. “I jumped from my chair, put my hands under the dinner table, and flipped it over. Dishes, utensils, and glasses flew in all directions. Don’s and Tammy’s eyes got about as big as the flying dinner plates.” George professed his love for Tammy there and then and Tammy told him she loved him too. They took Tammy’s kids, left the house and drove off together.

Their marriage lasted until 1976, but even after it ended, they remained friends, recording and performing live onstage together. "Tammy and I are getting along better than we ever did when we were married. I think we still love each other. I know I love her," George told People magazine. One of the highlights of their live shows was when they sang ‘The Ceremony’ together, a song which mimicked a full marriage service, complete with a minister, church organ, and George and Tammy renewing their vows and professing their love for each other.

Among their other most iconic power couple moves were emblazoning "Mr. and Mrs. Country Music" across their tour bus and naming their only daughter Tamala Georgette Jones.

The story of Glen Campbell and Tanya Tucker’s whirlwind love affair was an all-you-can-eat country buffet for the tabloid press in the early 80s. With a 22-year age gap between them, Glen was surfing whitewater following his mid-70s peak, and was coming off the back of a messy divorce from his third wife. Tanya was the 21-year-old child-star-turned-wild-child of country looking for love in all the wrong places.

Their romance had lasted less than a year - the dream lovers turning out to be a bit of a nightmare, with reports of violent fights, drug and alcohol-fuelled nights and flying hairdryers - but not before it had become one of country music’s most iconic love stories. He spent $57,000 on a party for her 22nd birthday in LA and was even planning on backing Tanya’s Beverly Hills high-fashion clothes boutique, Rhinestone Cowgirl.

But sadly, both the store and the grand opening they’d planned for it – with Glen singing ‘Rhinestone Cowboy’ and Tanya riding in on a white horse – was never to be. It was all over before it had even really begun. Now all we’ve got to remember it by are those photos of that one time they went roller-skating together in New York City. 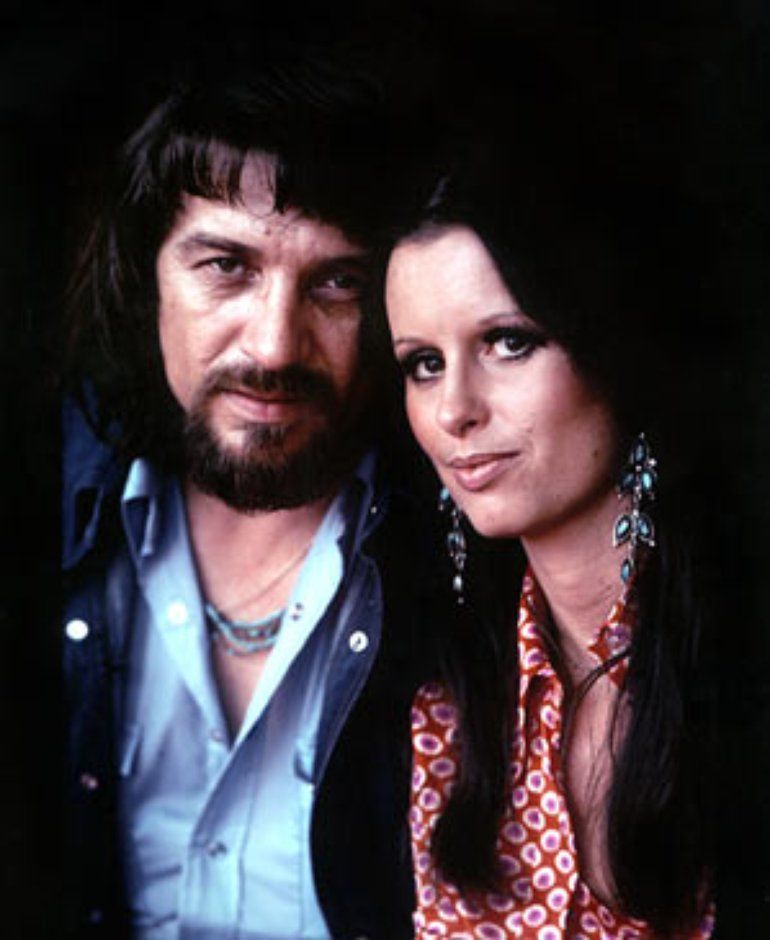 When Waylon Jennings and Jessi Colter – the undisputed king and queen of outlaw country - got together in 1969, Waylon had already been married three times and Jessi had only just got divorced from Duane Eddy. “When I met Jessi, I was pretty well at my lowest point,” Waylon told Rolling Stone in 1973. “I weighed 138 pounds and I was bent on self-destruction. Wallerin’ in self-pity was the biggest part of it, stayin’ depressed all the time and stoned. Jessi was the best thing that ever happened to me.”

Kris Kristofferson once described their marriage as a "beautiful love affair”; they recorded duets together throughout their careers, most famously on Wanted! The Outlaws, the first country album to sell over a million copies. Their version of the Jessi Colter song ‘Storms Never Last’ - a softly sung lesson for us all in how to stick it out through the tough times - will forever be one of country music’s greatest duets.

But it’s a moment halfway through Jessi’s performance of ‘You Hung The Moon (Didn’t You Waylon)’ on the 1976 Johnny Cash And Friends television special, when the camera pans round to reveal it’s Waylon on guitar, that really wins the fruit basket for cuteness. “When it's all said and done, when they remember me, they'll think of you,” Waylon sang in the chapter of his audio-biography dedicated to Jessi. We still do, Waylon. We still do. 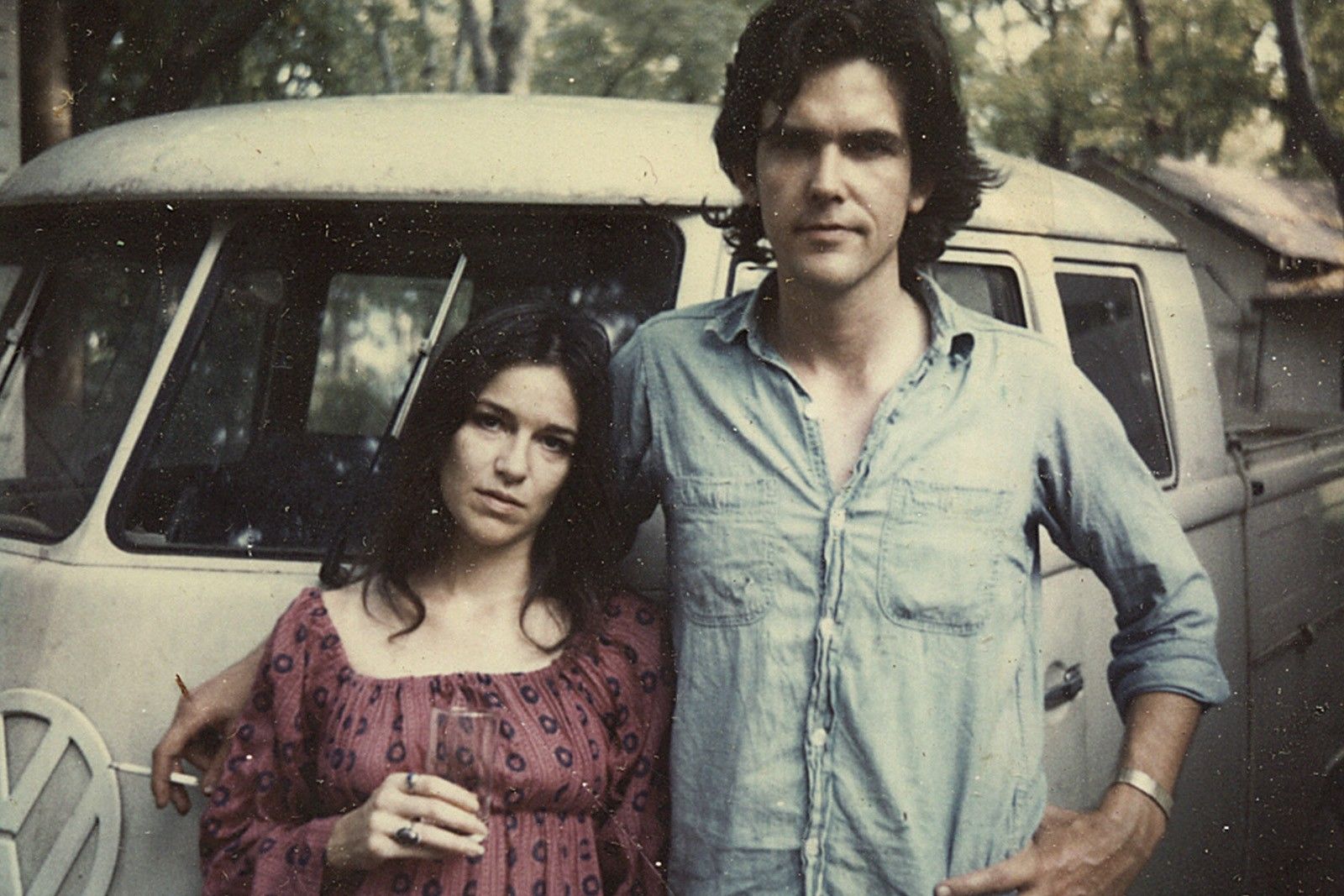 Guy and Susanna Clark’s relationship was one of the great romances of country music, and they stayed together on and off for over 40 years, through the good times and, more often towards the end, the bad.

They were the unlikely godparents to what would turn out to be an emerging Americana scene in the 1970s, immortalised in the Christmas Eve guitar pull scenes from Heartworn Highways; filmed around a kerosene lamp-lit kitchen table cluttered with wine bottles and ashtrays in Guy and Susanna’s house in Hendersonville.

They were the kind of couple that every teenager wants their parents to be when they’re growing up; all their young, cool and funny friends coming over to the house all the time, rolling spliffs at the kitchen table and drunkenly singing and dancing around the living room at two in the morning.

Chris and Morgane Stapleton met when they were songwriters signed to publishing companies next door to each other. “He asked me if I wanted to write a song with him at 6 o’clock on a Friday night,” remembers Morgane. “We tried to write a song, but we ended up just making out most of the night. That ended up being our first date.”

They’re the classic office romance. They might not be making eyes at each other over a water cooler or furtively brushing hands by the photocopier, but if you’ve ever seen these two locking eyes whilst singing onstage together, you’ll know that theirs is a relationship forged in a life spent working alongside your one true love.

You can imagine them sitting quietly on the edge of a half-built stage the afternoon before a show with their lunch boxes and thermos flasks, swapping pickles for chips. "We can lift each other up on bad nights,” Chris told the New York Times, “kind of give each other a wink when we screw up or do something funny." 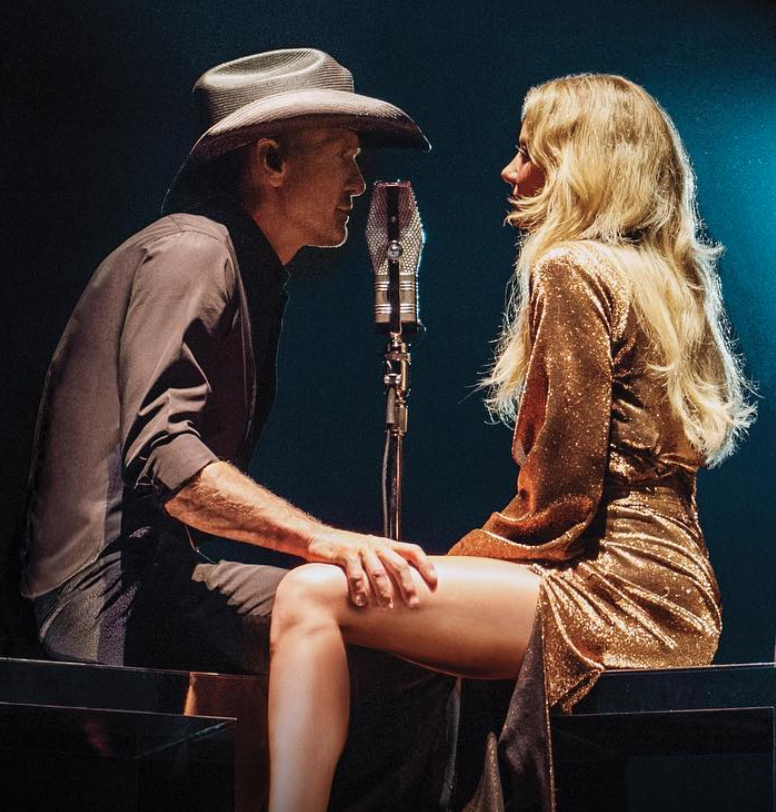 Sparks between Tim McGraw and Faith Hill began to fly when Faith was Tim’s opening act on the appropriately titled Spontaneous Combustion Tour in 1996, and ever since then they’ve been country’s most sexually potent couple.

Their romance is that of matching white linen outfits, moonlit beach walks and having their wedding photos printed onto canvases. It's an overflowing, sexually-charged love that can’t help but spill out everywhere they go, whether they’re slow dancing in the kitchen or sitting between each other’s legs gazing as they sing ‘I Need You’ in front of a stadium full of awkward fans.

They’re the kind of couple who sneak off when you’re out for dinner with them to go and make out in the restaurant bathroom. “Forever and always living and loving our way through anything”, wrote Tim McGraw, beneath a soft-focus photo montage Instagram post on their wedding anniversary.

Oh my god. Get a room already! 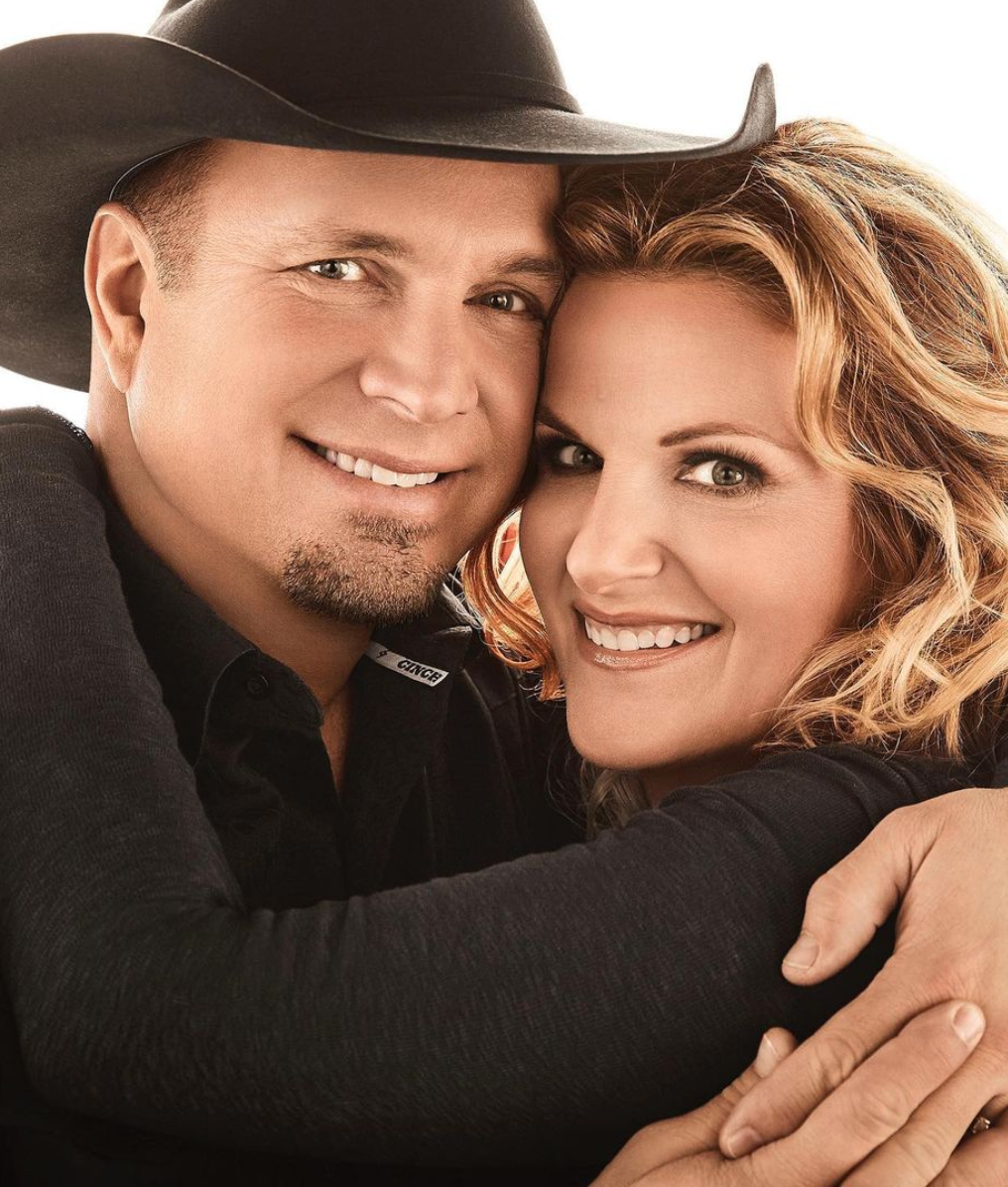 The story of Garth Brooks and Trisha Yearwood’s romance is one of country music’s most enduring fairy tales.

It begins with them recording a demo together on Music Row and ends happily ever after, 18 years later, with a marriage proposal in front of 7,000 people at the unveiling of a Garth Brooks statue. When they first met, they were both already married to other people, but after three divorces and “13 or 14 years of ‘it can never be’,” as Garth describes it, the star-crossed country lovers finally got together.

So great is their love, that Trisha estimates they only spend five days apart in every year, which is an incredible achievement when you consider that’s 360 days a year spent with Garth Brooks! “I thought I was happy in my life, and I think I just didn’t understand that this was what love really is,” Trisha says. “I had no idea. It’s a ton of bricks that lands on you and you have no choice.”