This release feels like the beginning of a confident new phase for M.C. Taylor - and might herald that for the music world in general too. 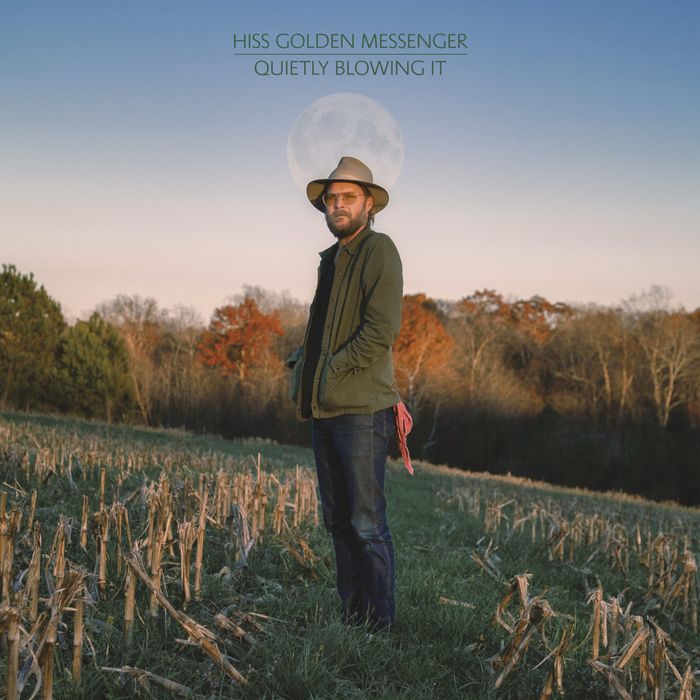 For most in the concert end of the music business, 2020 was a cold slap in the face. The income generated from touring that artists and support staffs count on in this era of streaming and anaemic physical sales was quickly eradicated. But in M.C. Taylor’s (aka Hiss Golden Messenger) case, the pandemic arrived when he was feeling drained from the constant strain of road work and churning out new material written on tour.

Taylor took advantage of the situation to ensconce himself in an 8’ x 10’ room in his Durham, North Carolina home to work daily on composing tracks, resulting in Quietly Blowing It, his twelfth set. It was an intense and personal process, he describes in ‘Mourning in America’, an essay he penned about this project. “I wrote about things that felt important to bear witness to for myself: Class and money and work. Alienation, disorientation, and self-hatred…and I wrote about the inverse of those things too.”

That’s a huge chunk of heaviosity for any record to bear, but Taylor’s approach on Quietly Blowing It is far from a downer. On the contrary, these elegant, blue-eyed soul gems float and flow out of the speakers with an easygoing, some may say comforting, groove. There’s a whiff of Steely Dan in the opening ‘Way Back in the Way Back’ as horns and backing singers bring sweet R&B to a tune with the somewhat ominous lyrics of “The peace sign is broken / What is forgiveness? / What is atonement? / I wanna go home”.

Neil Young's influence seeps into ‘Glory Strums (Loneliness of the Long Distance Runner)’ as a high lonesome harmonica reflects the solitude and internal struggle Taylor feels, akin to the titular athlete as he sings “I know that there’s good in me / Why’s it such a hard time?”. His vocals are similar to those of John Mayer, smooth and unruffled, even when the subject matter concerns the frustrations and inherent dichotomies of the life he has chosen. That’s especially true in ‘Sanctuary’ with “Feeling bad / Feeling blue / Can’t get out of my own mind / But I know how to sing about it”.

Sonically, Quietly Blowing It skirts old Van Morrison territory, mixing soul, folk, country and jazz whilst never sounding like one genre too specifically. Even though over 11 musicians are credited with the full sound, there is plenty of breathing room for Taylor’s sweet, honest and unpretentious voice. The title track is particularly influenced by Moondance-era Morrison, as languid organ and smoky guitar set the mood for words that reflect 2020’s protests with “The shape of things / Don’t look so good / On the TV there’s a riot goin’ on”.

“Who is it that’s quietly blowing it?” he asks in the notes. “Why it’s me of course” he answers. But you don’t need to get caught up in Taylor’s private or socio-political concepts to enjoy the fresh, free, relaxed music that belies the claustrophobic circumstances in which it was composed.

Would this be such an evocative and melodic album without the pandemic creating time and space for Hiss Golden Messenger to express himself psychologically? We’ll never know. But it makes no difference in how exquisitely produced, played and constructed these songs are. This HGM release feels like the beginning of a confident new phase for Taylor - and might herald that for the music world in general too.

M.C. Taylor spoke to Holler and curated an exclusive playlist for Cuts The Deepest, detailing his favourite and most influential tracks of the moment. Check out the feature and playlist here.