It’s impossible to overstate the importance of this debut. Not only did it introduce Yoakam as a fledgling yet seasoned talent with a voice that comes along once in a generation, but it presented pure country, amplified and energized, to a new, younger audience.

When a recording artist is tagged as “too country for Nashville”, it’s difficult to decide whether that’s a compliment or an insult. It’s especially odd since the city prides itself on its Country Music Hall of Fame and has museums dedicated to classic C&W names like George Jones and Johnny Cash.

Whichever way Dwight Yoakam perceived it when he visited various Music City labels to drum up interest in his contemporary hillbilly approach, it ended up working out well for the young country singer/songwriter. This was during a time in the late 70s that culminated in 1980’s mega-hit movie Urban Cowboy. It was an era where Yoakam’s traditionalist style was at odds with the far slicker, more cosmopolitan country flavor of the day. With Nashville uninterested, the realization set in that he needed to find another avenue to market his tough, unvarnished Bakersfield fashioned music.

So the Kentucky born, Ohio raised singer/songwriter hauled himself to LA in 1977. While there wasn’t much of a thriving country scene in California either, the state was home to Buck Owens and Merle Haggard, two of Yoakam’s biggest influences. Eventually, he found a welcoming audience gigging with other raw, roots-based outfits like The Blasters, Los Lobos, and X, all of who had somewhat elusive country roots which were mixed with punk, rockabilly, blues and Latino sounds.

It took a few years of fronting groups like Kentucky Bourbon, but eventually LA audiences embraced Yoakam’s retro hardcore country, electrified bluegrass and deep rural groove; enough so that he recorded 10 demos in 1981 over the course of six months. He tried to interest Nashville labels but, not surprisingly for the time, none bit. Then it was back to LA, where Yoakam connected with guitarist/producer Pete Anderson, with whom he formed The Babylonian Cowboys. They soon became a fixture at the LA club The Palomino.

Things finally started happening. Yoakam scraped up $5000 to finance a six-song EP which he titled Guitars, Cadillacs Etc., Etc. Only a few thousand were pressed on the tiny Oak imprint in November 1984, but they created enough of a stir to get Warner Brothers interested. Instead of re-recording those half dozen tracks, Yoakam felt strongly enough in them to demand they be released as-is. He tacked on four new songs, colorized the cover photo and the 10-tune album hit the streets in March 1986, on Warner’s Reprise imprint. It was an auspicious beginning to a business and professional association with Anderson that lasted until 2001 - one that yielded Yoakam’s greatest commercial success.

The release of Guitars, Cadillacs… helped shake the country world out of its Urban Cowboy doldrums. The leadoff cover of Johnny Horton’s ‘Honky Tonk Man’, featuring the opening lines of “I’m a honky-tonk man and I can’t seem to stop / I love to give the girls a whirl to the music of an old jukebox” may not have been penned with Yoakam in mind, but it effectively consolidated his rugged, sexy persona in a few sentences and tacked it onto a hooky chorus. It reached no.3 on the US singles country charts and along with a video - credited as being the first country clip MTV put into rotation - helped the short but sweet album (just over 30 minutes long) lodge at no.1 for a few weeks in the summer of 1986. It remained on the country charts for three years.

Yoakam beat Nashville at its own game just by being himself.

It’s impossible to overstate the importance of this debut. Not only did it introduce Yoakam as a fledgling yet seasoned talent with a voice that comes along once in a generation, but it presented pure country of the Hank Williams Sr. type; amplified and energized, to a new, younger audience. Yoakam found himself in the enviable position of being supported both by college stations and standard commercial country ones. He kept tweaking the formula, resulting in 1993’s This Time, a triple-platinum monster that cemented his status as a timeless artist whose influence will linger long after he stops releasing music.

Although Guitars, Cadillacs…is over too quickly, each of its ten tracks resonate and reflect on Yoakam’s dedication to a style popular before he was born. The singer/songwriter’s durable melodic sense and effortless way of telling a story is displayed on tracks like ‘It Won’t Hurt’. There, he takes the voice of a broken-hearted guy who unsuccessfully tries to drown the sorrow of a wrecked relationship with whisky. On the acoustic ‘Miner’s Prayer’ he displays his Kentucky bluegrass roots in a story that captures the coal miner’s desperation in doing a job that will lead to his death. The latter’s lyrics of “…when I die, dear Lord in heaven. /Please take my soul from ‘neath that cold dark ground” seem to be written by a broken-down old man who has been spent his life in the Kentucky mines, as opposed to a mid-20’s country singer who only heard about that world from his relatives.

Credit is due to Pete Anderson, too. As guitarist and producer, he struck the perfect balance between rock and roll’s energy and honky tonk’s heartfelt emotions. His slicing, often reverb-enhanced six-string provided the punchy rockabilly edge that spotlighted Yoakam’s already powerful songwriting. His work behind the boards gave the singer’s voice room to shine, making this partnership a perfect meeting of the minds. Sadly, business/legal issues separated the pair in 2001 (they have reportedly not spoken since), yet both would likely credit the other’s ability to craft music that found a crossover audience even label executives couldn’t have imagined existed.

Yoakam also single-handedly took the word “hillbilly” - once a derogatory term to describe backwoods folk (see the 60’s US show The Beverly Hillbillies) - and made it not just respectable, but almost classy again. He titled his second album Hillbilly Deluxe and opened live shows with the self-deprecating aside “It’s just old hillbilly stuff”.

If there was any question that Guitars, Cadillacs…was a milestone in country, that was erased when Rhino reissued it as an expanded double-disc in 2006. This “Deluxe Edition” included all 10 of the 1981 demos and a crackling 45-minute 1986 live show performed at the Roxy in LA before a vibrant crowd, including early fans John Fogerty and Emmylou Harris.

At this point, you’re probably eager to hear it, whether for the first time or again - but not so fast; The album was recently pulled from streaming services due to a million-dollar lawsuit Yoakam filed with Warner Brothers to regain his copywrites, as the disc logged its 35th anniversary.

Check the used bins and online sales to try and nab a piece of country music history, because with Guitars, Cadillacs, Etc., Etc., Dwight Yoakam created a minor masterpiece; one that sounds as fresh and honest today as when it was first cut over three decades ago.

You can purchase Guitars, Cadillacs, Etc., Etc. from Holler's selected partners below: 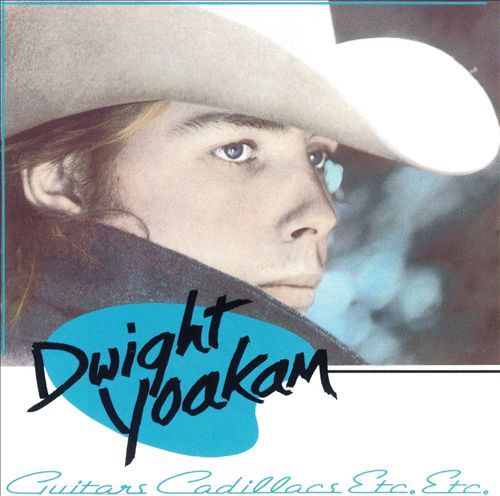