The tenacious work ethic of Suzy Bogguss meant she was never going to drop off the radar after her platinum-selling, hit-filled heyday.

The singer-songwriter from Aledo, Illinois was a flagbearer of early 90s country, with such signature hits as 'Outbound Plane', 'Drive South' and 'Hey Cinderella', alongside a run of platinum and gold albums.

Now, with frequent touring, close attention paid to her UK and international audiences and a creative hand on the social media reins, Bogguss has continued to delight fans, both old and new.

Suzy spoke to Holler about how she and husband, musician, engineer and road manager Doug Crider run Nashville's most charming cottage industry.

It's been so impressive watching everything you’ve been up to online - you certainly refused to give in to the pandemic era.

I needed an outlet because I was not able to work, and I didn't think it was going to be for as long as it was. I started with some little guitar lessons, then I realised I wasn't a very good teacher of guitar! Then I started the Wine Down Wednesday thing, and I've now done over 90 in a row.

One of the cool things is I’ve been able to have friends over to sing together. My mom, who's 99, still looks forward to it. Also, my guitar playing has improved, because every week I've got to learn three or four new songs. At the shows I've been able to do, it's remarkable that either I mention Wine Down Wednesday, or the audience will. It's selling tickets!

So do you feel you've used your time at home wisely?

I never would have taken this time off. I needed some time to really stop and think about where I am and what would make me happiest.

This year, Kathy Mattea and I are taking a tour out, just two old friends. We're calling it Together At Last because we've been talking about it for years. Back in the day, we did some big arena shows with Mary Chapin Carpenter, and it was always a blast.

This is different because we're doing small theatres, and it’s just the two of us. She's playing lead for me, I'm playing lead for her, we're singing the harmonies and telling stories of 32 years of friendship.

Not every artist would have the nous to run their own online subscription club either.

There's a little ring on my phone when somebody joins my Inner Circle, and whenever I hear it, it makes me happy. Having an engineer in the house has been really fortunate. When we first started out, when I did it the very first time, about 200 people signed up really quickly, and then it's kind of stayed around that, maybe 220, sometimes 250 patrons. We're mailing out all the t-shirts every week, so we are definitely a family business now.

With running your own operation, and then dealing with all the challenges of Covid, did it feel like you had to 'adapt or die'?

It kind of did. When I started the subscription, nobody could come in and out of the house, so I had to play every instrument on the first cut I did, which was the Finn Brothers song 'I Won't Give In'. I played drums, and I'd never played bass or electric guitar. I played the mandolin which I borrowed from Gretchen [Peters]. We couldn't even see each other, she left it on our front porch.

Then last year we released a single, 'Sunday Birmingham', that's going to be on an album. I hope we can get it done by late spring.

You did a lot of promotion for the 30th anniversary of Aces, and unusually you did it with your old label, Capitol. How did that work, and can you believe that record is 30 years old?

I know, I make jokes that I was the first eight-year-old to go platinum. Here's what's scary about getting older: it feels like I just celebrated the 25th anniversary of it by making the Aces Redux album, like, last week.

So, after I had left Capitol, after they had left me too, I did a couple of records for two guys out of Texas, one of them is a guy named Brad Turcotte. I was Brad's first concert, when he was like nine, now he's at Universal [who own Capitol].

He's been interested in all the stuff I've been doing to keep my name out there, and it came up that we could do a little press for Aces. They own it, so the main thing I get out of it is some press, and I'm feeling a little bit of a bump in my streams, so that's helpful.

Did that campaign bring new people to your work?

There were so many people who just didn't know that I was still making music. It was a lot of people who were young when my [earlier] music was coming out, and then they got caught up in being parents. I'm getting their children coming to my shows, so it's kind of been a beautiful passing of the baton.

What strikes you now, going back to Aces?

It really has dawned on me how lucky I was to record songs by long-lasting and talented songwriters that were not only prolific but also just quality. People like Nanci Griffith ('Outbound Plane') and Ian Tyson ('Someday Soon').

I'm very proud that I was supportive of songwriters because it's a different world now. Everybody wants a cut of everything they do. I knew that those people had material that was perfect for me, and I wanted to shed some light on them as well.

Four of the songs went up the charts, so I do all four in my show every night. Even after me, some of the Miranda Lambert type folks sang those songs growing up. I've seen people use 'Someday Soon' on American Idol and The Voice. It also felt like I'd been given the chance to try to do something that was truly my own.

I think you also have a culinary project up your sleeve, don't you?

I've been doing a cookbook. We usually have a big party at my house on my birthday, December 30. We call it Suzy's Soup Night, I make huge pots of soup, and it's a big music jam.

We get Jeff Hanna, I've had Mac Davis sometimes, John Bettis and T-Bone Burnett. It's such a great time, everybody sings a song. Gary Nichols will come in and do some blues, and Keb’ Mo’ was here last time. It morphs from the jazz to more poppy stuff and then Jeff Hanna holding court with 'Let's do Grateful Dead.' It goes late, let me just say. It's about 60 or 70 people.

The book is recipes that I've found around the world from all my travels. Doug is doing the pictures and I'm doing the styling, because it's just been us at home. I've borrowed dishes from friends, Kim Carnes has a recipe in there and Kathy Mattea has one too.

Do you get to feel the appreciation of other artists who followed you?

There are definitely little pockets of friends. I went to sing a benefit with Ashley McBryde the other day, and she knew every word to Aces. She knew those songs inside out because I was one of her heroes, as Emmylou Harris was to me.

The Redux edition of Suzy Bogguss' classic album Aces is out now via Loyal Dutchess Records. You can purchase the album from one of our selected partners below: 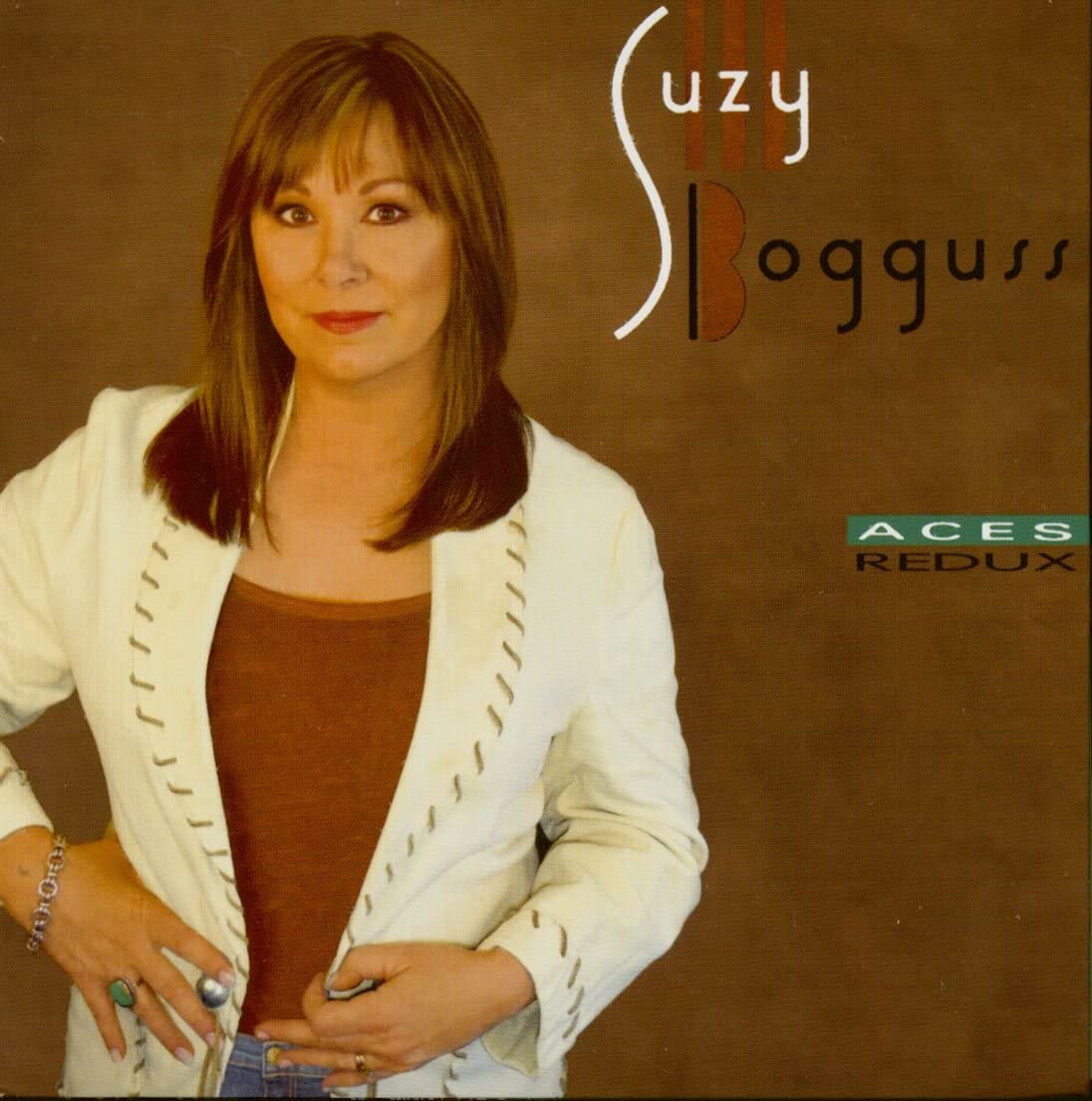