North Carolina native Priscilla Block commanded Nashville’s attention in August 2020 when her heartfelt ballad ‘Just About Over You’ - which she released without the help of a major record label - skyrocketed to No. 1 on both the iTunes Country Chart and the all-genre iTunes Chart just hours after its official release. The song first found viral success on TikTok, earning millions of views and sending music fans clamoring for Block to officially release the song.

She had plenty of musical arsenal where that came from, such as the hilarious yet empowering body positivity anthem ‘Thick Thighs’ and the real-as-it-gets track ‘PMS’, proving she can write elegant lyrics and pointed zingers with equal aplomb.

One month later, Block signed to one of Nashville’s most prominent country labels, UMG Nashville, home to superstars including Carrie Underwood, Eric Church, Luke Bryan, Keith Urban, and more—a dream for this singer-songwriter who has paid her dues by writing songs and playing Nashville clubs for the past six years.

She started off 2021 with ‘I Bet You Wanna Know’, which replicated her chart-topping iTunes success. Block spoke with Holler about her country music dreams, whirlwind success, and what is next on her bucket list. 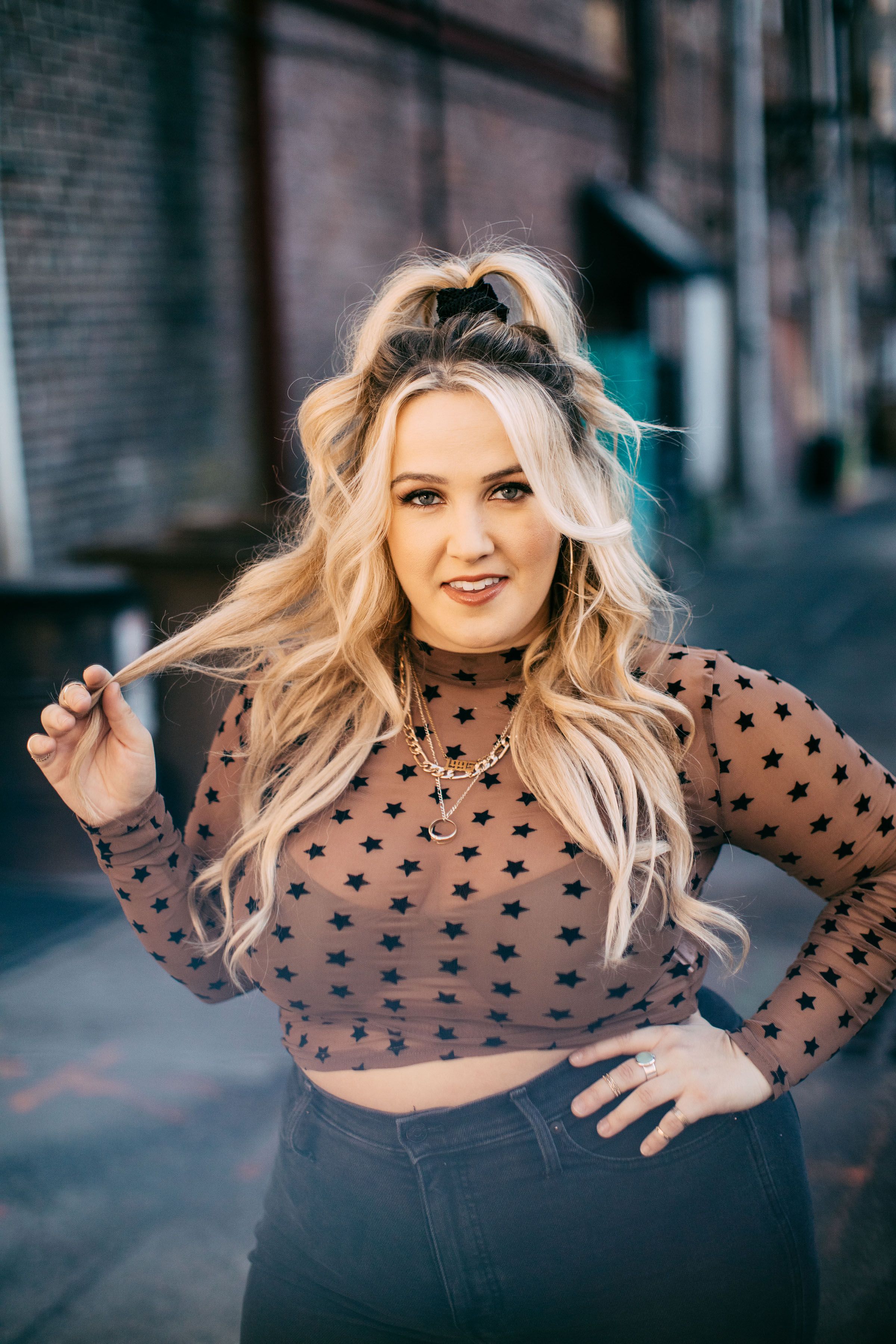 I always had the radio blaring in my bedroom and loved country music. I started writing songs when I was 15 - I picked up a guitar and couldn’t put it down. I would play my songs in coffee shops, and family and friends would be like, “You wrote that? You should move to Nashville and do this.”

What was it like when you did move to Nashville?

My first year in Nashville was pretty rough. I was an 18-year-old girl and I didn’t know anybody in town, and I worked at a yogurt shop in the Hillsboro Village area. I actually had a conversation with my sister one morning, and I was like, “I’m drowning just trying to pay my bills. I moved here to write songs and I’m not even writing songs.” We even talked about me moving back home. That same day, Taylor Swift happened to drive by as I was wearing a Taylor Swift shirt. She pulled her car over on the side of the road because she saw me, and she was like, “I love your shirt!” It was awesome! It was just what I needed - I quit my job right after that and focused on music again.

How did you find your crew of co-writers?

I was kind of fearless! I would slide into anybody’s DMs, I would show up to songwriter showcases and take notes of who performed and what songs they sang. Then later I would go and see them perform again and just introduce myself. I knew Nashville is a very supportive community and that I needed to pay my dues in the songwriter world. My roommate at the time, Sarah Jones and I started co-writing a lot together. That built my confidence in co-writing.

Your viral TikTok song ‘Thick Thighs’ is all about body positivity and is rife with truth-telling, hooky lines like, “I can't be the only one who likes extra fries over exercise/And never eat the produce that I buy”.

Yeah! We first put out ‘Thick Thighs’ like two years ago. I was like, “Y’all, I’m not writing another heartbreak song today. Can we write something fun, like about thick thighs?” I was totally joking, but Emily [Kroll] looked at me and said, “We are so writing that.” We laughed that entire writing session. I wrote it for myself, just being this curvy girl. I never knew we were going to put it out until the first time we played it live for the first time. By the time we got to that chorus of “Thick thighs save lives,” everyone was cheering. I was like, “Oh, wow. The world might need this song.” I just like to keep it real, whether I’m writing about heartbreak or failing every single diet in the world.

I’m sure you’ve seen the pressure female artists have to look a certain way or be a certain size. Did you have any hesitation about pursing a music career because of that?

I don’t say this to seem conceited, but I’ve never doubted myself when it comes to music. I knew I loved it so much, that I was going to go and figure it out. But there is tons of pressure on women in country music. I’ve been told a million times, “You need to go lose 30 pounds if you want to make it" - time and time again that I need to look a certain way. It helps when the fans are behind you and loving everything you do. There are definitely hard days, but all in all, I’ve never seen myself doing anything else, so I don’t let doubt and fear get in the way.

How do you handle haters on social media?

If you’re getting hate, then you are doing something right. There are going to be lovers and haters. I try not to let it get to me. I have to be confident in what I’m doing and keep moving forward.

"The day after I released 'Just About Over You', I was getting calls from every single label in Nashville"

There was a three-week span from the time you wrote ‘Just About Over You’ until it reached the top spot on iTunes. What was that like for you?

I started putting songs on TikTok and it was frickin’ awesome! I was like, “I’m going to keep feeding this app like crazy and see what happens.” I don’t think I slept for an entire month. I wrote that song during quarantine with two girlfriends over FaceTime. I had no clue the song would do what it has. The next day people were begging me to put the song out and putting up their own money for me to record it. I knew there was such a moment happening, that I needed to take it and run fast. The day after I released it, I was getting calls from every single label in Nashville.

You just released ‘I Bet You Wanna Know’, which has also reached No. 1 on iTunes.

That was a fun song to write and it shows my sassy side. I wrote it from a relationship point of view, a breakup, but it really goes out to anybody who has walked out of your life. Especially when they start to see you are doing good, they start coming back around. And I’m like, “Wait, didn’t you hate me in high school?”

And now you’re signed to one of the biggest labels in Nashville! What’s it like?

Honestly, it brings tears to my eyes every time I talk about it. I was never the girl that was jumping at the words “record deal.” You hear horror stories about people signing record deals. But I knew the right situation would happen. With Universal, I feel like the luckiest girl to have people who are so successful being in my corner. When I signed my deal, I couldn’t pay my rent and I had to move out of my apartment. I moved into this house that barely had working air conditioning - and I sweat, ok? I’m a sweater. The day I was taking my Universal signing photo, which we did in my front yard, my neighbors were outside like, “What is going on with that girl?” So it was awesome. It’s all part of the story.

I feel like I’m checking off bucket list things every day. I want a super successful career in country music. I want No. 1 songs. I want Grammys. I just want to tour and have a happy life.

Priscilla Block's most recent single, 'I Bet You Wanna Know', is out now via UMG Nashville.