When it comes to British summer weather, the only thing you can rely on is that it will always be unreliable. Following a week-long heatwave on the lead up to the Flying Mojito Bros’ sold out open air party at East London's Dalston Roof Park, on the morning of the show biblical rain descended and carried on long throughout the day, washing out post-pandemic picnics and flooding streets all over London.

But refusing to feel disheartened, the flame keepers of country disco funk delved deep into their DJ bag for a three-hour set of New York disco, peachy country funk and 70s west coast yacht rock, lifting spirits and transforming the rain-soaked roof top into a dazzling honky tonk discotheque. Sometimes you have to get your sunshine from somewhere other than the sky.

After notching up an impressive CV of country-funkified remixes, this summer the duo worked their magic on Rudy Norman’s cult AOR track ‘Back To The Streets’ - releasing it as a Flying Mojito Bros Refritos 12” - whilst their latest mixtape sees them reworking disco music recorded by country artists in the late 70s to spectacular effect. 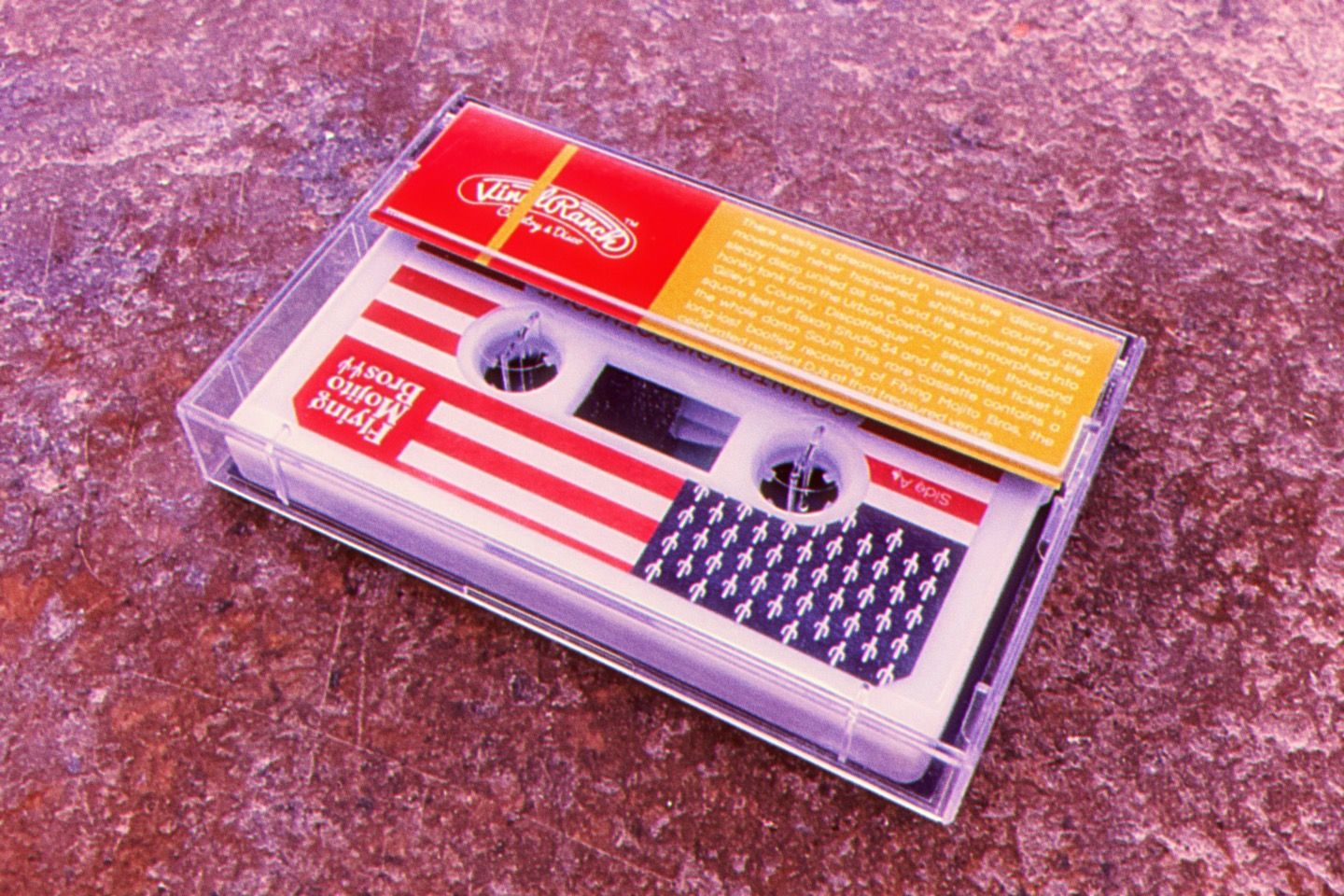 Drawing on original vinyl releases from their vast collection, the Flying Mojitos Bros have re-edited, mixed and applied their sparkling signature production sound to the music, curating an imaginary DJ set at a make believe dive bar on the crossroads of country funk, smoky mezcal, dance floor euphoria, cosmic sunsets and fish tacos.

So you get disco Dolly Parton, Mac Davis and Ronnie Milsap taking turns spinning underneath the mirror ball, alongside deep cuts from Travis Wammack, Janet Michael and Denise McCann. Sweet Potato Pie turn ‘Ode to Billie Joe’ into a Northern Soul floor-filler, while Carlene Carter throws her hair up in a whale sprout and reworks ‘Ring of Fire’ as a Hi-NRG shopping mall pop banger.

Worth picking up for CW McCall’s ‘Windshield Wipers In The Rain’ alone, the mixtape is being released in collaboration with Vinyl Ranch, everyone’s favourite original urban cowboy and cowgirl clothing brand, country disco DJs and Alan Jackson meme account.

Flying Mojito Bros sat down with us before their set to talk us through some of their choicest cuts of country disco, while we all tried our best to ignore the thunderclouds rolling in over their shoulders.

You almost certainly don’t need us to tell you what an amazing songwriter Prine is – but not gonna lie, I didn’t know a whole lot about him until recent years. Being invited by our pal Joe Harvey-Whyte (The Hanging Stars, Magic Numbers, Tony Visconti) to DJ Prine-adjacent originals between sets at the tribute night at the Jazz Cafe in December was the perfect excuse to delve deeper. This cut is pure fire country funk – with his inimitably sardonic storytelling taking it next level. So irresistible. I mean – “Go buy a griddle!”

I’m a huge fan of Elton’s first 10 albums, which were all written, recorded and released in a staggeringly prolific period of about five or six years. Tumbleweed Connection struck a particular chord with me because of its country influence emulating The Band, and I loved almost everything about it from the album artwork (my vinyl had the original lyric book with old fashioned western style pictures and images) to the production. Of course the songwriting was incredible, as was the musicianship. This particular song is more unusual for Elton in being guitar-led, and so beautiful and nostalgic for me.

Dan the man Horne (Circles Around The Sun, Grateful Shred) covering one of Canned Heat’s very best songs brilliantly here – a proper toe-tappin’ headnodder. This solo EP jumped right out at us not too long ago thanks to its variation of cosmic country feel and sounds. He’s an undeniably cool cat, being involved production/session-wise with other records we’re into by Mapache (those mexi-cali harmonies!), Jonathan Wilson (guitar monster!), Pacific Range (deadhead wizards!) among many more besides. Tuck on in and never look back.

A good friend introduced me to Little Feat, saying how Led Zeppelin loved them in the 70s. This song (and subsequently many more of Feats’ Lowell era) was a favourite of ours on tour, which coincided with a period in which we were travelling to LA and the US fairly regularly to play as session musicians. At the time I was also reading a book called Cocaine Cowboys by Barney Hoskyns about the Laurel Canyon scene in LA in the 70s which got me obsessed and made me want to live there! One of those trips we played Coachella and had a memorable week driving around LA in an SUV – one day we took our version of a sightseeing tour by driving down Laurel Canyon to see houses that would have once been the location for legendary late-night-tequila-fuelled jam sessions from favourites like CSN, Neil Young, Joni and Jackson Browne.

Here’s a top banana we met online through music (the best thing!). Matty JMVII got in touch inviting us to remix a track from his then-upcoming solo album Stoned When I Pray – the pick for us being the super slow and greasy track 'Nickel & Dimin' which, we couldn’t quite believe, also features a rap by the legendary Augie Meyers of the Doug Sahm Band. It was wonderful meeting Matty when he visited London a couple of years back playing with his old punk band – he’s as lush in real life as we’d hoped. Will definitely be collaborating with him again – we’ve been sharing demos recently.

This song and album send me back to a great time in my life of listening to loads of records and moving to London to start university. It was one I inherited from my Dad along with many other great classic 60s/70s records. He bought it in Canada at the time of its release, which I love. In later life I discovered the Andrew Weatherall remix of the excellent Saint Etienne cover of this song from 1996 on Heavenly Recordings. For me, that’s an eternally inspiring example of a remix, turning this into something electronic that really, really works. Plenty of the record-buying public at the time agreed.

What does one do when leaving one of the first and most successful TV superstar boy bands of all time? Start a cosmic country rock band of course! This guy is the badger’s nadgers. So many styles, such wry, disaffected humour shining through the lyrics and a real knockout sense of place (the vast, dusty west) are projected through Nesmith’s solo works. Props to pedal steel maestro Red Rhodes on most of the records too. Utterly spectacular.