Favorites opened the gateway for country across the seas, breaking records in a place where not even its own superstars could hold those kinds of records. 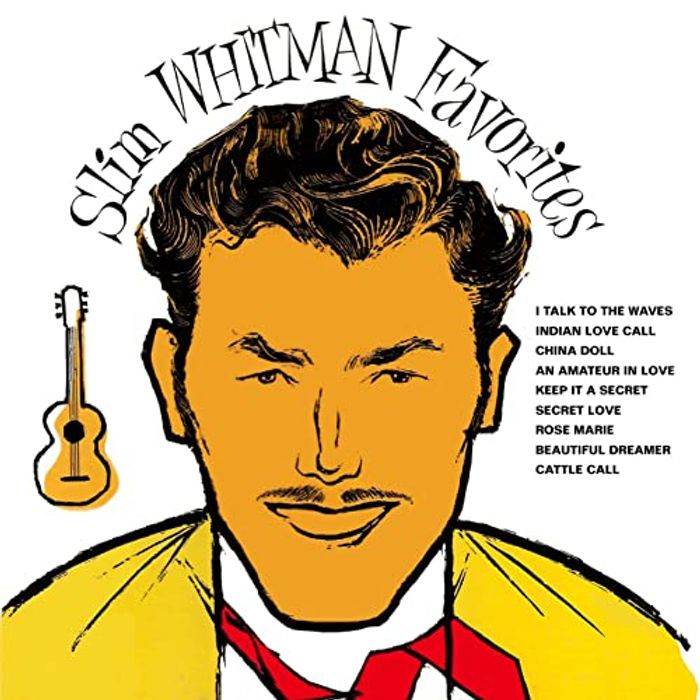 The 1950’s were an unprecedented time for American music; a golden age where the King was crowned, an impromptu jam session captured one of music’s most infamous photographs and the Nashville sound was beginning to assert its dominance.

Meanwhile, across the Atlantic, war-time favourites such as Vera Lynn were still enjoying success, as new talent like Cliff Richard emerged in the latter stages of the decade. Once the likes of Presley and Cash had broken through at home, their popularity began to grow overseas too - but for one artist, it would happen the other way around.

Slim Whitman, now commonly referred to as ‘America’s Favourite Folk Singer’, was consistently more popular in the UK than in the States; climbing to the top of the UK charts long before his homeland would pay him any real attention.

The Florida-native’s voice was often considered to be too polished for Country; continuously he would push against the lyrical stereotypes, opting instead to sing more laid-back romantic tunes. Critics would brand his style as Countrypolitan – but what really set him apart from the field was his yodelling abilities.

Whitman wouldn’t embark upon a music career until he left the Navy, after serving in the second World War. His first big break into the industry came from Elvis Presley’s future manager, Colonel Tom Parker.

The Colonel landed him a deal at RCA Victor, but despite having a contract with a major label, he couldn’t afford to make ends meet – keeping a part time job whilst he toured through the late 40’s and early 50’s.

It was in 1954 that things began to change for Whitman - following on from his first top 10 Country single ‘Love Song of the Waterfall’, Whitman released his life-changing record, Favorites. Around the same time, he would embark on a tour across America, leading to Elvis’ first official concert; The King was paid fifty dollars to open for Whitman, bringing him to the attention of the Colonel.

It was one particular song from Favourites that would kick start his long relationship with the British audience - ‘Rose Marie’, from the Operetta of the same name. In the summer of 1955, the song entered the chart at number ten, two weeks later knocking Alma Cogan off the top spot. It would remain there for 11 straight weeks, setting a record for the longest consecutive number of weeks at number one in the UK charts - a record which wouldn’t be broken for another 36 years.

The simple production on the UK hit makes room for Whitman’s vocals, shining the spotlight on his famed falsetto during the pay-off. It’s easy to see why Whitman captured the hearts of young girls at the time, as he sings of a simple, clichéd love throughout the record with such a smooth croon.

‘Rose Marie’ wasn’t the only single from Favorites to capture the hearts of the Brits. Whitman showed off his yodel on his own take of ‘Indian Love Call’, again taken from the Broadway musical.

The swooning melodies helped to make this a pop-culture classic; Whitman’s version showing its longevity with its appearance in the film Mars Attack! four decades later. His home fans would look on it more favourably too, the track climbing to no.2 in the Country charts.

The simplicity of the stanzas in ‘China Doll’ again make room for Whitman’s Yodel; a hard technique to master, but Whitman would make it sound easy. This could be attributed to his early influences - growing up he cited Jimmie Rodgers and Gene Autry as inspirations.

Though Whitman went on to record some classic country songs further on in his career, the songs that featured on Favorites - though fully infused with a Country sensibility - didn’t necessarily fit the trend of the genre in America at the time.

However, they would help to bridge a gap between the States and Europe for the genre to cross. The way of life in Britain was so far away from the Honky Tonks and Southern Living that was often sung about at the time; but with Favourites, Whitman introduced stories that were more relatable to the Brits, whilst maintaining that Countrypolitan sound.

The record oozes with positivity, romance and a hint of nostalgia right from the start; “Remember the days when we walked by the sea” the album begins, immediately showing its alluring sentiment.

‘Talk to the Waves’ has that first dance feel to it, as Whitman caresses the simple words every girl longs to hear; his classical vocal style gives every last word a new shine to it as he brings the song to life. Whitman making the listener feel loved whilst showing his own vulnerabilities and naivety, “When your lips meet mine, the stars all smile in kind, for I am just an amateur in love”.

Favourites boasts a simple production with subtle country undertones within the instrumentation, allowing all the focus to shift onto the lyrics and Whitman’s voice.

His operatic range is on full display for ‘Cattle Call’, a typical country narrative packed with impressive yodelling. This wasn’t the only track on the record to perform well on the US Country charts.

The Calamity Jane song ‘Secret Love’, which begins with Whitman’s whistle and footprints, clinched the no.2 spot - while ‘Keep it a Secret’, the Waltz time song, went to no.3. His clear, sophisticated tone is coupled with the lush, traditional sound of the pedal steel. The song, written by Jessie Mae Robinson, became somewhat of a favourite for Slim Whitman - he would go on to record it again later on in his career.

Shortly after the release of Favorites, Slim Whitman was invited to become a member of the Grand Ole Opry. While his popularity in America was never a sure thing – only having minor hits in the US through the sixties and seventies - he continued to have success on the UK albums chart throughout this time.

He only really became a household name across America through his TV marketing campaigns during the ‘80s; The TV Albums led him back to mainstream Country success – while also making him the butt of every TV host’s jokes. Whitman nevertheless would laugh all the way to the bank.

Favorites opened the gateway for country across the seas, breaking records in a place where not even its own superstars could hold those kinds of records. Yet perhaps most importantly, he inspired a whole new generation of successful artists from a range of different genres, cultures and backgrounds. Slim Whitman’s legacy lives on in this very record.

Slim Whitman's Favourites is out now via Imperial - listen below.