The Black Crowes - The Southern Harmony and Musical Companion

Though Southern Harmony was followed by The Black Crowes’ slow descent from mainstream visibility, it marked the beginning of a vibrant creative streak that still resounds beautifully this many years later.

If we look back at 1992 through the lens of that year’s most popular hit songs and albums, several major commercial developments stick out across a host of genres. Of course, there’s no way to form a complete picture of a time by digging only as deep as the top of the charts, but the mainstream stratosphere is where the story of The Black Crowes’ second album The Southern Harmony and Musical Companion begins.

With the runaway success of their multi-platinum 1990 debut Shake Your Money Maker, The Black Crowes’ bluesy, Southern-tinged brand of rock and roll was initially viewed — not without reason — as a knockoff of the quintessential 70s sound canonized by British blues-rock groups like The Rolling Stones and The Faces. Interestingly enough, however, the Atlanta outfit was marketed within the context of the reigning hard-rock paradigm of the day. Which meant that the Crowes existed (and built their following) largely within the hair-band sphere.

As longtime/former drummer Steve Gorman wrote in his tell-all memoir Hard to Handle: The Life and Death of the Black Crowes, “we were in magazines next to [bands like] Cinderella and Winger.” That all changed when The Southern Harmony and Musical Companion arrived in record stores on May 12th, 1992.

With a cover photo that bore a resemblance to the artwork of 1969’s eponymous sophomore effort by The Band, as well as a title that consciously referenced the deep well of American roots music, Southern Harmony announced a dramatic shift in both sound and identity for The Black Crowes.

From the slinky opening strains of lead single ‘Remedy’ - one of four songs from the album to hit number one on Billboard’s album-rock chart - the growth was strikingly clear. They now possessed the musical acumen to wear the past on their sleeve as if they had earned the creative licence to make something new and entirely their own out of what their forebears had done.

In short, Southern Harmony showed that The Black Crowes were no longer guilty of style over substance. They also had help. For starters, it’s impossible to overstate the chops, sophistication and musical sensitivity of keyboardist Ed Harsch and lead guitarist Marc Ford, both of whom joined in time to record the album, rounding-out what would come to be known as the band’s classic lineup.

As the perfect vehicles for the quantum leap taken by the group’s songwriting nucleus of rhythm guitarist Rich Robinson and frontman Chris Robinson, Harsch and Ford both possessed a touch that made every style the band tried seem natural, like it had belonged to them — and to us as listeners — all along.

Looking back, it’s something of a small miracle that the album struck a chord with the same youth generation that was rocking to the likes of Faith No More, Soundgarden and the Red Hot Chili Peppers. Songs like ‘Thorn in my Pride’, ‘Hotel Illness’ and ‘Bad Luck Blue Eyes Goodbye’ all percolate with shades of a sepia-toned past, evoking dusty country roads as the band channels acoustic folk, electric blues, gospel, country twang, Southern rock and classic rock with an overarching ambience inspired by soul recordings made at the legendary Alabama recording studio Muscle Shoals.

To say the least, the new lineup gelled. The basic tracks, in fact, were cut more or less live by the whole band, with some passing muster in just one or two takes. As the late Harsch told VH-1 in the Crowes’ edition of Behind the Music, “the spontaneity was obviously there; it was totally like making a blues record.”

With all that said, though, the music on Southern Harmony couldn’t have fallen into place the way it does without the addition of background vocalists Taj Artis and Barbara Mitchell, who steal the show with a buoyancy, soulfulness and power that’s downright hair-raising.

It’s because of Artis and Mitchell, for example, that the band’s rendition of Bob Marley’s ‘Time Will Tell’ comes across so convincingly, a reggae tune transformed into something like a hymnal from a Southern church service. Indeed, ‘Time Will Tell’ captures The Black Crowes shedding the affectations of ‘Hard to Handle’, and Southern Harmony is the album where all the pieces came together for them.

Oddly enough, the album found success — debuting at number one and going double-platinum in the U.S. — amidst a commercial climate it was somewhat out-of-step with.

Rock bands parlaying roots influences into mass appeal was nothing new, and there was a well-established template for rockers (Tom Petty, etc) who flirted with country stylings and vice-versa (John Cougar Mellencamp, etc). But what’s fascinating about Southern Harmony is that it can be viewed in retrospect as a precursor of the cross-pollination that was soon to come between the worlds of country and rock.

In mid-1992, the tidal currents in music lifted the boats of the surging alt-rock movement to the same level as juggernauts like Guns N’ Roses, Metallica, U2 and R.E.M. This seismic shift, incidentally, was driven in no small part by Southern Harmony engineer Brendan O’Brien, who’d recorded Shake Your Money Maker before going on to produce Pearl Jam’s Ten and Temple Of The Dog, among others.

Meanwhile, mainstream country acts like Garth Brooks, Wynonna Judd and Billy Ray Cyrus became massive, while alt-country’s insurgent rise was underway. The truth is that Southern Harmony didn’t have much to do with any of those camps. But when we look back from today’s vantage point, is it so hard to imagine ‘Thorn in my Pride’ catching on with country fans?

Southern Harmony didn't exactly make rock radio safe for country music, but it does tantalize us with possibilities of what might have happened had popular culture been in the same genre-fluid headspace as the band was at the time — a headspace more fans (and musicians) inhabit today, arguably, than in 1992. That the latest incarnation of the Crowes just played the 2022 Stagecoach festival would suggest as much.

In Hard to Handle, Steve Gorman recalls the band’s appearance at MTV’s 1992 VMA awards, the same one that infamously featured a feuding Guns N’ Roses and Nirvana. Gorman declined to go to the afterparty, leaving early to fly back to his wife so they could start a vacation. “Had I known how the rest of the decade was gonna shake out,” he writes, “I might’ve stayed around for a bit. We never got that close to the center of it all again.”

Maybe so, but they didn’t have to. Though Southern Harmony was followed by The Black Crowes’ slow descent from mainstream visibility, it marked the beginning of a vibrant creative streak that still resounds beautifully this many years later. Above all, perhaps, what you hear on the record is the sound of a band finding itself even as it wanders off the trail.

Southern Harmony was released in 1992 via Def American. You can purchase the record from Holler's selected partners below: 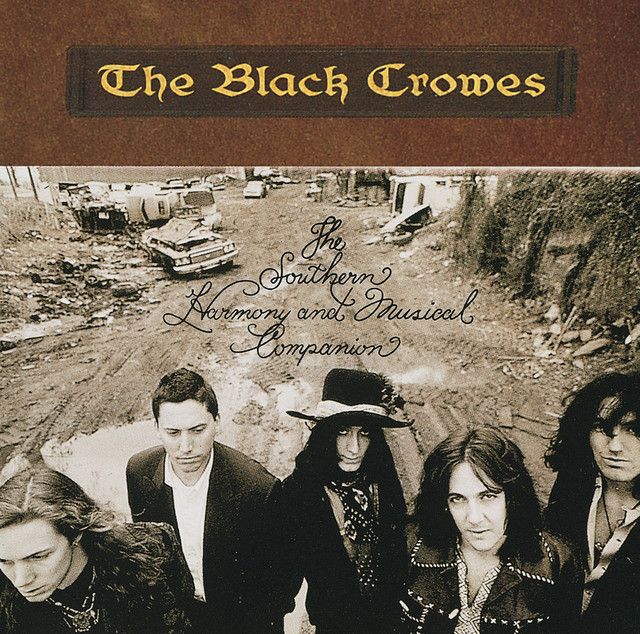