There is never a moment throughout this saga when the playing, singing and vocals feel anything less than earthy, honest and pure. That’s quite an accomplishment for this expansive hour and a half listen, particularly one where lyrics are so crucial to its enjoyment.

Still, Southern Rock Opera, the audaciously titled third studio offering from Athens, Georgia based Drive-By Truckers, had to overcome major challenges to even get released.

First off, the outfit was barely a blip on the popular map at the outset of the 00s. The five-piece only had two studio sets and a live disc to their name in the four years preceding SRO’s appearance. None garnered much traction other than those around their hometown and in nearby Atlanta who saw them perform in tiny venues.

Additionally, the outfit’s jokey name and pun-happy album titles such as Gangstabilly, Pizza Deliverance and the live Alabama Ass Whuppin’ - with tunes like ‘Panties in Your Purse’, ‘Buttholeville’, and ‘Too Much Sex (Too Little Jesus)’ - didn’t promise the sharply observed and deeply insightful lyrics about growing up in the South that the songs delivered.

Toss in the stature and distribution of the small-even-by-indie-standards label Soul Dump, along with the misfortune of being released in the first week of September, 2001, it's what can best be described as an inauspicious batch of circumstances in which to unleash a sprawling, 90-minute long, 20-song opus.

The recording sessions weren’t easy either. Southern Rock Opera was tracked in the upstairs of a uniform shop in Birmingham, Alabama during a heatwave; all the air conditioning and fans were turned off in order for noise not to be picked up by the microphones. The group also worked from 6PM to 6AM.

“Southern Rock Opera was fun to write but we had a miserable time making it” frontman Patterson Hood is even quoted as saying.

Then, after finishing, the money ran out. Using their financial creativity, the Truckers created a prospectus, promising 15% interest to raise funds. It worked; the $23,000 generated was enough to press 5000 copies and distribute them. Once a buzz was generated, they again ran out of capital to press more.

Enter the Lost Highway imprint, a subsidiary of Universal, who reissued it about a year later, unfortunately without the lavish 24-page book of lyrics and further paintings by Wes Freed, who also did the cover art and has continued to work with the band through the present.

The SRO journey was a long, hard slog from conceptual inception six years earlier until the resulting critical and popular embrace. It’s especially impressive considering the project is not an easy listen. The story, split between the two discs, revolves around an unnamed protagonist (Hood dubs him “our hero”), who narrates most of the material. He describes maturing from a teenager to a man in the southeastern section of the US in the late ‘70s.

There are recurring mentions of “the duality of the Southern Thing”, a theory about how the politics and social impressions of this region are perceived by others and the truth behind that curtain. The reoccurrence of Lynyrd Skynyrd (‘Ronnie and Neil’), and specifically the plane crash where some of Skynyrd’s original members died (‘Shut Up and Get on the Plane’) is the thread that ties these songs loosely together.

The three-guitar DBT lineup (before Jason Isbell joined) shared with Skynyrd doesn’t sound much like that legendary band. Rather it creates the assumption that much of this song cycle is driven by the backstory of its two writers and how they reacted to the events around them.

That’s obvious as Hood narrates ‘Three Great Alabama Icons’, explaining his coming of age in a revealing, explicit, spoken word soliloquy as the band chugs behind him. It’s a true tale of some of Hood’s experiences, name-checking icons of the South in politics (George Wallace), sports (Bear Bryant) and music (Ronnie Van Zant), while providing a backdrop to the rest of the selections.

The second disc finds our anti-hero narrator fronting a successful rock and roll band but questioning whether it was worth it. Songs like Cooley’s blues-rocking ‘Women Without Whiskey’ and Hood’s thumping ‘Let There Be Rock’ boast details anyone alive at the time can relate to.

DBT’s three guitars intertwine and mesh together with a roaring but never over-the-top grind, providing Southern rock stability; one that doesn’t devolve into a ‘Free Bird’-styled attack of fret shredding soloing. While the “rock opera” title suggests otherwise, there are just a few characters other than the main one recounting the words. One of those is the devil, who welcomes ‘Wallace’, the one-time titular segregationist Alabama governor, to hell.

While Hood takes the majority of lead vocals with an urgent voice that sounds like crushed gravel, some of the set’s finest moments come from Mike Cooley, specifically when his twangy, less aggressive vocals wrap around ‘72 (This Highway’s Mean)’. Here he sings about the temperature on the highway - “It’s the kind of heat that holds you / like a mama holds her son” - as the song gradually builds to a crescendo. Hood claims that Cooley’s ‘Zip City’ is his favorite track, the telling of a troubled family life in the first person.

There is never a moment throughout this saga when the playing and singing feel anything less than earthy, honest and pure. That’s quite an accomplishment for this expansive hour-and-a-half listen, particularly one where lyrics are so crucial to its enjoyment.

The Drive-By Truckers would continue on to become one of Americana’s most durable, dependable, ruggedly ambitious and lyrically astute outfits over the next 20 years and counting.

Their two 2020 albums found them in roaring shape, electrified by the divisive political situation, making it quite clear that they haven’t lost an ounce of their intensity since Southern Rock Opera introduced them to a wider audience. 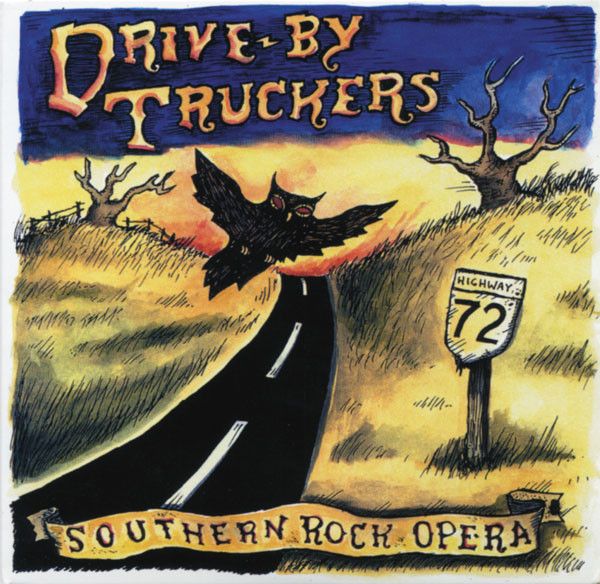