The Wooks pay homage to bluegrass tradition while pushing the boundaries of the genre on their third studio album, Flyin’ High.

The Wooks pay homage to bluegrass tradition while pushing the boundaries of the genre on their third studio album, Flyin’ High.

Their first two records each featured different lineups, and this one is no different. On Flyin’ High, the band welcome Allen Cooke (dobro), George Guthrie (banjo) and Johnny Calamari (bass) into the fold, resulting in some of the band’s most progressive sounding music yet.

Take ‘Other Side’ for example. Written by the band's lone remaining founding member, guitarist CJ Cain, the song was written as a means of keeping the memory of his dear friend Steve - who died in early 2020 after a battle with leukemia - alive. Sonically inspired in part by both Phish and The Allman Brothers Band, the tune features tripped out banjo gymnastics from Guthrie to go with the abstract lyrics and layered harmonies that the band are known for.

Cain tips his hat to his folk and southern rock influences like The Band and Bob Dylan on ‘Mudfish Momma’, a co-write with Ray Clark.

While the song is a love letter of sorts to Cain’s favorite fishing spot in Florida, it quickly turns into an abstract and mythical tale about a mermaid who occasionally visits him on his adventures, always leaving him with a fish tale sure to make his buddies assume he’s been hitting the sauce a little too hard.

On the flip side, the album gives a considerable nod to the band’s bluegrass roots as well. The best representation of this comes on ‘New Peace of Mind’; mandolinist Harry Clark sings of buying a plot of land in the Ozark Highlands of Northwest Arkansas while a honky tonk beat led by fiddler Nate Leath leads the sit-in.

Further pushing the album into traditional territory is the partnership with Bill Wolf, a longtime producer and collaborator of guitar legend Tony Rice who Cain cold-called and recruited to come in and master the project. It’s not just the bluegrass numbers that Wolf and the band managed to transform.

A reimagination of John Prine’s 1978 hit ‘Iron Ore Betty’ anchors the back half of the album with a steady, foot-stomping beat. In a similar fashion, a cover of Arkansas-based singer-songwriter Willi Carlisle ‘What the Rocks Don’t Know’ holds down the album’s first half. Typically performed by Carlisle acapella with no instrumental accompaniment, The Wooks’ version of the song veers toward the opposite end of the spectrum, offering a high-strung bluegrass medley fit for the occasion.

Despite the high turnover of changes to their lineup, Flyin’ High stands out as the group’s most polished, sonically diverse creations yet. No matter who has been a part of The Wooks, they have always possessed a consistently high level of songwriting and a tight musical groove.

The recent additions of Guthrie, Calamari and Cooke have only helped to push the band’s creative boundaries even further, resulting in easily their best album to date.

The Wooks third album, Flyin’ High, is out Friday, February 25th. You can purchase the record from one of Holler’s selected partners below: 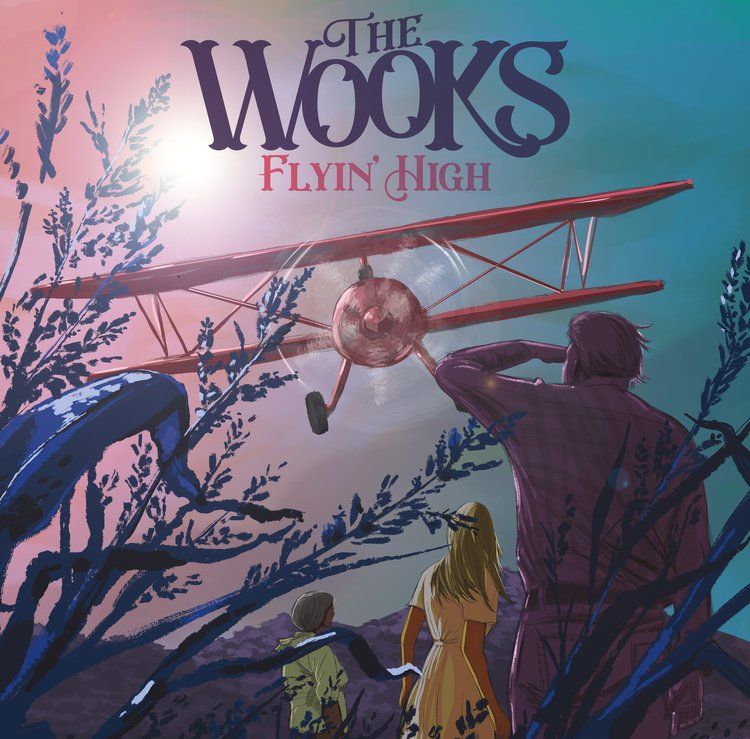