The Flatlanders - Treasure of Love

While it may not be The Flatlanders at the top of their game, any fan of pure Texas country will find lots to relish on this collection. The tunes are terrific and it remains a treat to hear these troupers clearly having fun working at this late stage in their lives. 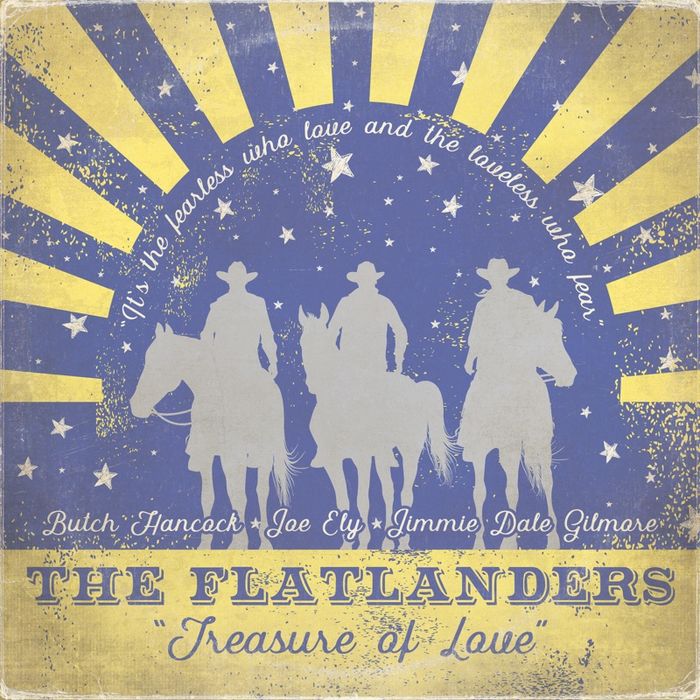 Any outfit whose debut is shelved and ignored, only to be released 40 years later as an afterthought, is starting off on a faltering foot at best. Such is the troubled history of The Flatlanders, a now-legendary partnership between Lubbock, Texas singer/songwriters Joe Ely, Butch Hancock and Jimmie Dale Gilmore.

After disbanding, when it was obvious nothing was going their way, the trio made names for themselves individually as rugged, non-commercial, outlaw-styled talents akin to Willie Nelson, Waylon Jennings, Guy Clark and Ray Wylie Hubbard. But since The Flatlanders pre-dated most of these acts, these three amigos are now held in high regard as ahead of their time.

The band’s new album, Treasure of Love, marks their first release since 2009’s Hills and Valleys. Containing four originals and 11 covers, the influence of Leon Russell (the rather obscure ‘She Smiles Like a River’), Dylan (Gilmore taking lead on a sweet ‘She Belongs to Me’), Johnny Cash (the typically bittersweet story-song ‘Give My Love to Rose’) and Ernest Tubb (the dark emotional ballad ‘I Don’t Blame You’ performed by Ely) complete the tracklist.

Although all three contribute instrumentally to every tune, just a few harmonies support the lead singer throughout. Each selection feels remarkably complete and, thanks to Ely and Maines, the end result is coherent, even with each of the guys’ distinct voices. Don’t get your hopes up expecting sparkling Crosby, Stills & Nash styled congruence though. Rather, each member takes a turn to lead, with the others playing and occasionally adding somewhat scrappy vocal backups. An acoustic cover of Tex Ritter’s ‘Long Time Gone’, with Hancock and Gilmore harmonizing, shows what might have been if they had more time to refine this concept.

Only an impressive closing take on the classic ‘Sittin’ on Top of the World’ takes full advantage of The Flatlanders as a band. All three trade lead vocals to develop the tune into a pure country-rocker, complete with energized twangy lead guitar. It’s arguably the highlight and not surprisingly the lead single.

Regardless, it remains a treat to hear these troupers clearly having fun working at this late stage in their careers. The tunes are terrific and, while it may not be The Flatlanders at the top of their game, any fan of pure Texas country will find lots to relish on this almost collaboration of roots music veterans still obviously loving what they do as a team.

Treasure of Love is out Friday July 9th via Thirty Tigers.