How great were The Band? Great enough to craft ten remarkable songs that remain moving and often exhilarating, even under trying and some might say demanding circumstances. 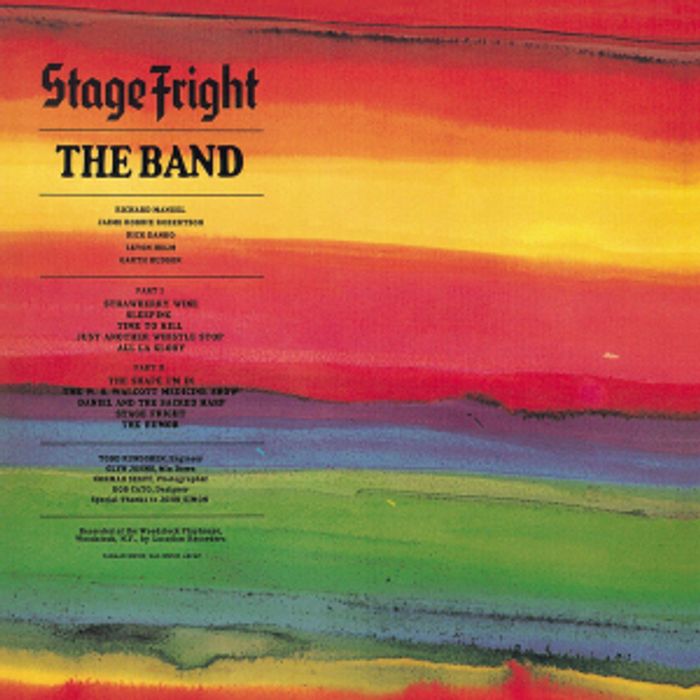 How great were The Band? Great enough to craft ten remarkable songs that remain moving and exhilarating, even under trying and demanding circumstances.

“They gave this ploughboy his fortune and fame / since that day he ain’t been the same” go the lyrics to ‘Stage Fright’, the title-track of The Band's third release. In retrospect, they can clearly be seen as a metaphor for the group’s internal issues in 1970, as recording began and would continue under fractured conditions.

The combination of wealth and accolades, along with near unanimous critical acclaim showered down upon the quintet after the one-two punch of 1968’s Music from Big Pink and their 1970’s self-titled classic, created more problems than these guys were prepared for. Where the musicians “once were brothers,” as the title of 2020’s splendid documentary states, they were now a dysfunctional family. “It was over after that second record,” said drummer/singer Levon Helm to Billy Bob Thorton in the documentary Ain’t in It for My Health, referring not necessarily to The Band’s music, but the camaraderie that created it.

The complications these philosophical brethren - a tight knit unit that created music so seamless and unified it seemed to emerge from a single organism - faced are clichéd at this point. Drug and alcohol abuse (including heroin), excessive money, egos and the various trappings of celebrity suddenly came into play. “I’m here to tell you it’s a crying shame to see what success can do to some people. Dealing with this wasn’t in the fucking manual man,” once said bassist/vocalist Rick Danko about that period.

After so many years of struggle while being the backing band to Ronnie Hawkins and Bob Dylan, this unexpected bad behavior practically torpedoed the Stage Fright sessions.

To add to the communication problems, members arriving late and sometimes not at all, the album was self-produced - which left them without a leader. Robbie Robertson brought in a young Todd Rundgren, who he’d worked alongside on Jesse Winchester’s debut, to engineer. Rundgren’s speedy work-ethic clashed with The Band’s more moderate one, making things even more tumultuous. Somewhat amazingly though, recording was completed in two whirlwind weeks in the early summer of ‘70, the shortest time for any Band project, before or after Stage Fright.

Robertson envisioned a sunnier set, after what he felt was the seriousness of the group’s first two records. While there is some of that feeling in the music, specifically in the frothy, almost throwaway roots-pop of “Strawberry Wine” and the jaunty ‘Time to Kill,’ there is, especially in retrospect, a gloomier lyrical undercurrent to much of the material. “Oh you don’t know the shape I’m in” on the surface seems innocuous enough, particularly atop the bluesy, funky thump of the melody, but a closer inspection of the words “Out of nine lives, I spent seven,” could be seen as cautionary advice, perhaps from writer Robertson to singer/pianist Richard Manual whose alcoholism was becoming debilitating to his life, in and outside of the group. The Old West surroundings of the spry ‘The W.S. Walcott Medicine Show’, with its words “There’ll be saints and sinners, you’ll see losers and winners”, might initially appear to refer to the titular fictional travelling outfit, but was likely a metaphor for the pitfalls of the record business, which played no small hand in The Band’s various concerns.

Robertson, as primary songwriter, claims he wanted Manual and Helm more involved in that process, but together they contribute only three co-writing credits, with Robertson the sole author of the other seven tunes. Manuel’s lovely, laconic ‘Sleeping’ remains one of his most affecting vocals; even if the sprightly ‘Just Another Whistle Stop’ is one of their less memorable musical moments, his singing is passionate and convincing, specifically when expressing the song’s ominous lyrics “To grind your axe until it’s dull / you’ve got to get it in your skull.” Elsewhere, Robertson gets personal on the haunting ‘All La Glory’ (about the birth of his child) and uses the title track - arguably the set’s most arresting moment with its striking, opening piano riff - to reflect on The Band’s reaction to its popularity.

The harmonies of Danko, Helm and Manuel, so powerfully engaging in the past, are missing on the majority of Stage Fright. But for the poignant, potent ballad ‘The Rumor,’ propelled by Danko’s fat bass lines, all three take a verse and often even share one. It’s a rare example of vocal solidarity that’s frustratingly absent from most of the collection.

Like The Band’s previous two 50th Anniversary reissues, Stage Fright’s audio is markedly improved by Robertson and Bob Clearmountain. The fresh mix infuses these already crisp tapes with even more presence, without losing the organic vibe so endemic to their music.While the deluxe box includes a 5.1 DVD audio surround mix and different cuts (acoustic stripped down takes on ‘Strawberry Wine’ and ‘Sleeping’) are added, the alternate mixes amended in the 2000 reissue are oddly, and disappointingly, MIA. Raw, fly-on-the-wall, cassette-quality ‘Calgary Hotel Room Recordings’ of the guys messing around are dredged up, but don’t amount to much.

Far better is the 20 song, 80-minute live performance, recorded June 1971 at London’s Royal Albert Hall, that comprises the second disc. It’s a thrilling experience. Regardless of the trials the guys faced in Stage Fright’s formation, they gelled on stage with the one-for-all spirit that was largely dissipated from their recent studio album. Robertson even boasts it was “One of the greatest live concerts The Band ever played,” which, considering the quality of some of the group’s other stage recordings (Rock of Ages and The Last Waltz), is saying plenty. The show combines selections from all three of their albums, with a few Motown covers. The newly remixed audio is stunning and the performance, even of older songs like ‘The Weight’ which they had been playing at virtually every gig for years, is fresh, spirited and finds each member performing and singing at peak level. Garth Hudson’s always creative keyboard work is particularly impressive, but in general it’s hard to believe a concert this mind-blowing was sitting unheard in a vault for 50 years.

Those who haven’t yet experienced the delights of Stage Fright are fortunate to be able to hear it in its most exquisitely reproduced version. Fans of The Band will likewise appreciate enjoying these songs in fidelity as classy and organic as the group itself.