Experiencing this wonderful revitalization of Cahoots should spark renewed interest in what remains one of The Band’s still worthy efforts. 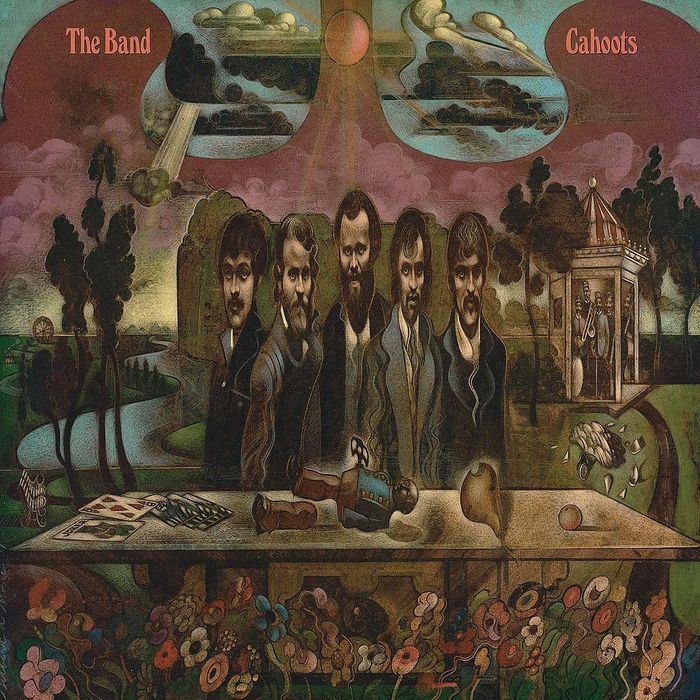 When Cahoots, The Band’s fourth album in as many years, was released on Sept. 15, 1971, it was dismissed by critics and fans as their weakest yet. That sentiment was even shared by the group.

There were plenty of reasons contributing to that less than effusive response. Tensions first exhibited during 1970’s Stage Fright - particularly drugs and alcohol, difficulty handling worldwide fame and personality squabbles among the five members - only escalated between the making of the two records.

On top of this, working in the unfinished Bearsville studio - built by their manager Albert Grossman - caused technical problems getting the music on tape. One thing the group could agree on was how uncomfortable they all felt there.

“We weren’t studio cats. We were so used to our clubhouse vibe. In this case, there was none of that,” said Robbie Robertson. Now the sole songwriter, Robertson didn’t have enough material ready when recording began.

The lack of an outside producer for the first time - someone who could corral these musicians and focus them on the task at hand - further contributed to the complications. “At the beginning of these sessions, we didn’t know if we were actually making a real record,” Robertson reflects in the liner notes.

The inevitable result was a batch of songs that, while exhibiting the rustic, rootsy, Americana influences The Band typically marinated in, generally lacked the enthusiasm, authenticity and overall joie de vivre prevalent in their previous work.

In retrospect, the fact that Cahoots came out sounding as respectable a product from such a world-class band as it did was something of a triumph, particularly when considering the circumstances hampering its creation. Nevertheless, only ‘Life Is a Carnival’ made it into their sets and survived through to their Last Waltz swan song. That speaks volumes about how The Band felt about this project.

Those pushing play are greeted by two of Cahoots’ highlights; the aforementioned ‘….Carnival’ and the Bob Dylan/Robertson co-write ‘When I Paint My Masterpiece’, the latter remains one of Dylan’s finest moments. From there on in, the going gets dicier.

Inclusions like ‘Last of the Blacksmiths’, ‘Smoke Signal’ and ‘Volcano’ aren’t terrible, but lack any form of memorable melody or lyric. Even with the ever-distinctive voices of Levon Helm, Richard Manuel and Rick Danko in full bloom, they never craft anything close to the outfit’s better accomplishments.

The presence of ‘4% Pantomime’ - a freewheeling, unfocused jam with Van Morrison and Richard Manual making up words (something about a poker game) - exemplified the lack of solid songs. While ‘Where Do We Go from Here’ was ostensibly about the loss of traditions due to changing times, it could just as well have been questioning The Band’s future.

Still, listening to this radically remixed edition proves these tunes are better than most gave them credit for. That’s especially true of ‘The River Hymn’; with its gospel backing, Helm’s always emotional singing (particularly when his voice unexpectedly cracks on some high notes) and Garth Hudson’s typically joyous organ. This would have made a logical addition to their second album. It should have been hailed as the superb closing track it is.

Robertson, one of only two remaining original members still alive, doesn’t create revisionist history by fiddling with the running order of Cahoots, as they did with last year’s similarly tweaked Stage Fright. He went one better.

Handing the master tapes over to veteran engineer Bob Clearmountain, Robertson gave him carte-blanche; instructing him to start from scratch and remix the tracks as if he had never heard the originals. It’s quite the juicy assignment.

The result justifies his trust in Clearmountain’s talents, as the revised Cahoots makes it ripe for reassessment.

Not only is the sound clearer and crisper, with increased definition, but instruments that had been buried under a sonic carpet are now brought up to the front. None of this improves the quality of the songs, which remain inferior at least by The Band’s standards. However, hearing them anew provides a richer view of the quintet’s always powerful playing and singing that’s frequently obscured in its original form.

The harmonies of the two, sometimes three voices reveal intricacies in the vocal arrangements formerly difficult to discern. Everything has greater punch and presence, especially evident in Garth’s always imaginative keyboards and the bottom end of the rhythm section.

Following the blueprint of the three existing 50th-anniversary packages, this adds a previously unavailable live show on the second disc. Unfortunately, it’s not very good. Only the closing section of May 1971’s two-set evening at Paris’ Olympia Theater was captured.

Eleven tunes (none from Cahoots) fill about 40 minutes, with a rough but listenable mono mix apparently the best the producers could uncover. Since the professionally recorded Rock of Ages and the New York Academy of Music show from New Year’s Eve 1971 captured The Band in full flight on this tour, there is little need for these mediocre Paris tapes.

Some rarities, like a wonderful alternate look at ‘When I Paint My Masterpiece’, an early take of ‘Endless Highway’ and the obscurity ‘Bessie Smith’, along with a few instrumental versions of Cahoots’ selections, round out the extras, most of which are of passing interest to only the most fervent of fans.

Nevertheless, experiencing Clearmountain and Robertson’s wonderful revitalization of Cahoots places the album under a more positive light, something which should spark renewed interest in what remains one of The Band’s lesser but still worthy efforts.

The Band's Cahoots (50th Anniversary Edition) is set for release on December 10th via Capitol Records / UMe. You can pre-order the record from one of our selected partners below. 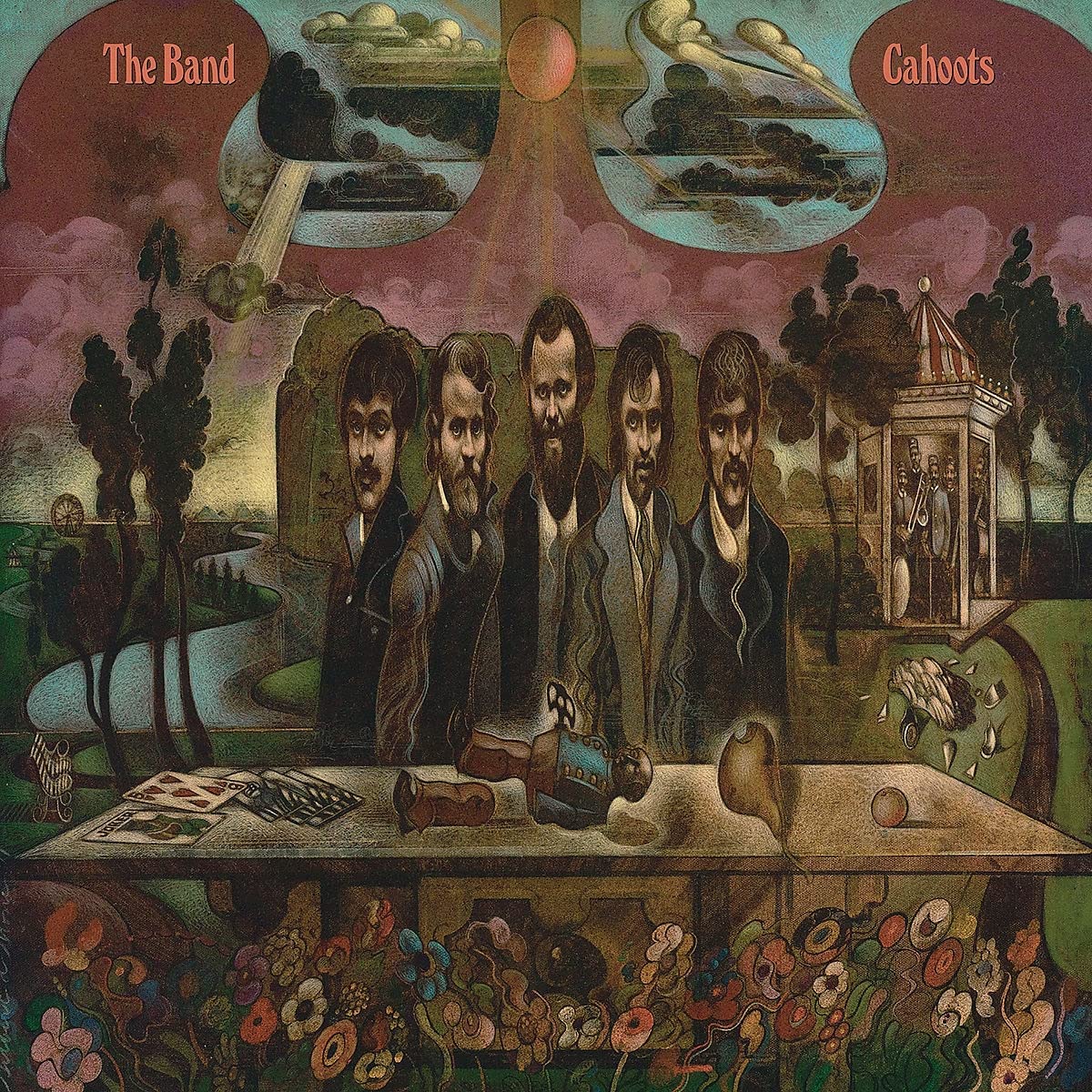