Dance Songs for Hard Times is high-spirited, rambunctious roots music and a soundtrack to help dance away the blues - pandemic or otherwise. 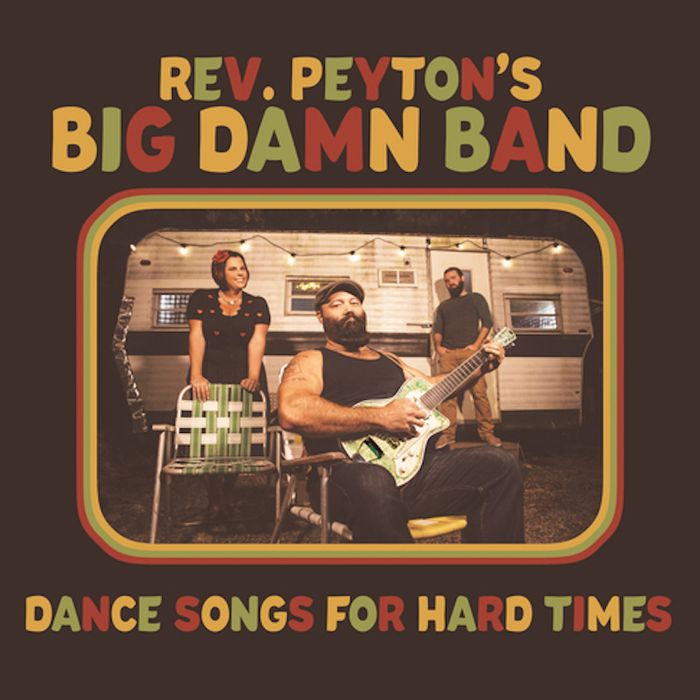 Randomly pick a track from Rev. Peyton’s Big Damn Band’s new album and you'll always experience something different. Some may think the trio sound like ZZ Top, others might hear the stripped-down rockabilly of Eddie Cochran, perhaps the raw slide guitar blues of Elmore James, the Delta stylings of Bukka White or even the indescribable clatter of Captain Beefheart. It's likely that Peyton and his clan would be delighted with any or all of those comparisons. Still, recording these diverse songs during the complications of the previous months was something of a triumph.

You don't need to refer to the title of the threesome's first release since 2018 to know that these indeed are hard times. For Peyton, they were even harder. His wife and percussionist "Washboard" Breezy Peyton was laid up with a lingering illness for months (she has since recovered). Also, Rev.'s father received a cancer diagnosis (he's beaten that at last report) and the couple's power was interrupted for days in their 150 year old Southern Indiana log cabin, forcing him to write by candlelight. Worse still, the pandemic eliminated whatever cash flow the hard-touring band planned for the past year and counting. So, the fact that Peyton, Breezy and drummer Sad Max Senteney crafted an album this upbeat and occasionally even life affirming, under those trying circumstances, is alone worthy of praise.

From the Junior Kimbrough-styled deep blues/ boogie of opening ‘Ways and Means’, to the roughed-up George Thorogood-inspired ‘Sad Songs’ and the frisky rockabilly twang of ‘Too Cool to Dance’, push play and let the party begin. But beware that it’s not always fun and games. The recurring dark blues riff of ‘No Tellin’ When’ sums up the COVID-19 struggles of the past year. Peyton repeats the title multiple times, but changes the final words, lamenting that there’s ‘no tellin’ when’ he’ll “see my mom”, or “go to work”, or “see my friends again”, in the record’s only solo - and most emotionally riveting - performance.

Peyton keeps rocking even when his lyrical content reflects the frustrations of people on the lower end of the economic divide - with honesty and an understanding only those who live it can convey with unvarnished insight. The three piece makes a lively racket, one that feels like a larger “damn band”. Additionally, Peyton’s distinctive voice is an instrument unto itself. Like the aforementioned Beefheart, he croaks, moans, howls and does vocal cartwheels with a delightfully demented attack that threatens to go off the rails but somehow never does. In the closing, gospel styled ‘Come Down Angels’, Peyton bellows like a backwoods fire and brimstone preacher as he invites the titular heavenly beings back to earth to help because “tribulations got us shaking at the foundations”.

It has undoubtedly been a demanding period for Peyton’s group, but they have made the best of it by putting their frustrations, hopes, disappointments and even social commentary into the music of Dance Songs for Hard Times. It’s high-spirited, rambunctious roots music and a soundtrack to help dance away the blues - pandemic or otherwise.