Peter Rowan - Calling You From My Mountain

Coloring within bluegrass’s established outline, Calling You From My Mountain is another classy, beautifully crafted addition to a catalog and 60-plus-year career that’s as impressive as any in roots Americana. 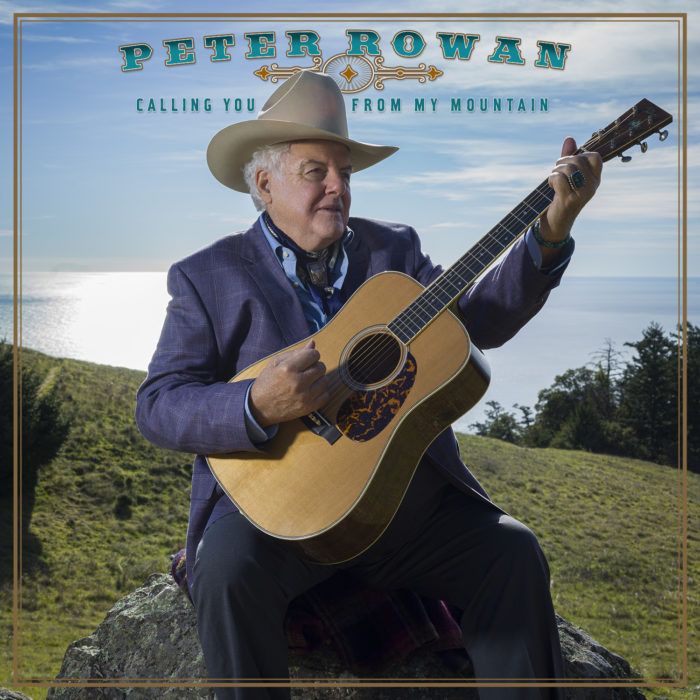 Life in the music business has been, as the cliché goes, a long strange trip for bluegrass veteran Peter Rowan.

From his early days in late-60s/early-70s rock oriented outfits like Earth Opera and Seatrain, to working with the legendary Bill Monroe as one of the Blue Grass Boys at the age of 22 and his brief time backing Jerry Garcia, Rowan has been associated with some of Americana’s most diverse and significant musicians.

He has also released nearly two-dozen albums under his own name, with various backing units, incorporating everything from country to blues, Tex-Mex, folk, Hawaiian, and even reggae (2005’s Reggaebilly!). The only thing that hasn’t changed is the 10-gallon hat he sports on nearly every album cover since 1978’s solo debut. Now at 81, he’s not slowing down… or changing his headwear.

Even with all that diversity, Rowan remains a Bluegrass Boy, not coincidentally the title of his 2006 release. On these 13 tracks he covers Woody Guthrie (‘New York Town’), A.P. Carter (‘Little Joe’), Bill Monroe (‘Frog on the Lilly Pad’) and Lightnin’ Hopkins (‘Penitentiary Blues [Big Brazos]’), adding his own similarly styled rootsy bluegrass originals.

His backing quartet of banjo, mandolin, upright bass and fiddle (but, in staying true to bluegrass customs, no percussion) preserves the music’s deep backwoods acoustic traditions. Originals such as ‘The Song that Made Hank Williams Dance’, a story that imagines the titular icon meeting a woman who matched his own sensibilities, keep the approach fresh with humor and a contemporary lyrical spin.

He also welcomes guests Billy Strings, Shawn Camp and Molly Tuttle to bring youthful enthusiasm to the table. But there is no lack of effervescent energy in either Rowan’s remarkably vibrant voice or his frisky playing. Still, when Tuttle enters, taking co-lead and harmony vocals on ‘From My Mountain’, the effect is especially bracing.

Strings’ lead guitar on the closing ‘Freedom Trilogy’, the album’s longest and arguably finest moment, is less obvious. But the song, which never mentions politics of the recent past in the States yet addresses them obliquely (“All the kings horses and all the king’s men could never put tyranny on us again”), is proof of Rowan’s powerful shrewd compositional abilities and his band’s superior talents winding through the three-piece suite.

Those looking for standard bluegrass need only spin Monroe’s ‘… Lilly Pad’ to hear Rowan and band knock out a carbonated version with the speed and precision the music demands. Ditto for Tex Logan’s ‘Come Along Jodi’, also lyric free, that provides a forum for Rowan’s band to individually solo to electrifying effect.

Strings also contributes to ‘Winning Hand’, a bittersweet country ballad dating back to the 90s which incorporates some Irish threads in its tale of a gambler searching for the titular success in his wanderings. Rowan takes the guise of the nomadic card player on the bluesy ‘Veil of Deja Blue’, a poignant love song about missing his partner due to the lifestyle he has chosen.

“I’m still the pilgrim, interpreting my experience through music,” he states in the promotional notes. This collection doesn’t expand the boundaries of his chosen genre as Rowan has done in the past, but rather colors within bluegrass’s established outline. That makes Calling You From My Mountain another classy, beautifully crafted addition to a catalog and 60-plus-year career that’s as impressive as any in roots Americana.