Throughout Dangerous, Wallen is supremely comfortable in mythologising his home state of Tennessee, crafting a sepia-tinged view of rural America. 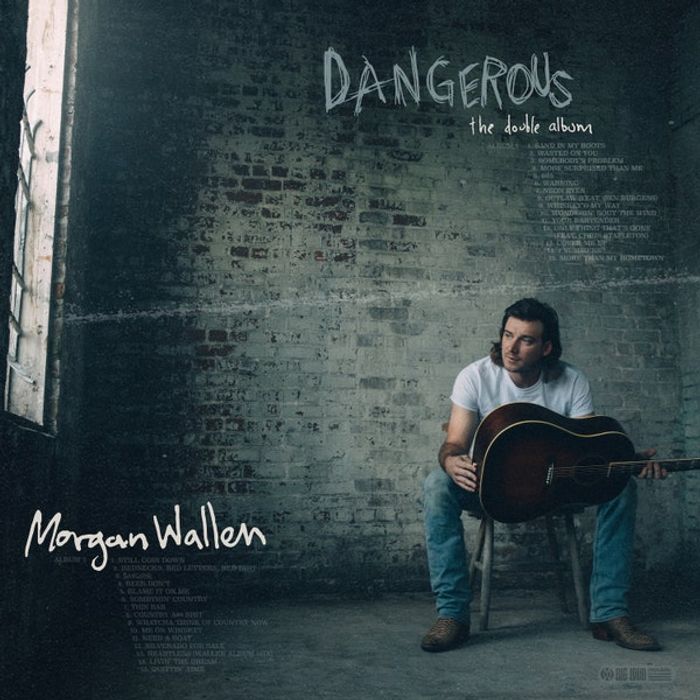 Three years in the making, the son of a Baptist pastor and sporter of a peak-Billy Ray Cyrus straggly mullet, Morgan Wallen, has finally delivered his highly anticipated second album.

While his transgressions in the past year may have piled up alongside his prolific songwriting – even influencing the title track here – the media attention that now follows him is only enticing more fans to his cause. Make no mistake, Morgan Wallen is destined to be huge and he also knows how to make the most of it, teasing fans with snippets of songs on Tik-Tok - knowing full well they'll follow him down this 97-minute long epic journey, just as they’ve now adopted his hairstyle in adulation.

Throughout Dangerous, Wallen is supremely comfortable in mythologising his home state of Tennessee, crafting a sepia-tinged view of rural America. It’s the backbone from which Wallen is able to present his different characters, the seasoned drinker, the vulnerable heartthrob and the southern cowboy.

To some degree, Wallen cleverly mixes and matches them all; ‘7 Summers’, co-written with Shane McAnally and Josh Osborne, is full of sepia-tinged nostalgia, recalling good times with the sun in his hair, imagining he still made his mark on an old flame’s life. With a nod to Springsteen, ‘More Than My Hometown’ admits no matter how many ways he loves his girl, his Tennessee roots will always have his heart.

Across ‘Still Goin’ Down’ he’s more contemplative - clever, punchy wordplay finding its way through winding verses, he checks off small-town life in the sticks, showing how well being the southern hell-raiser and sipping beer on a Friday kind of guy is going down with his increasing audience.

While the record nods to country’s old mavericks, Wallen also garners credibility, once again hinting at a desire to not lock himself into one box. Getting Chris Stapleton involved in ‘Only Thing That’s Gone’ is a remarkable coup; when the singer chimes in with his distinctive tones, it drenches the track with authenticity and yearning, even if it’s for alcohol to drench his sorrows: “Bartender pour me one more/ make it quick and make it strong/ Cos buddy my last drink/ ain’t the only thing that’s gone.”

It’s telling that this is immediately followed by ‘Cover Me Up’, a cover of the Jason Isbell song, with a meditative, stark vocal – one of his best performances here – underpinned by ‘Norwegian Wood’ style simplicity. Across it, it feels like Wallen is looking straight in the mirror and facing his shortcomings, channelling Isbell’s original into his own recent life experience as he touches on sobering up.

The thoughtful closer ‘Quittin’ Time’ offered up by ace songwriter Luke Laird and co-written by Eric Church – is given a wonderful afterlife here, with gentle mandolin-backing from Bryan Sutton ensuring the tempo is kept at a poignant waltz.

From boisterous rockers to ballads, there’s something for everyone here, as Wallen’s songwriting evolves and explores – and he’s clearly got an eye for the best collaborators. Much like bingeing on a compelling, long-running TV show, you encounter good and bad characters across all thirty songs, as Wallen holds the mirror up to himself and to America. The first epic record of the year.

For all Morgan Wallen 2022 tour dates and ticket information, alongside our featured long-read profile, see below.

Morgan Wallen Shares Live Performance of 'Sand In My Boots'

The Rise and Fall of Morgan Wallen

Morgan Wallen Asks Fans To Not Defend Him In New Statement