The Living legend doesn’t only talk the talk, she walks the walk on her fine new record. 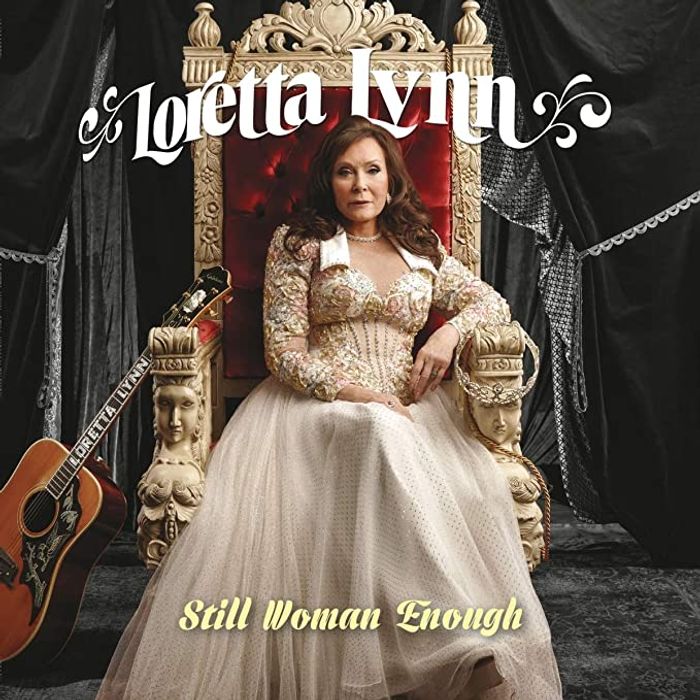 “We girl singers gotta stick together,” exclaims Loretta Lynn. The living legend doesn’t only talk the talk, she walks the walk on her fine new record. Marking her 50th studio album, Lynn celebrates women in country music from across the generations. From duetting with Margo Price and Tanya Tucker, to teaming up with Reba McEntire and Carrie Underwood – it seems the sisters really are doing it for themselves.

From start to finish, Still Woman Enough is filled with career and genre-defining tracks. ‘Coal Miner's Daughter Recitation’ is a homecoming for Lynn’s most acutely autobiographical composition, rejuvenating the 50-year-old lyrics with spoken verses with only Matt Combs’ solitary banjo for company. This is swiftly followed by the remarkable ‘One's On The Way’, with Margo Price, who says her own blueprint as a country artist came from Lynn. Originally a hit in 1971, this rambunctious duet is delivered with obvious, unfettered joy as the friends take a sideways swipe at how the conveyor belt of motherhood can endlessly entrap women – something that, sadly, is still relevant today.

Having icons Reba McEntire and Carrie Underwood jump in for the chorus of the title-track helps create a collective memory for united survivors. As they continue, swapping lines and knowing laughter, it feels like they’re all nodding to each other across the years. Wise and tough, they belt it out as warm instrumentation swells beneath them. Lynn closes the record with ‘You Ain't Woman Enough’, the title track of her first chart-topping album - where she’s found the perfect foil in Tanya Tucker. Defiant to the end, the two throw down the gauntlet, crunching their complementary voices together.

Across the rest of the album, Lynn revisits some of her favourite traditional and self-penned songs. We’re taken from the simplicity of the Carter Family’s ‘Keep On The Sunny Side’ to Hank Williams’ ‘I Saw The Light’, an all energetic hoe-down with blazing fiddle, piano and steel that whirls around Lynn’s revivalist declarations, trading the wrong for the right. Even alongside these tracks, it’s hard to ignore Lister Mosie’s ‘Where No One Stands Alone’; a piano-driven track with a shiver of steel down its spine. A beautifully reframed version of Lynn’s very first single ‘Honky Tonk Girl’, and ‘My Love’, from 1968's Here's Loretta Lynn, are slowed right down, elegantly arranged and subtly delivered.

In a time of uncertainty, this feels like a necessary reminder of the quality and power of good songwriting and strong female performers, lifting each other up while passing on a message of positivity and perseverance to the listener. Loretta Lynn is most definitely, and defiantly, still woman enough.