Jimmie Allen may be tipping a Stetson, but this ain’t old fashioned country. 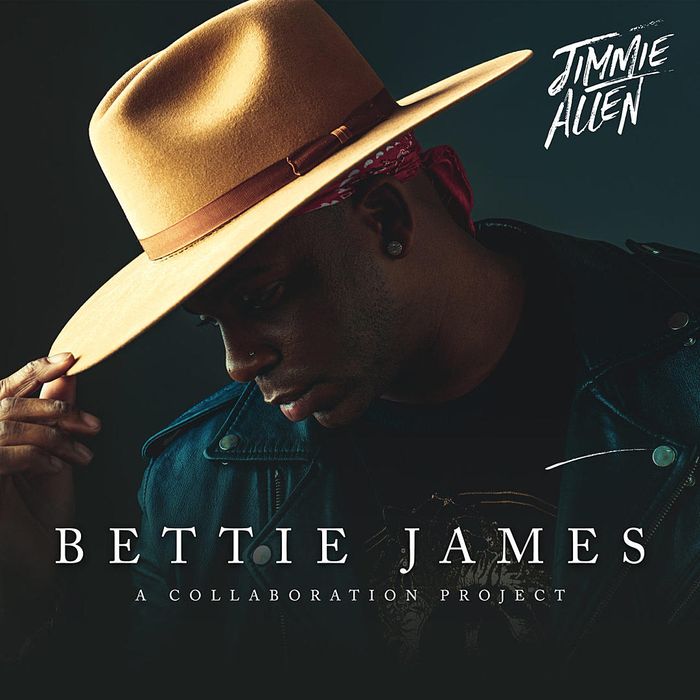 Call it what you will, but Jimmie Allen’s seven-song Bettie James record – named after his late father James and grandmother Bettie – is a sophomore album that really builds on his 2018 debut, Mercury Lane. Allen himself calls it 'A Collaboration Project’, some dub it an EP, yet vitally he proves the Field of Dreams adage “if you build it, they will come” by attracting an astonishing array of old, new, and genuinely diverse talents to sing with.

Songs with newer talents neatly bookend this record, starting with 'Good Times Roll' – one of four songs co-written by Allen – on which his guest vocalist Nelly is clearly having too much fun. It feels epic and celebratory, a real wind-in-your-hair opener. The echoey verse leads into a crashing chorus, with a totally 21st Century feel, but there’s also a nod to country roots with fabulous banjo plucking from Ilya Toshinskiy. The closing song is also the lead single, 'This Is Us', on which Allen duets with rising star Noah Cyrus – sister of Miley, daughter of Billy Ray, and wearer of that infamous body suit – who also happens to be one of the song’s composers. With pop harmonies, it harks back to a time when they were stumbling around “just kids back then, trying to figure it out” before ending up together, underpinned by a feeling of fate and inevitability.

'Drunk & I Miss You' is a neat contrast, as Allen joins with veteran Mickey Guyton, only now getting the plaudits she’s long deserved. This is one of those ever so lonely, Lady A-style, late night cries for help. Soaked in sadness and tinged with regret, it leads superbly into 'Made For These', with another legendary country veteran, Tim McGraw. Here they swap lines more than duet, reinforcing the message that setbacks make you stronger, and dreams have a funny way of coming true, bolstered by the huge guitar sound again from Toshinskiy.

Allen aptly enough gets to sing his carpe diem, seize-the-day song, 'Freedom Was A Highway', with Brad Paisley, who also brings his guitar. It’s all about reminiscing over past days of blue jeans and t-shirts, being summer young, singing along to hip-hop songs and living for Friday, “when the town was the whole world”. They’re having a blast as their voices merge, and there’s another hat tip to their traditions with a sweet mandolin ending.

'When This Is Over' seems to take on added poignancy in this pandemic year, with its lyrics (co-written by the great Laura Veltz) listing all the things they’ll do “when this is over” - taking less for granted, smiling at a passing stranger, becoming more empathetic. Greater depth comes through the impressive guest vocalists here: Tauren Wells, Rita Wilson, and finally the Oak Ridge Boys, who join at the very close of the song.

The most crucial track here is 'Why Things Happen', on which Allen is flanked by his forerunners, ground-breaking African-American country stars, Charley Pride and Darius Rucker, each delivering unique vocals. Underpinned by the crunchy drums of Evan Hutchings, their layered voices spiral around each other. They wonder why things happen like they do – their memories, and the injustices are all around them – and they hanker for a reason on this thoughtful song.

The artwork has Jimmie Allen tipping his Stetson, but this ain’t old fashioned country, and it’s not a retread of Mercury Lane. This is the album that moves him into the mainstream, sees him working with his Nashville peers and idols and establishes him as a genre game changer.

Why I Love: Jimmie Allen on Charley Pride