The six-song project takes the songwriter away from the dark shadows of his debut album and shows us a little more colour. 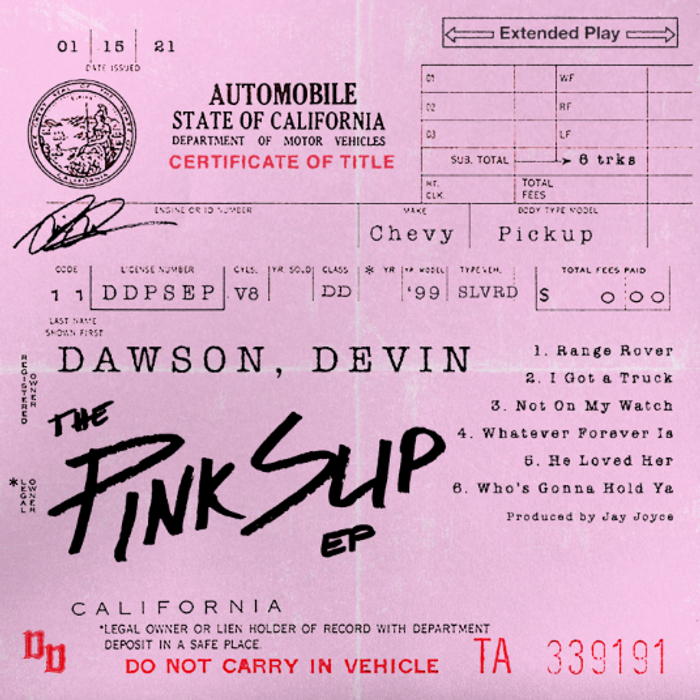 Two years after the release his debut studio album ‘Dark Horse’ and his breakthrough hit single ‘All on Me’, Devin Dawson is back with the energetic ‘The Pink Slip’ EP. Perhaps with a nod to his future intentions, the EP is a sonic departure from his previous work, but with the same quality of songwriting that quickly earnt Dawson a Grammy-nod in the past.

The six-song project takes the songwriter away from the dark shadows of his debut album and shows us a little more colour. Up-beat, pop leaning production frames Devin’s authentic storytelling well; he has a way of telling stories we may have heard before but in a refreshing way. The theme of family, a popular choice within country, is still captivating. ‘He Loved Her’s simple yet catchy melody tells the wholesome story of his grandparents, Dawson’s lyricism painting a picture so vividly in the listeners mind of the kind of man his granddad is. With The Pink Slip, Dawson strived to craft something unique, commenting “I always want to be creating music that’s fresh and different from anything I’ve released before”, he certainly achieves this with ‘Range Rover’. The song feels like a juxtaposition of lyrics and production; the country lifestyle of pick-up trucks and Keith Whitley that he describes is set to polished-pop instrumentation that moulds synths and drum machines into a supremely catchy hook.

Trucks and open roads are a mainstay in the Country narrative, with this record definitely possessing a strong connection to them. Yet it’s not just the lyrics that have a driving theme to them; the energy and production helps to drive it home. The tempo throughout has you longing for an open road to ride down as you listen. The four to the floor of ‘I Got A Truck’ fills you with that sense of freedom that the lyrics allude to. Even ‘Not on My Watch’, which at times feels a little out of place on this album, possesses enough of a sharp melody to keep the vibe up through the latter half. It’s this and ‘Whatever Forever Is’ that really drives Dawson’s music in a completely different direction. It demonstrates how Dawson has evolved as a songwriter and an artist; the ability to write and adapt to the ever-changing music scene in this way is a talent that few possess.

Devin Dawson has delivered an eclectic EP that shines a spotlight on his craftsmanship as a country and pop songwriter. The feel-good factor it encapsulates when coupled with its articulate lyrics, not to mention Dawson’s flawless vocal performance, means this record has laid down the gauntlet in both pop and Country at the start of 2021.