This is classy and complete. It’s likely the last word on how the disparate musical and personal threads of Crosby, Stills, Nash and Young were woven, creating the uneven yet tremendously successful and often musically spellbinding tapestry of Déjà Vu. 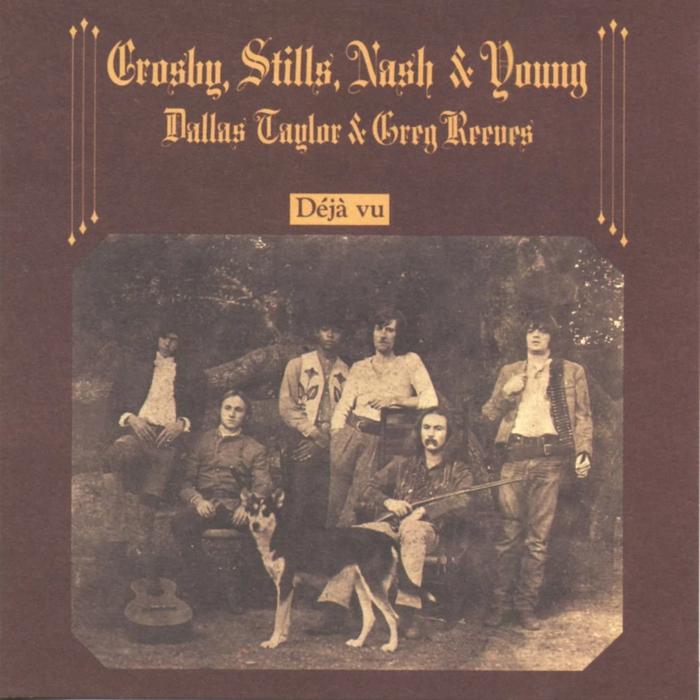 “The first album was a joy, the second was painful” mused David Crosby about the recording of Déjà Vu, a few years after its appearance. That quote - along with many others offered by the four musicians that complete CSNY – can be found in the detailed essay included with this new 50th anniversary expanded edition of the legendary 1970 set. It helps put the renowned second album from Crosby, Stills and Nash, along with new recruit Neil Young, into perspective. This was a difficult venture to birth for the foursome - for those who didn’t know the problems behind its recording, the record was one of the most anticipated releases of that year.

The detailed liner notes to this four-CD box, written by Cameron Crowe with Joel Bernstein, describe the beginnings of both Crosby, Stills and Nash, and their inclusion of Young for Déjà Vu. The addition of Young as the fourth member came after a slew of possible choices, like John Sebastian (who ended up playing harp on the title track) and even the UK’s Steve Winwood, who turned the gig down for a variety of reasons. Young came into the fold at Atlantic Records president Ahmet Ertegun’s suggestion, since he knew how fiery Stills and Young were in Buffalo Springfield. Interestingly, everyone else - including Young’s guitar sparring partner Stills - didn’t initially agree. No one wanted to upset the near-perfect harmony created within the trio. Crosby made a point when he said “Chemistries are magical. They’re like soap bubbles. They’re very fragile”. The threesome also saw Young using the status of CSN as a stepping stone for his own then embryonic career, something few, in retrospect, would dispute. It would be Young himself who would eventually sell each of them on the idea – creating the now fabled iteration of the group.

So began the rollercoaster ride that would yield the immensely popular Déjà Vu which, 51 years later, has sold over eight million copies and is deemed a masterpiece of the era. The three platters that supplement this 50th Anniversary Deluxe Edition are divided into “Demos”, “Outtakes” and “Alternates”. The majority of these 38 cuts have never been officially available - making this a treat for anyone looking to broaden their awareness of the four musicians’ creativity during this era. Yet what the additional tracks really underline is how little collaboration there was between the members, a frustrating situation that inspired the lyrics of Stills’ opening ‘Carry On.’ Since Buffalo Springfield ended in a similar fashion with 1968’s appropriately titled Last Time Around - a collection of Stills’ solo songs cobbled together by producer Jim Messina - he and Young were already experienced in this process.

That doesn’t make it any better though. It’s clear from Young’s two contributions; the melodramatic, widescreen ‘Country Girl’ suite and the wistful ‘Helpless” are highpoints of his career, yet both were crafted mostly alone. They were presented to the band as completed works, without the others’ creative input. Young clearly wasn’t interested in a communal meeting of minds with the new outfit to which his name was appended. The issue is emphasized with a look at the extras included here, only one of which, the plaintive ‘Birds’, is a Young composition. It didn’t make the final cut though, instead ending up on his own After the Gold Rush. One of the few instances of the quartet playing together is the closing ‘Everybody I Love You’ (initially titled ‘Know You Got to Run’) - jointly credited to Stills and Young, it’s much more of a tacked-on afterthought. The title of the subsequent live album, Four Way Street, pretty much said it all.

Other demos and outtakes display nascent forms of songs that were completed elsewhere. Crosby’s ‘Song with No Words (Tree With No Leaves)’, and ‘Laughing’, Stills’ ‘So Begins the Task,’ ‘Change Partners’, and ‘Bluebird Revisited’ along with Nash’s ‘Sleep Song’ were all numbers that appeared on a plethora of post-Déjà Vu solo albums. Crosby and Stills share the bulk of the unused material, the latter responsible for a full eight inclusions on the Outtakes disc. Some, like the simplistically titled ‘Right on Rock and Roll’, ‘I’ll Be There’, ‘30 Dollar Fine’ and ‘Same Old Song’ were inferior to anything on Déjà Vu while also never landing on any subsequent Stills project, at least not in the arrangements heard here.

Adding to the overall alienation within the group were romantic complications. Stills’ relationship with Judy Collins, the impetus for ‘Suite: Judy Blue Eyes', was ending - as was Nash’s relationship with Joni Mitchell (who we hear singing on a lovely early take of ‘Our House’). David Crosby’s girlfriend was tragically killed in a freak car accident, pushing him to depression, while Young also had his own difficulties. That injected darkness into the recordings, exemplified by Crosby’s ‘Almost Cut My Hair’ (a roaring 10-minute outtake is one of this set’s highlights) and the complex, reflective title track.

The previously unheard alternates for eight of the ten tunes (Young’s ‘Country Girl’ is not surprisingly absent, while the “harmonica version” of ‘Helpless’ found its way onto his own Archives Vol. 1) show how the songs morphed into their final state. It alone is worth hearing for those who have lived with this album for decades. Most of the other raw outtakes and demos are interesting and occasionally enlightening but geared to the hardest of their core fans, of which Déjà Vu undoubtedly has many. Still, they are essential to appreciating and understanding the roots of the album. Some, such as a cover of John Sebastian’s stunning ballad ‘How Have You Been’ by CSN are particularly poignant – evidence of how potent the trio could be when they contributed to the common good.

The 18-page accompanying book is filled with rare, generally unpublished photos of the participants in various combinations, all in the same sepia tint that characterized the original vinyl’s retro artistic vision. While Crowe and Bernstein’s essay is detailed and inclusive, there is little mention of drummer Dallas Taylor and even less of bassist Greg Reeves as to their involvement, or lack thereof, in the music’s creation. Both were fired soon after the record’s release (Taylor passed in 2015) and were not a part of the Four Way Street shows. Alongside this, there are no musician credits on the alternates and outtakes - a major omission for a comprehensive examination and dissection of this work.

Regardless, this is classy and complete. It’s likely the last word on how the disparate musical and personal threads of Crosby, Stills, Nash and Young were woven, creating the uneven yet tremendously successful and often musically spellbinding tapestry of Déjà Vu.