A Guide To: A Thanksgiving Menu from the Stars

“We've come to the time in the season when family and friends gather near / to offer a prayer of Thanksgiving for blessings we've known through the year”.

With the words of Johnny Cash’s ‘Thanksgiving Prayer’ ringing in our ears, we stepped off the bus on a rainy Thursday night in London. As the only actual American at Holler, Thanksgiving responsibilities had fallen on Baylen yet again this year. After last year’s plans were so mercilessly cancelled, he was determined to go all out this time, with a mouth-watering spread inspired by the very finest cooks in country music. And Russell Dickerson. 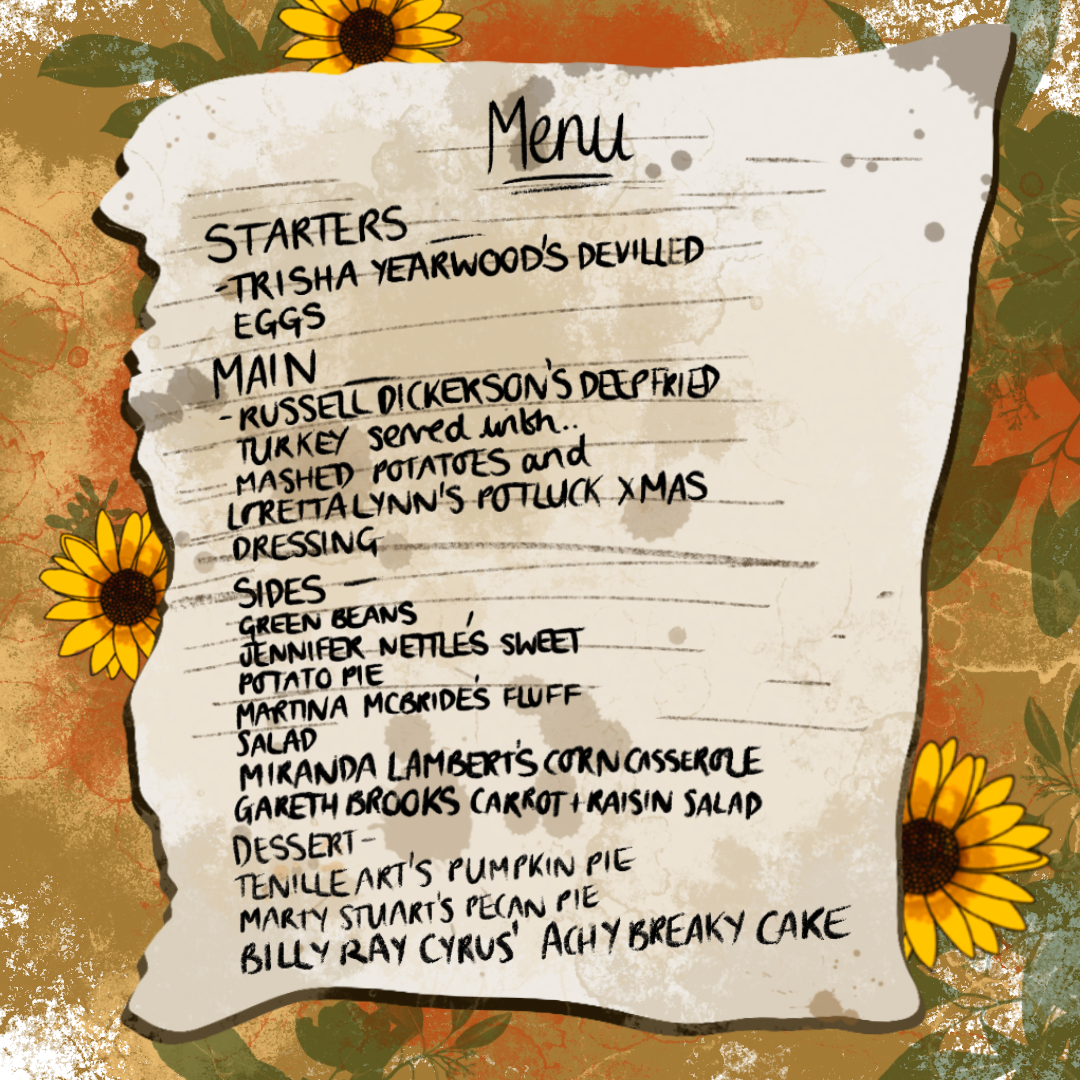 Much to our delight, when we arrived at the Holler offices, we found that Baylen had transformed our everyday workspace into a candlelit Tennessee mountaintop paradise - albeit one that looked out over an East London construction site - with tastefully placed plastic pumpkins and stars and stripes bunting strung between the office walls. All sorts of delicious smells were wafting in from the staff room, where Baylen had set up his makeshift Tennessee kitchen.

“This is what home smells like”, Baylen told us proudly, hands on his hips in a ‘Trust me I’m a DJ’ apron. “If I close my eyes, this could be my mama’s front porch”. 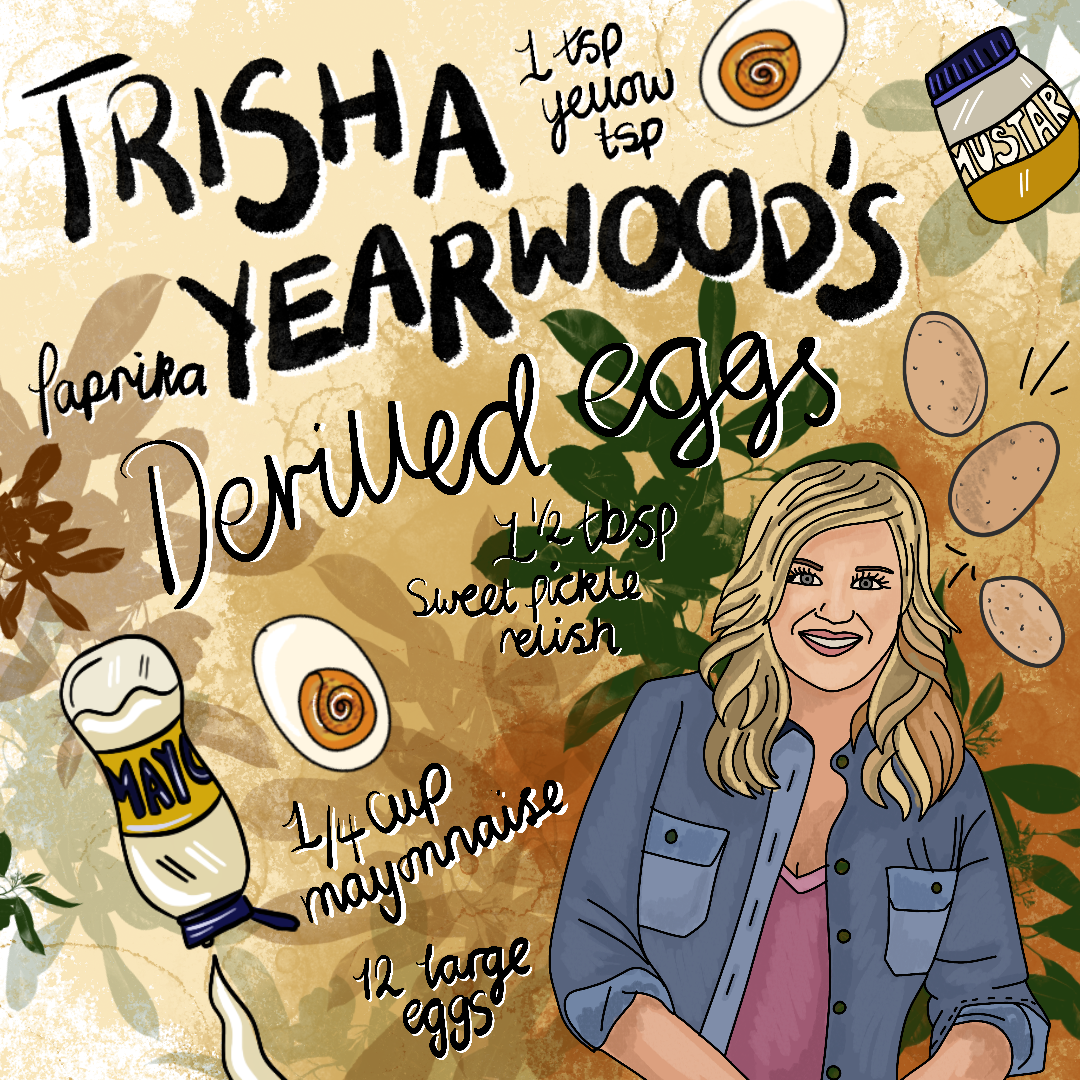 This Deviled Eggs recipe came from none other than the queen of country cooking herself, Trisha Yearwood!

They tasted quite nice, I suppose. From what I could tell, Baylen had just scooped out the middle of an egg, replaced it with a sort of mushed up egg mayonnaise and then sprinkled a bit of paprika on top. It seemed like a lot of bother, to be honest. It was basically just an egg. He could have saved a lot of preparation time by just handing us each a boiled egg when we arrived. Squid Game style. 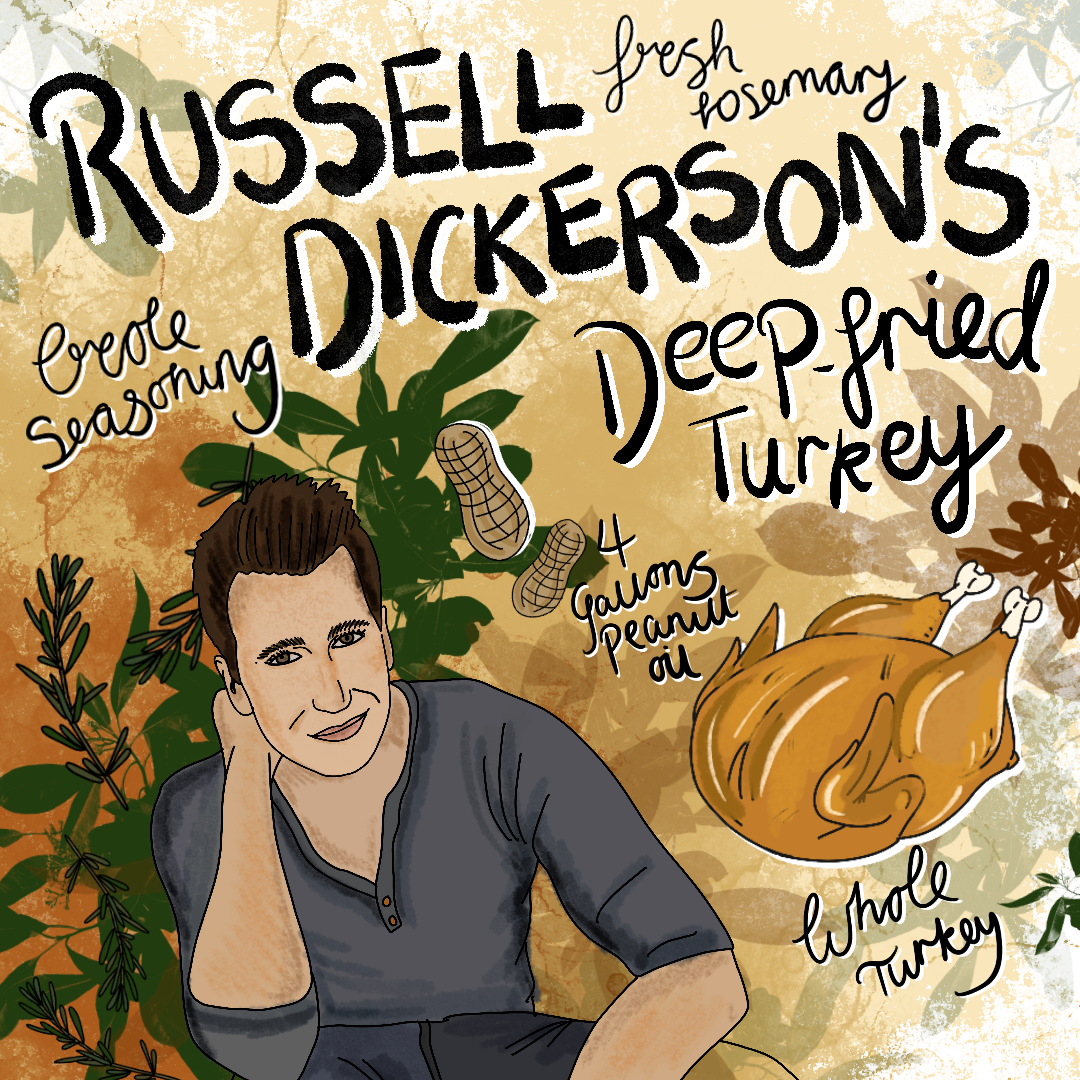 These days in country music, the only thing more contentious than Jason Aldean is: what exactly is the best way to cook a turkey? You can do it the Martina McBride way (dry brined and roasted), the Kimberly Schlapman way (injected with peach sauce), or even the Blake Shelton way (cooked in crusted Flaming Hot Cheetos and Funyuns).

For their first Thanksgiving together, Garth Brooks was so disbelieving of Trisha Yearwood’s recipe for no-baste no-bother turkey, that he insisted his wife cook a "stunt" turkey as a test, and it’s an issue that continues to divide the country music community every Thanksgiving.

Baylen went completely crazy for his turkey this year and decided to cook it the Russell Dickerson way: deep-frying the bird, only stopping short of going full-on Rhett Atkins by not shooting it himself. As he rigged up his homemade propane gas frying station in the stairwell, we began to miss the comfort and relative safety of simple oven cooking, but there’s no doubt that it’s a spectacular way to prepare a Thanksgiving dinner.

With a cooking time of less than an hour, it was a very efficient and effective way of cooking a turkey, although when the flames from the fryer started to catch on the ceiling tiles everyone began to look a little unsettled.

The most surprising part of it all, though, was the side dish from Martin McBride. Fluff Salad?! Er, okay?! 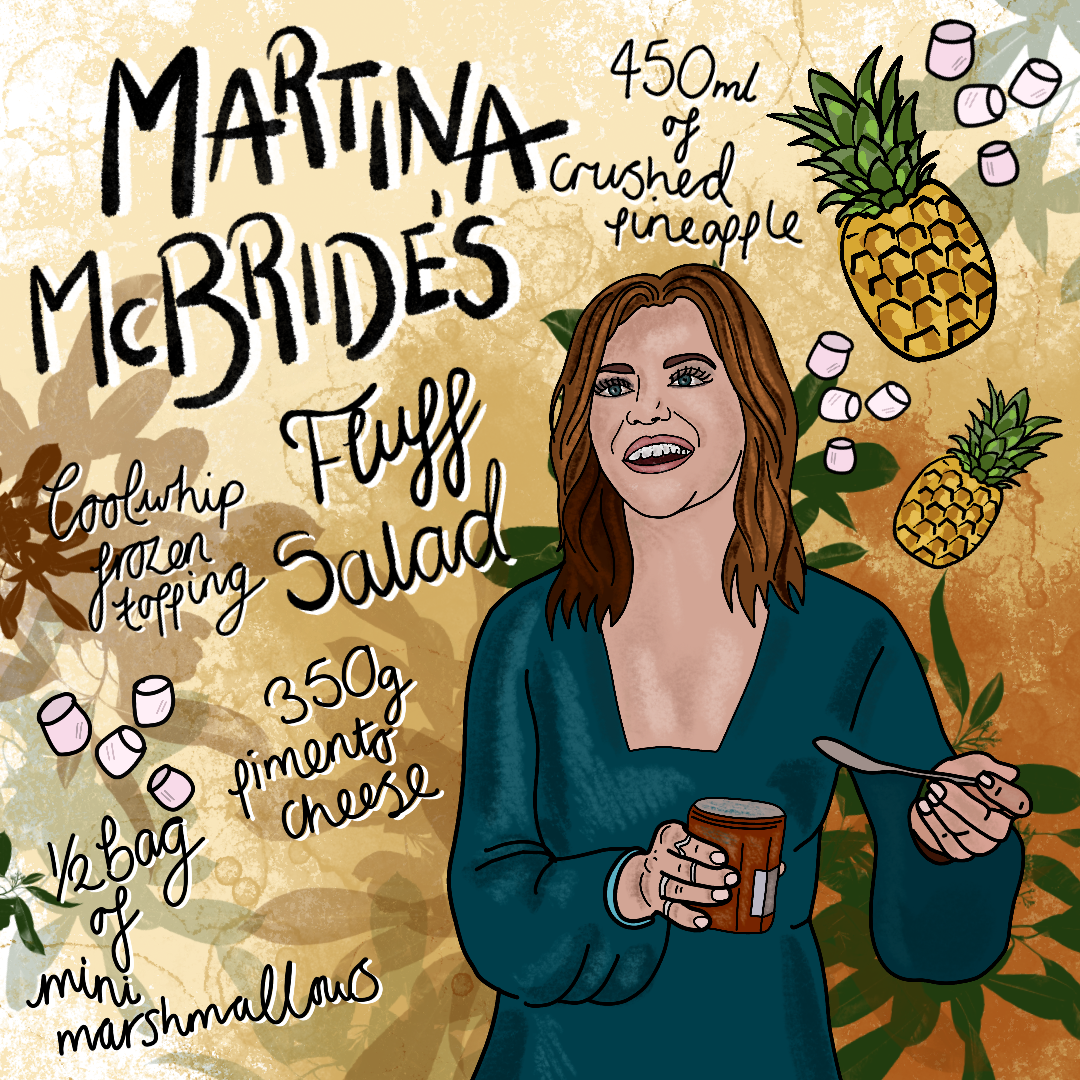 This one was most certainly not just for the girls; it was a unanimous hit with everyone at the party. Who would have thought that cheese, marshmallows and pineapple would make such a delicious side dish?! It was a bit like a dessert, but it also weirdly made sense being part of the main course too.

I found it best not to think too much about it while I was eating, because the mixture of ingredients was too confusing alongside all the savoury dishes. It reminded me of that episode of Friends when Rachel makes a trifle with minced meat in. Perhaps Joey was right: “What’s not to like?”

It made me want to learn more about this mysterious “Cool Whip” too. We don’t have that over here in the UK. Adding that to my Christmas list straight away!

By the time it came to the dessert course, we all wished we’d taken Carrie Underwood’s advice and worn stretchy pants, as Baylen proceeded to bring us out the real showstopper from a 90s country legend. 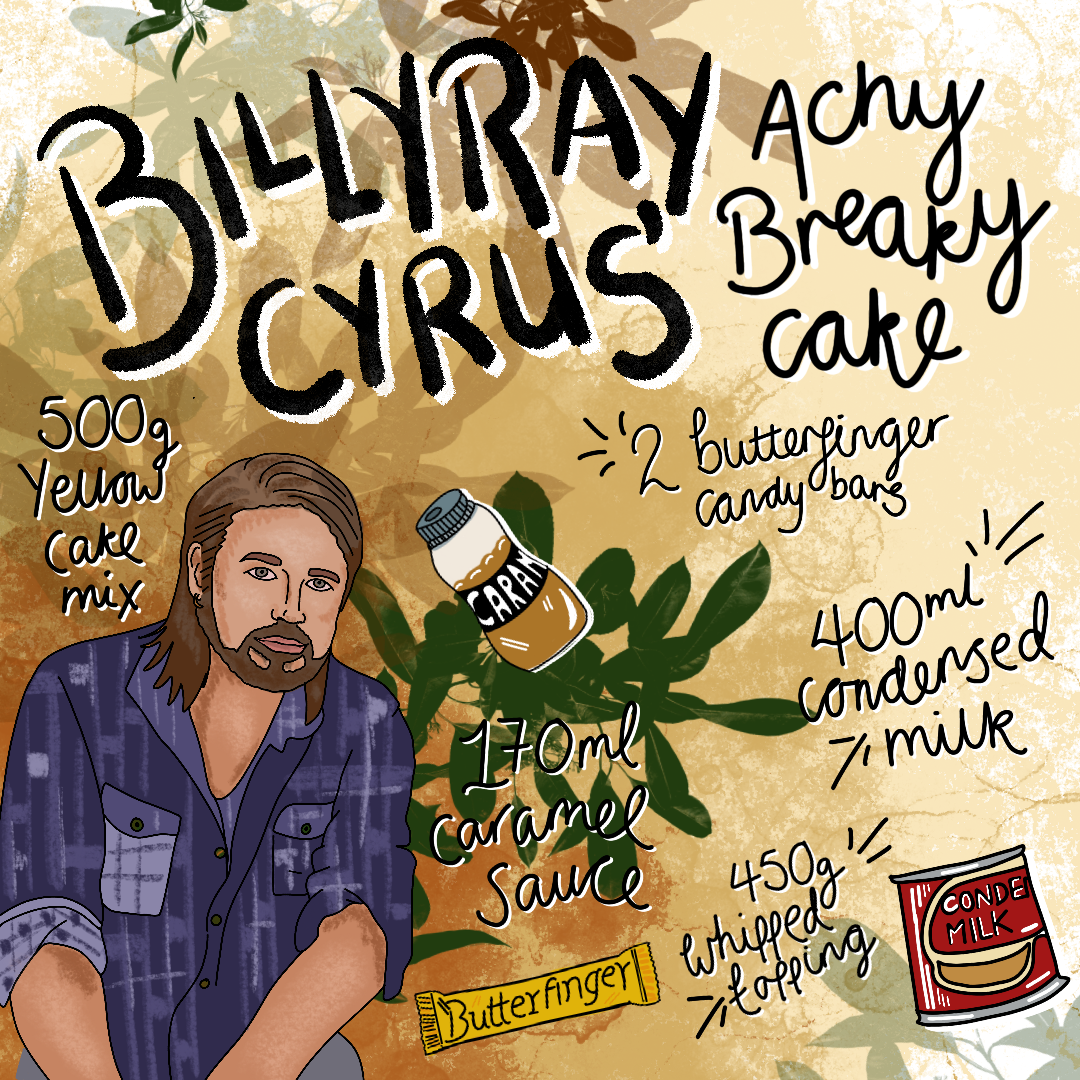 Knowing that this is the sort of food that Miley Cyrus was raised on makes a lot of sense. It’s an ambrosian assault on the taste buds that completely overwhelms you. This really is the food of the country gods! It’s basically a cake with four different toppings and candy bars crunched up all over the top if it.

The end of the night was fast approaching, and as Baylen celebrated by doing the Kelsea Ballerini turkey leg dance, the rest of us loosened our belts and leaned back in our chairs, to look back on the last year of Holler; thankful for all the artists and labels and press teams and everyone involved in everything we do. Everyone that we’d had the pleasure of working with these past 12 months.

Most of all though we were thankful to you, our readers, for taking a chance on us when we started out and sticking with us as we’ve grown. Johnny Cash was absolutely right about Thanksgiving. This is a time when we should all count our blessings, and here at Holler we feel especially blessed to be able to do something we love with so many lovely people.

Happy Thanksgiving to you all.