Holler & Swaller: 10 of the Best Bourbon Cocktails in Downtown Nashville

The Holler & Swaller is THE move you do anytime you’re out drinking in Nashville.

It’s a learned honky-tonk behavior; one that you can literally practise anywhere. If you’re not from the south, here’s how it works: you yeehaw (the holler) when something great happens – a song you love comes on, your best friend walks into the bar, that team did that thing – and then you take a big swig (the swaller) of whatever drink's in front of you.

While it’s best done with a beer, for this list, we went all bourbon. Tennessee is neighbors with Kentucky, where most of the world’s best bourbons are made, so it just felt right to roam all over Nashville in search of the finest cocktails made from the good stuff – no unicorns included, sorry Pappy Van Winkle lovers - to the bottom-shelf bottles.

It always feels right to raise a glass and give a hearty cheers to the people who come up with the names for these drinks, the bartenders who mix them, and the bourbon distillers who painstakingly turn corn into bourbon and then age it all in charred oak barrels for decades. This list does just that. 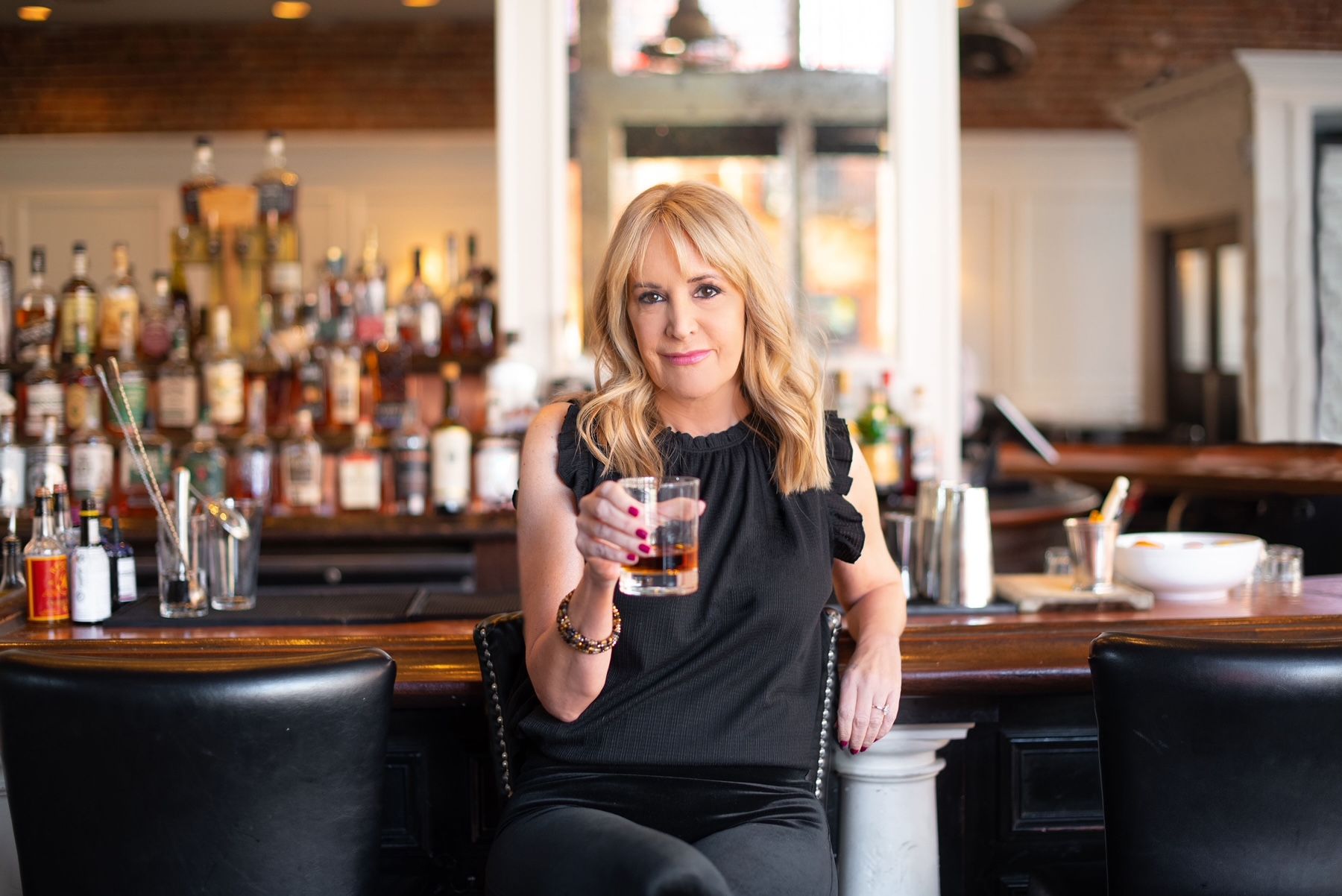 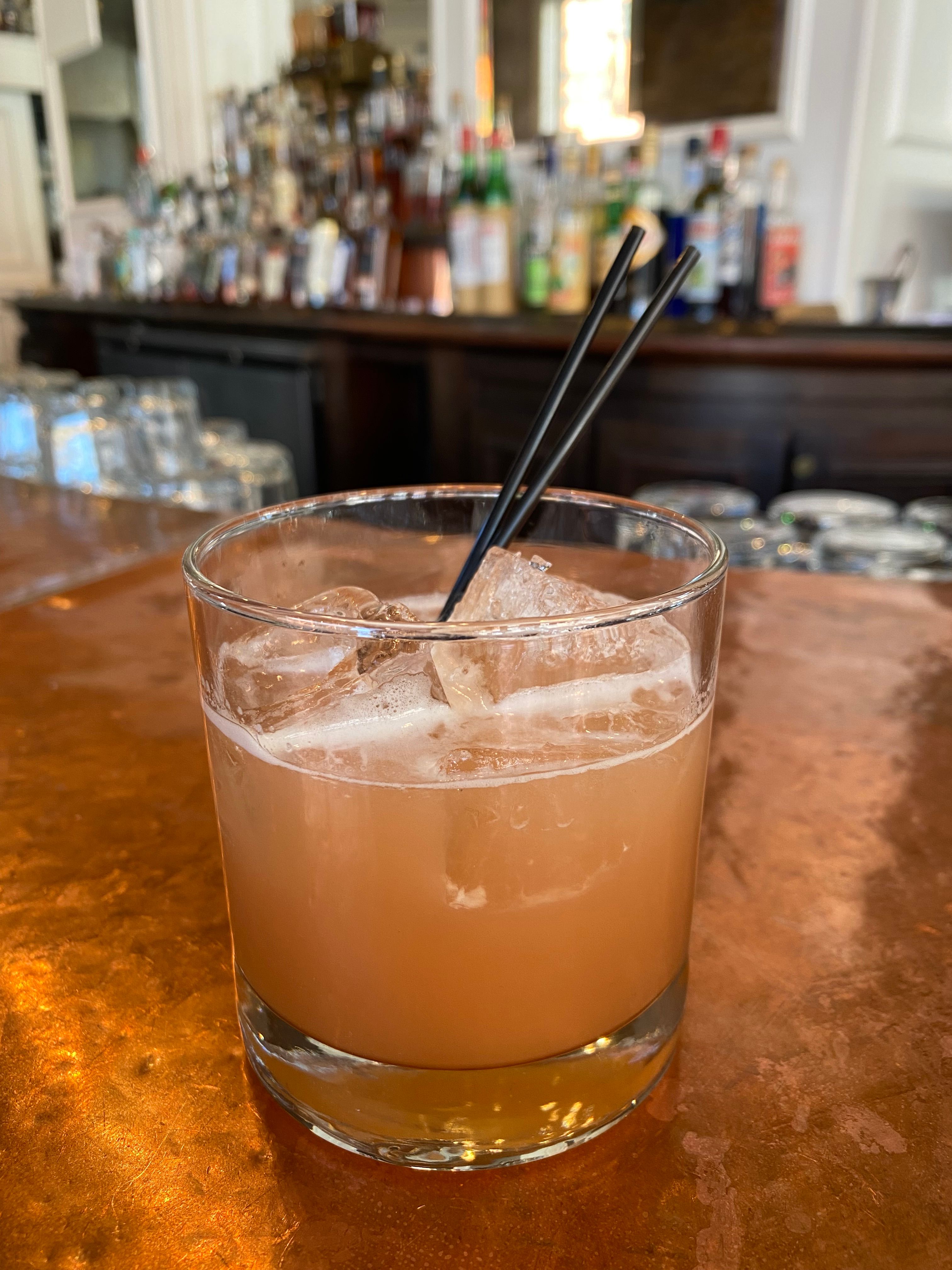 This heavenly bourbon cocktail isn’t a quick pour. It’s one that put the bartender to work like a chef in an upscale restaurant. The main ingredients are shaken vigorously, and then strained and poured over ice. The result almost tastes like a refreshingly light fruit punch, or like if bourbon Palomas were a thing.

Don’t let the mix of scotch and absinthe scare you either - this drink only has a literal spray of each. It's like a boozy spritz of perfume, so there’s no chance you will hallucinate or head straight into delirium like the absinthe bans in the 19th century would have you believe. 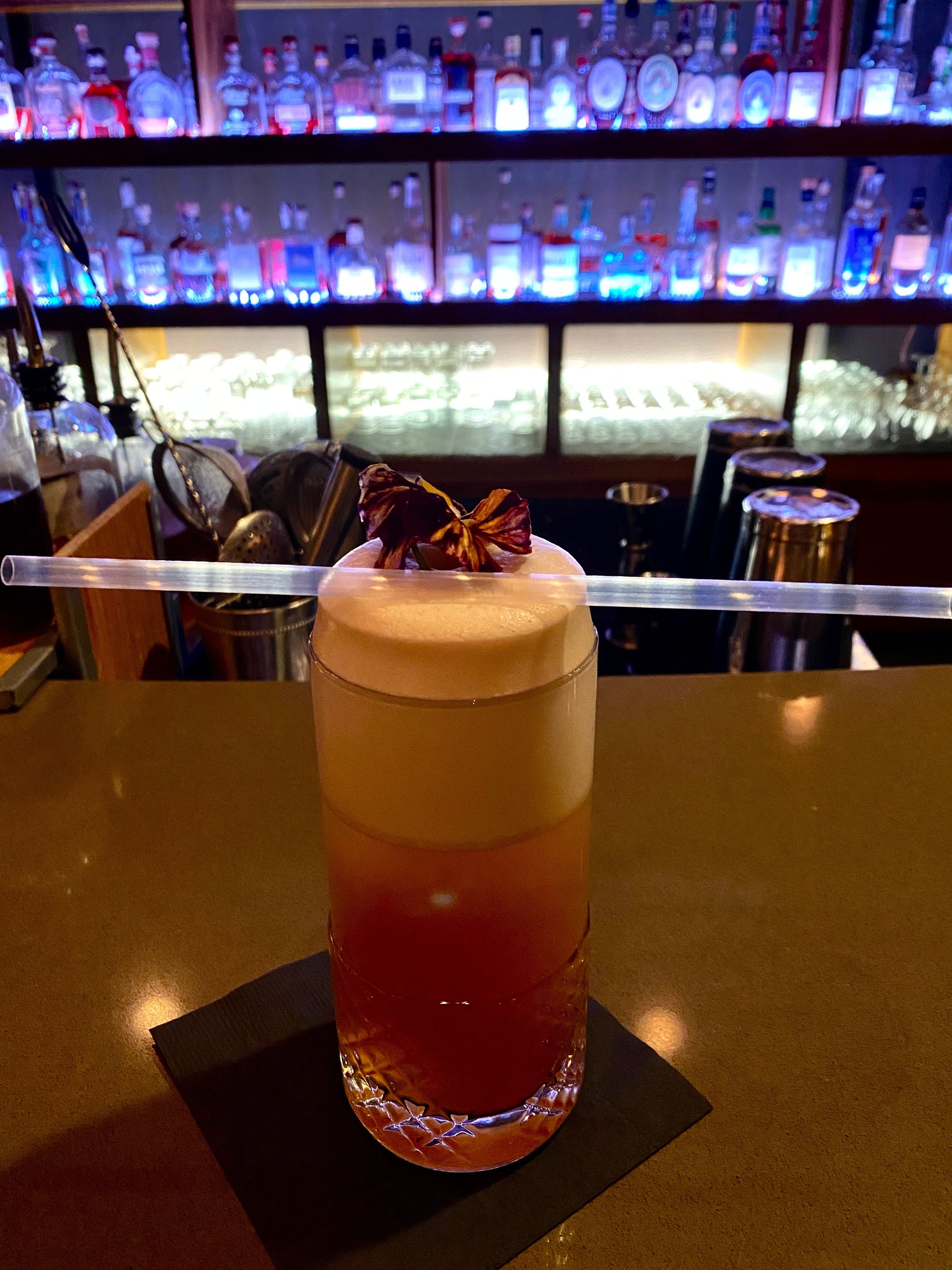 The Earth Crosser at Sinema

Before we dissect the drink, let’s dissect the bourbon itself. This is a charcoal-filtered, small-batch bourbon - hand-crafted exclusively for cocktails that are the above-average sort. Like this one.

Since this drink takes a while to make, patience is a virtue here. There are so many steps: the measuring, the pouring, the dry shake, the wet shake, the egg foaming and then the settling. Once it’s ready, and you get past the idea that you are drinking egg whites, it tastes almost like a bourbon milkshake.

Not too sweet, and yet not watered down; this one is not served on the rocks. 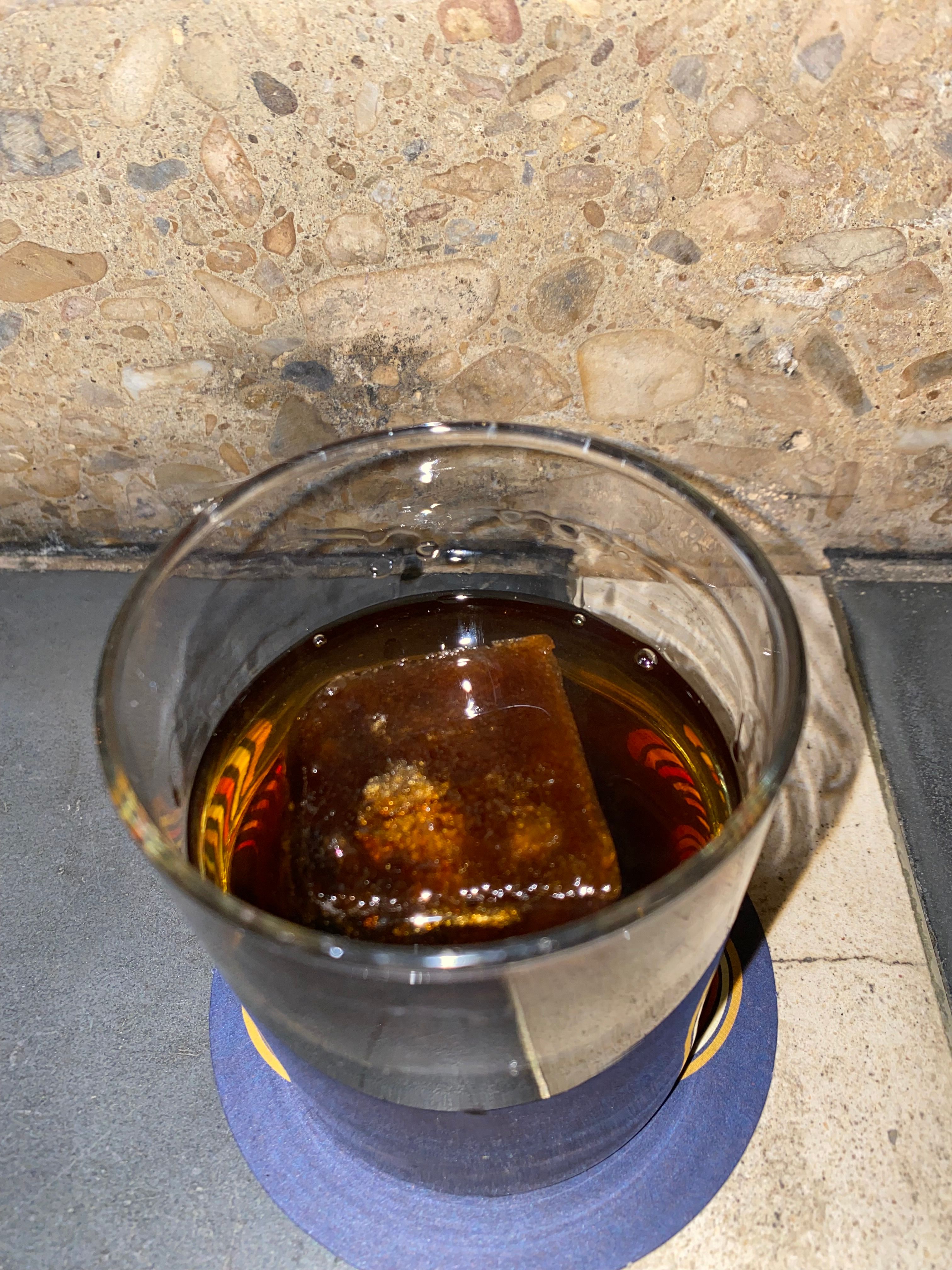 It takes forever to drink this drink, and with every sip, it becomes a totally different drink.

What is initially very strong bourbon over a very strong coffee cube eventually turns into something brand new, as the bourbon melts the solitary ice cube.

The combination of a depressant with a stimulant may not be for everyone, but it definitely keeps your sobriety intact. If it was socially acceptable to have bourbon for breakfast, this would fit the bill.

The bar itself is set in a historic boiler room, beneath other Edgehill-area restaurants, adding to the illicit speakeasy atmosphere. 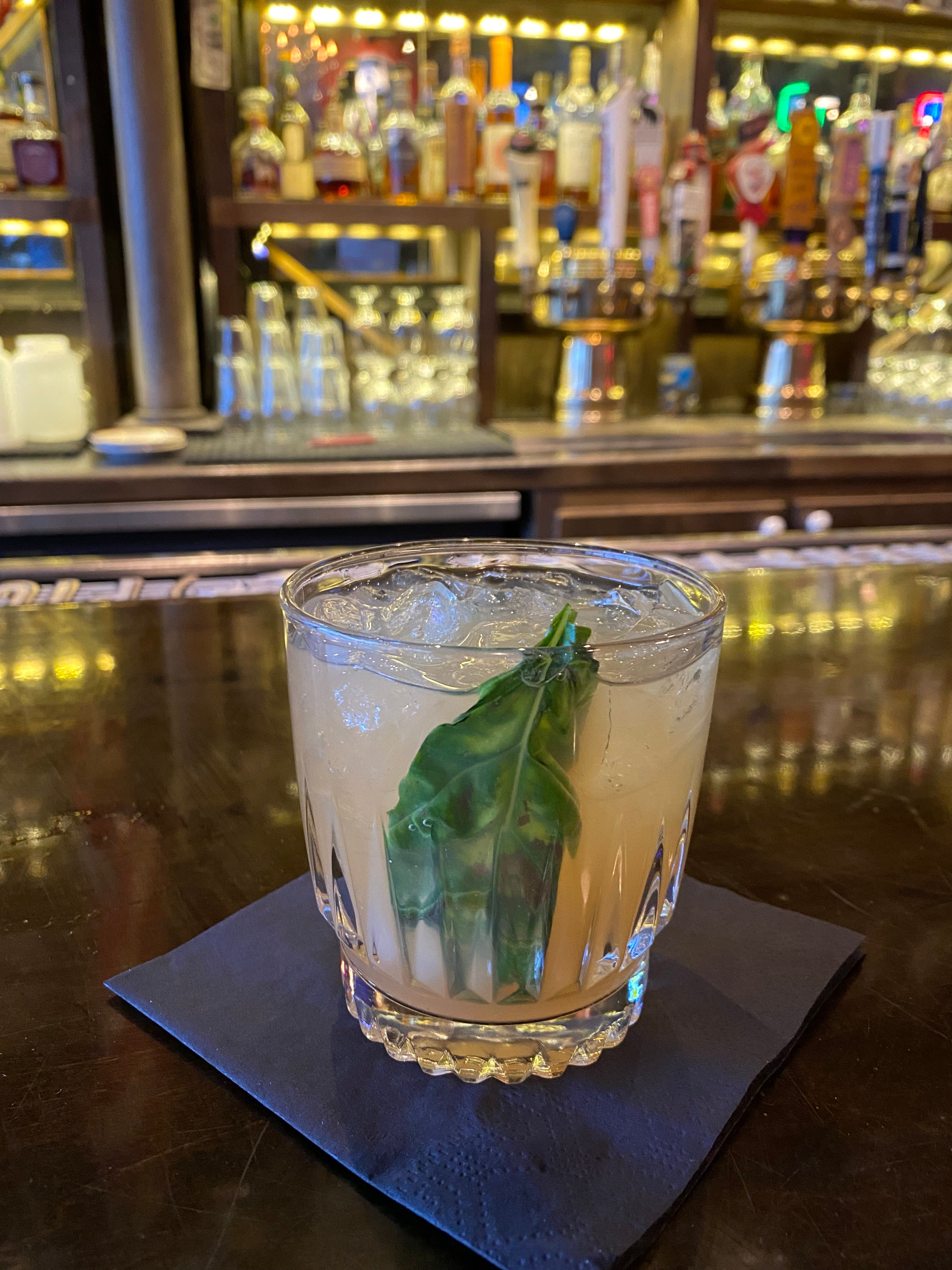 The Gambler at The Sutler Saloon

The Gambler at The Sutler Saloon

At Sinema, the bartender insists that whiskey isn’t meant to be shaken - only a stir will do.

He might have to agree to disagree with the bartender at The Sutler, because this cocktail was perfectly pleasant.

The lemon is fresh, so it almost tastes like you’re sipping on an unsweetened lemonade. But the basil syrup – proudly made in-house – gives the whole thing enough sweetness to take away the tart of the lemon.

The bourbon does get a little bit lost in the shuffle, which makes this a good entry-level drink for anyone who wants to try Blanton’s but is too reluctant to order it straight up. 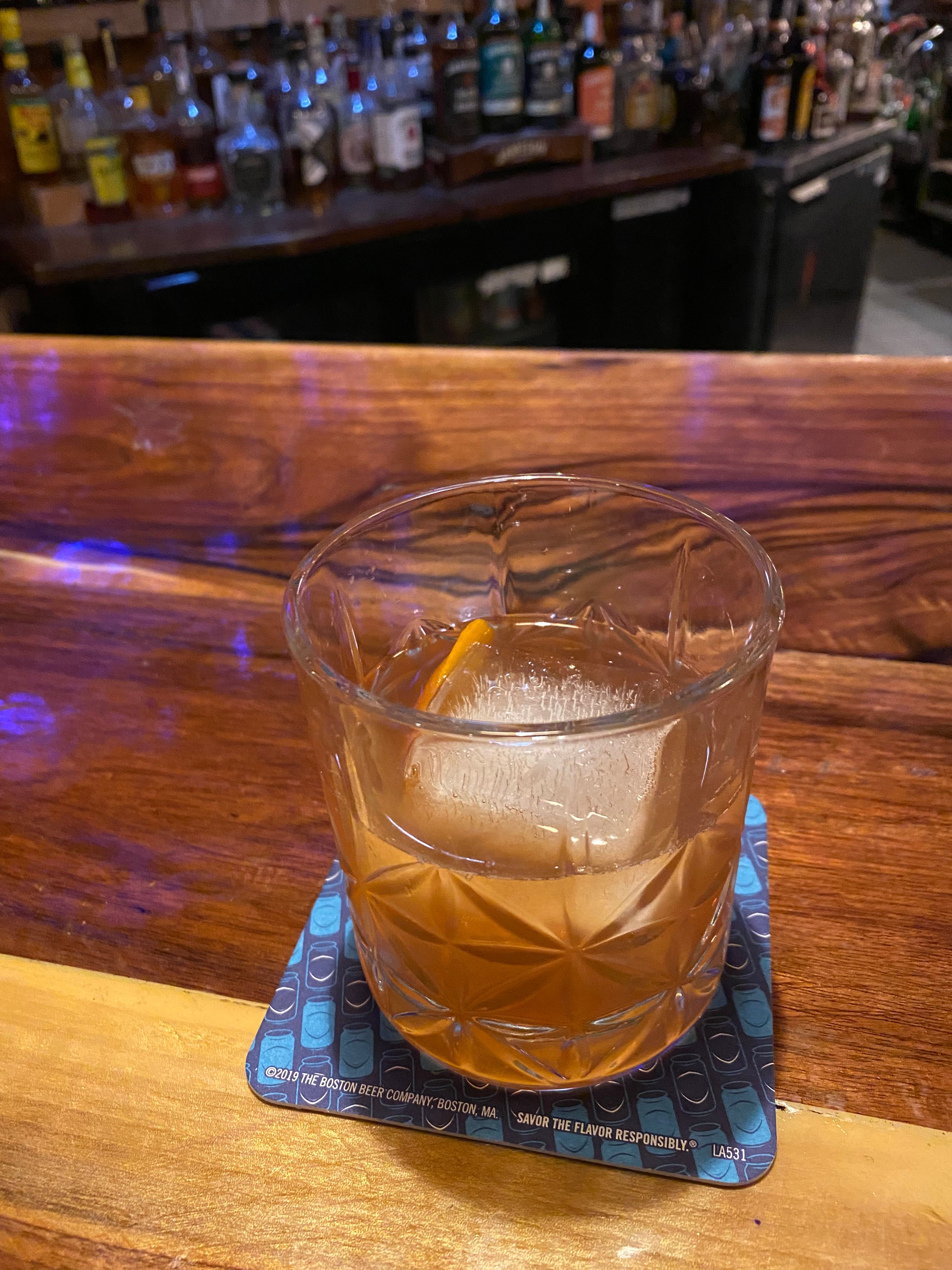 The Frostbite at Embers

This is everything bourbon enthusiasts love about bourbon: a mixed drink that tastes like the bourbon itself.

Velvet smooth, rich, sweet, caramelly and cinnamon-ish. Even with the long list of ingredients, nothing stands in the way of you and the bourbon. The Allspice Dram gives this craft cocktail a hot-toddy kind of flavor, just without the heat. 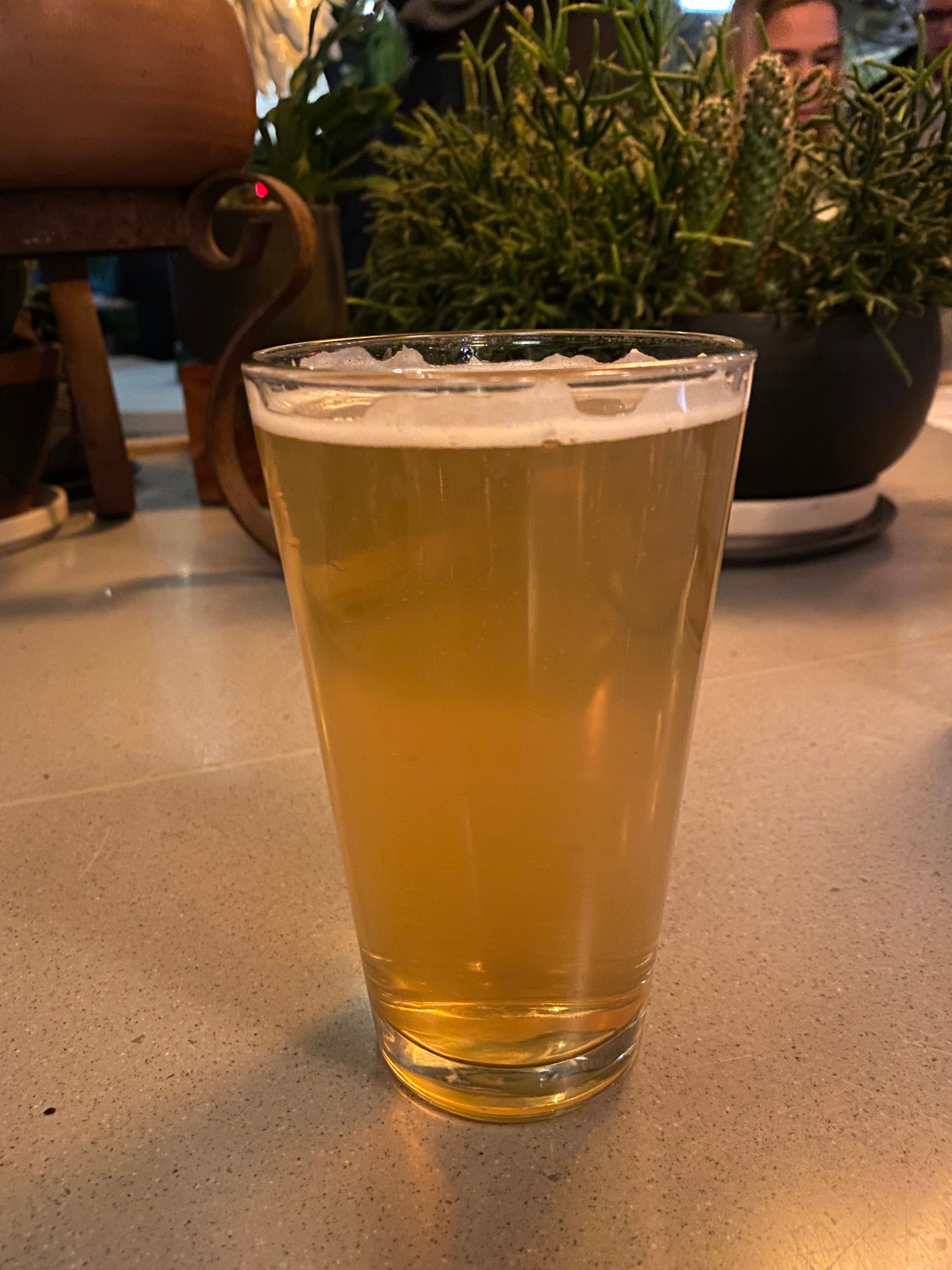 Nashville 75 at the GreenHouse Bar

This is basically a full glass of bourbon and beer. Beer’s not your typical mixer for the brown water, so it stands to reason that this drink is anything but typical. If anything, it was like a beer but better.

The honey and zesty lemon work well together, giving this tall glass some real character. You can’t truly suss out the taste of the Nashville-made bourbon, but you know it’s there because you watched the bartender make it. 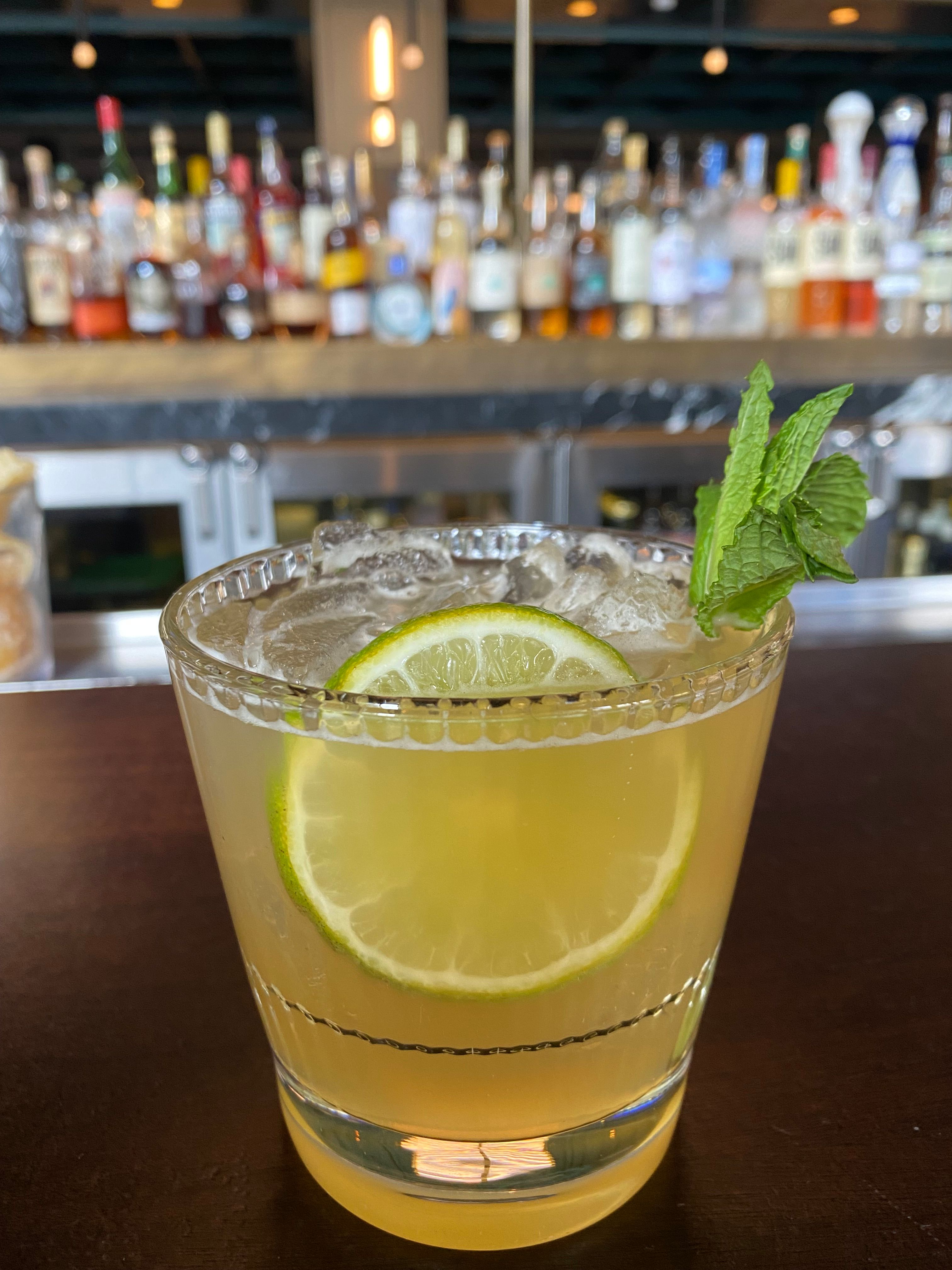 The unexpected ginger soda in this drink is the absolute deal maker.

It’s not at all like the spicy ginger beer you’d find in a run-of-the-mill Moscow Mule. This soda is made in house with agave syrup, so it almost makes the bourbon even sweeter. The spring of mint? It’s just a little zhuzh - like an accessory for the glass. You don’t have to stomach that overwhelming mojito flavor in this particular mélange. 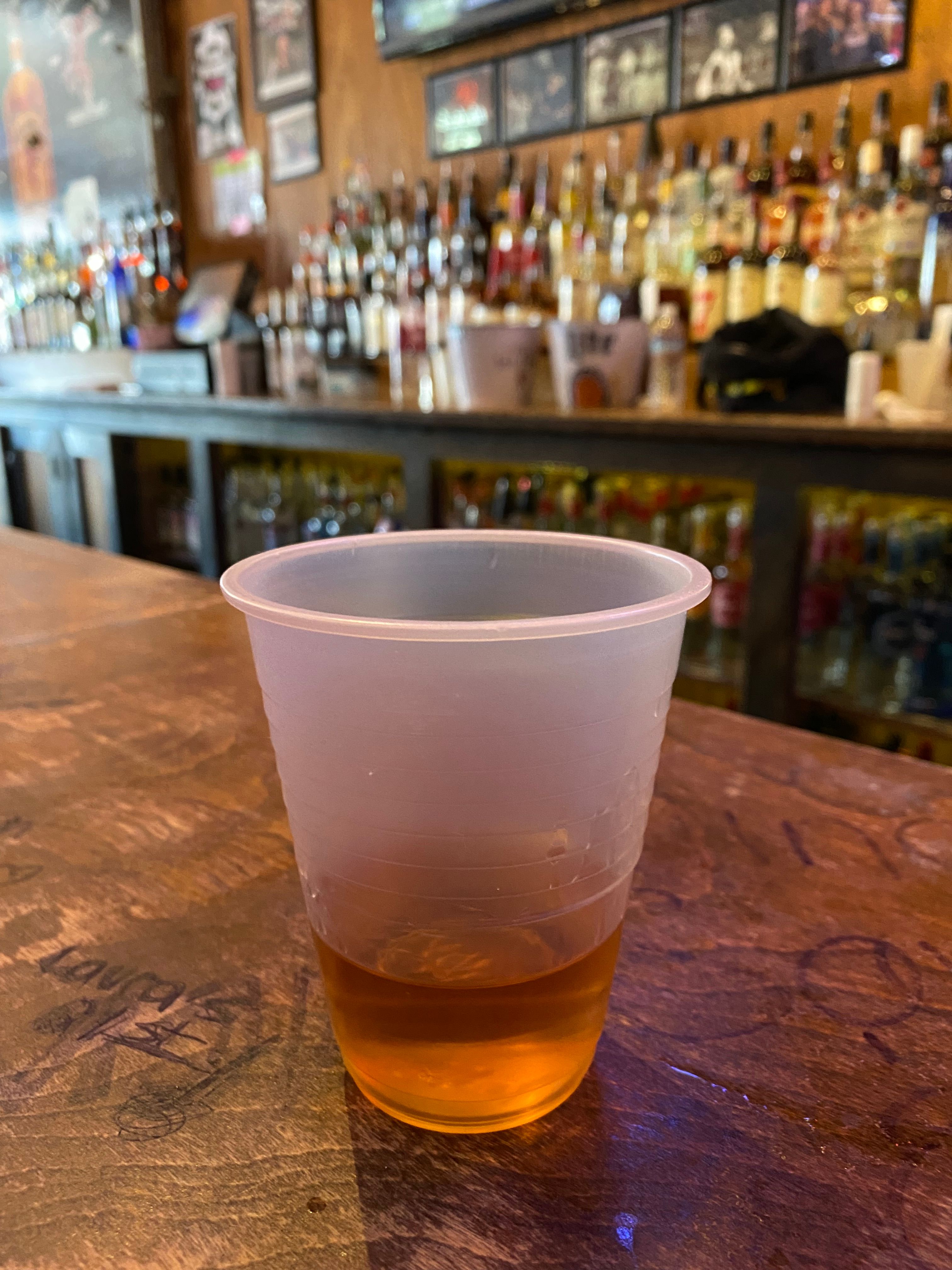 No ice, no mixers, no twists, no salted rims and nothing muddled.

Just Jim Beam in a glass. Or in this case, a plastic cup.

Tootsies is an established and raucous honky-tonk on Nashville’s famed Lower Broad, so it is no place for glass. In a way, asking the bartender for a “Jim Beam, neat” is just a grown-up way of asking for a shot, but one that you will sip slowly instead of throwing back.

Sometimes the simplest drinks can suit all of your holler and swaller needs (Fun Fact: Tootsies has sections for both on their drinks menu). At first glance, this drink resembled some kind of dark martini. But with the first sip, you know exactly what it is: bourbon, but better.

This place knows how to make a proper brown water cocktail, because they make them all in batches in-house before they open their doors. So, whatever the mixologist is doing in advance, it’s done well.

The bartender pours the blend over ice, stirs, then strains it into a glass with an apple slice garnish. By the time it’s gone, it feels like you just finished a boozy caramel apple.

It’s named for the popular Tennessee hiking trail in the South Cumberland State Park, the cocktail an apt celebratory reward after completing the 12-mile journey. 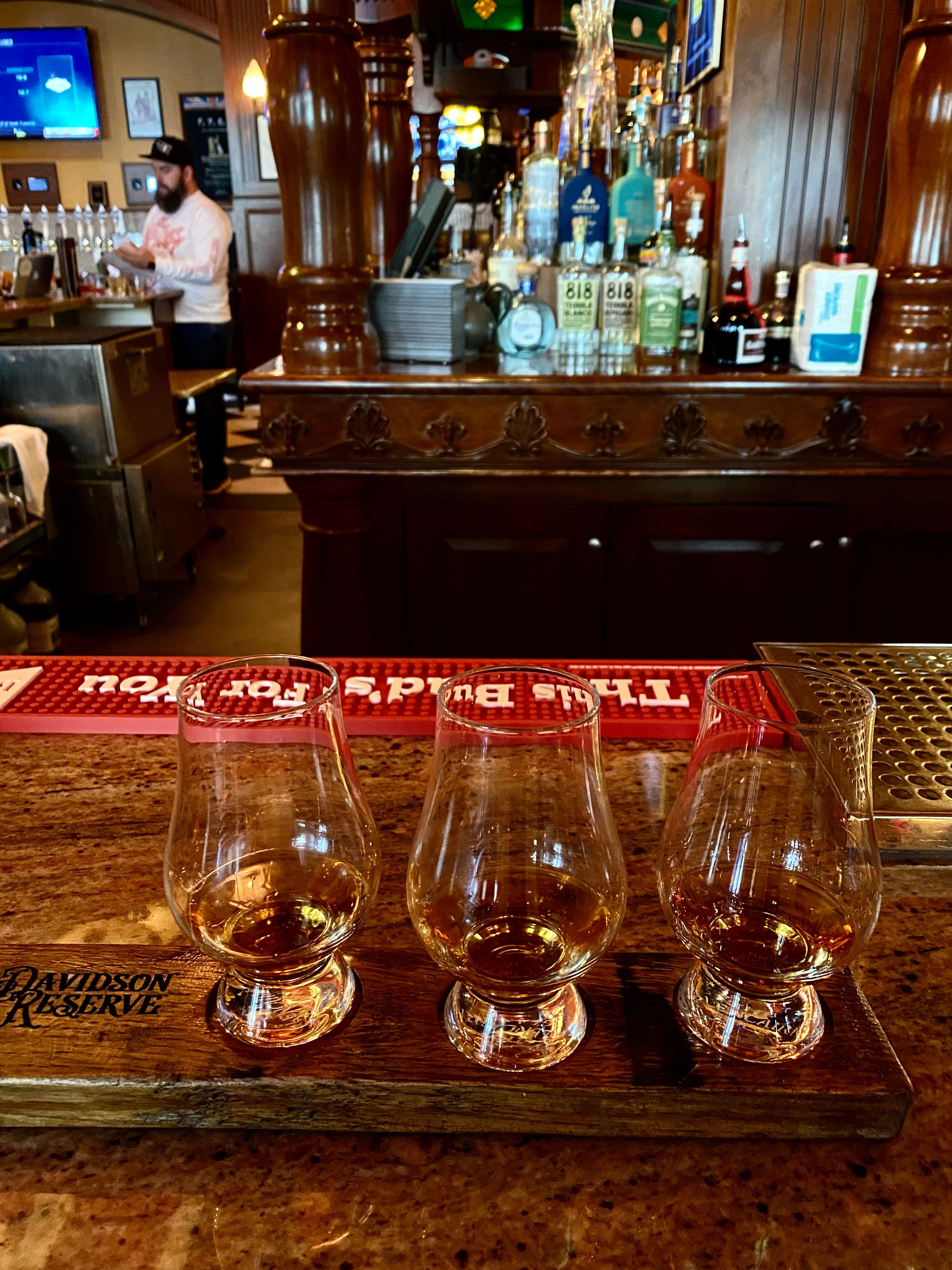 Comfortably Numb at The Pub

Comfortably Numb at The Pub

This flight of three half-ounce pours (with no mixer) is one of the easiest ways for a new bourbon drinker to find out which kind is their favorite.

It is also the best way to prove to your palate that top-shelf names do not, in fact, all taste the same. These baby pours are just enough to discover that Blanton’s tastes like toffee and pecans, that Eagle Rare has more of a vanilla and spice finish, and that Four Roses earned its perennial appeal with a butterscotch flavor - full of sweet nostalgia.

Alison's new book - Backstaged: My 15 Years Behind the Scenes in Country Music - is out now via Gatekeeper Press. You can purchase a copy from one of Holler's selected partners below: 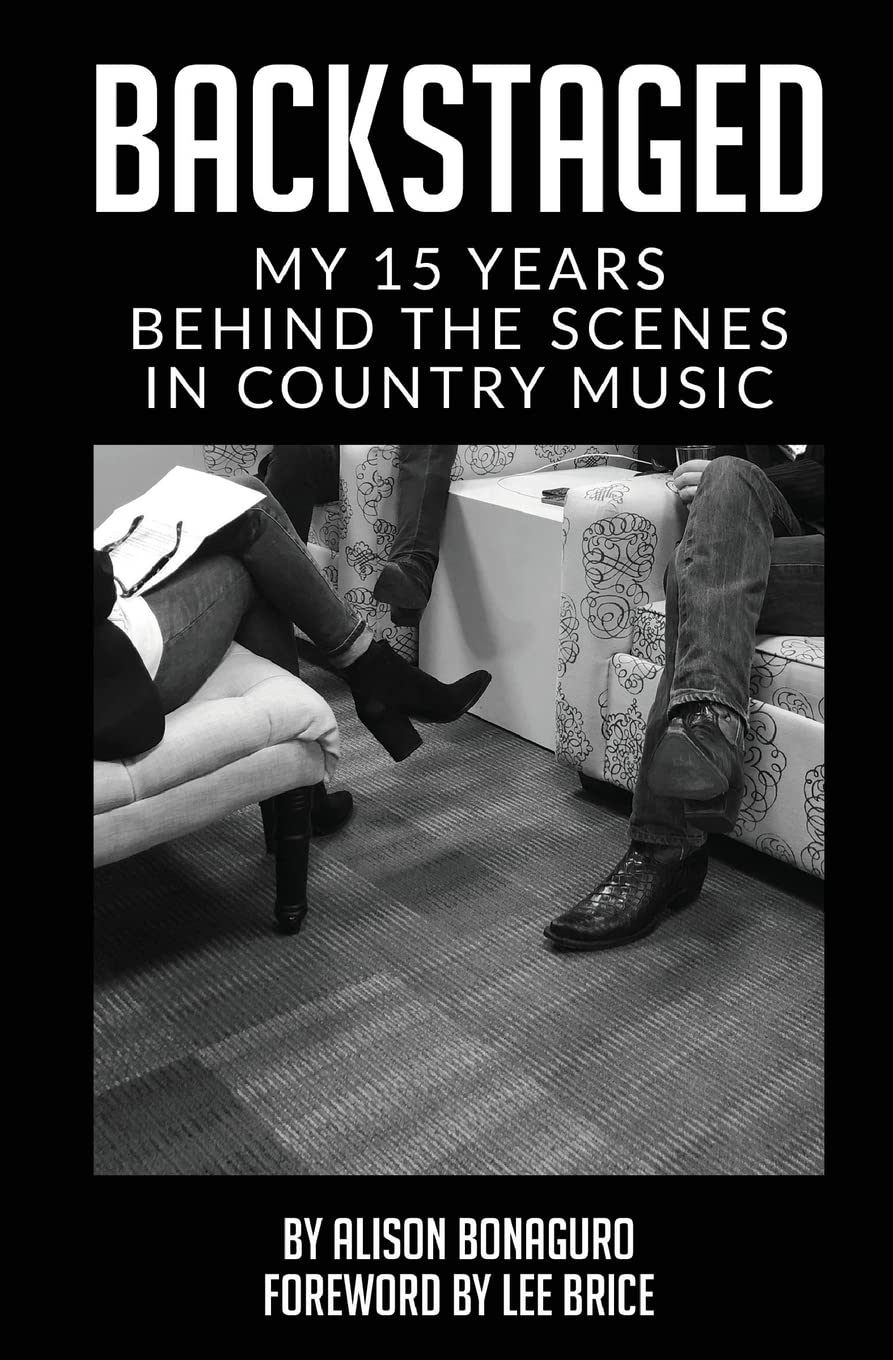