Lydia and Laura Rogers of The Secret Sisters have loved Brandi Carlile since they were teenagers. That admiration started out as fandom: they first got introduced to Carlile’s music by their aunt, when Lydia was still in high school and Laura was in college. Both sisters dove deep into Carlile’s music, spending hours trawling YouTube for rare performance footage and even standing in line to meet her for a picture and autograph.

The Secret Sisters’ relationship with Carlile continued to evolve. She has been, by turns, their tourmate, mentor, peer and friend. Carlile believed in their music at a time when the pair were having trouble believing in it themselves. After two albums, the duo lost their record deal and faced bankruptcy, and their enthusiasm for a career in music started flagging. It was then that Carlile and her bandmates, Tim and Phil Hanseroth, stepped in, signing on to produce the Secret Sisters’ breakout third record, You Don’t Own Me, as well as their most recent album, Saturn Return.

Below, the Secret Sisters talk about their relationship with Carlile and why she’s their musical hero. 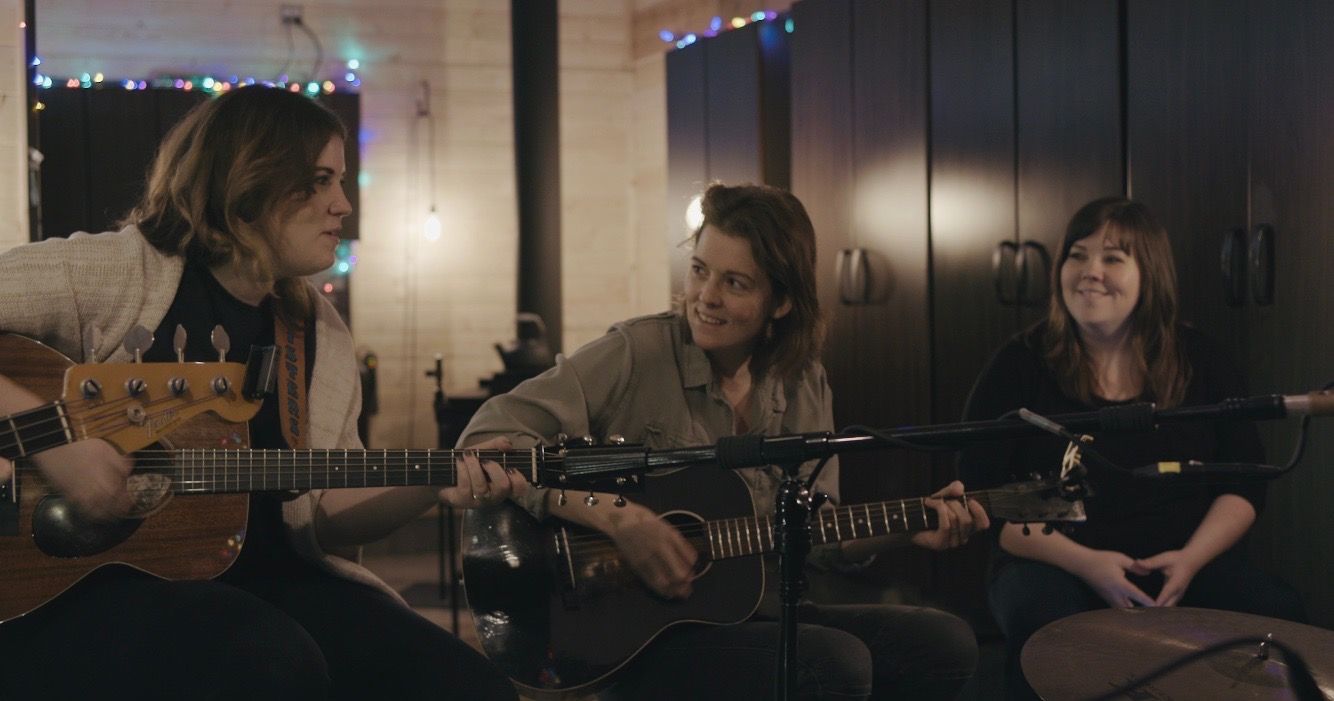 You’ve both been fans of Brandi Carlile for a really long time. What was it like when you finally met her? Were you starstruck?

Lydia: Well, back in the day, she would come out after the show and there would be this long line of people waiting to talk to her. So that was where we first encountered her, as fans and concertgoers. And we have photographic proof of how incredibly star-struck we were! But when we met her on the road [while we were touring with her], we were even more star-struck, because it just felt like an out-of-body experience, like it wasn’t even happening to us. She’s just so normal, and kind of became this older sister figure, especially on the road, who made us feel like we semi-knew what we were doing.

Tell me about the first time you “met met” her -- when you were hanging out as peers.

Laura: The very first night we met Brandi it was her 30th birthday, and she took us out with all of her really cool friends after a show. We ate at this really fancy restaurant. We don’t eat at fancy restaurants! We sat at the table, and she made us try oysters, which are still disgusting. And she made us try to learn to yodel in the middle of the restaurant, on her 30th birthday. I feel like that is completely the image of what Brandi did to The Secret Sisters.

What was your first impression of her?

Laura: I just immediately felt super included. That’s what’s so beautiful about Brandi. Even in spite of all of her success over recent years, I still see that inclusivity of wanting everyone to feel like they matter, that what they have to say is important. I’ve even noticed how graceful she is about having interactions with people who are in opposition to her. I think it’s beautiful to be able to interact with people of all backgrounds and make them feel like what they have to say really matters, even if you don’t agree at the end of the conversation. That inclusivity is super rare.

Lydia: From what I understand, she felt very excluded when she was in high school. You know, she had identity issues, and really struggled to feel like she belonged. So I think that she...not even over-compensates, but almost overcompensates, to make sure everybody feels like they belong there.

Laura: Our first real official studio moment with Brandi was when we made our third record. I just remember the enthusiasm. At that point, we didn’t really even think we were gonna make another record to release to the world. We would be singing and thinking, “Oh, this isn’t right,” or, “Maybe that didn’t sound so convicted,” and Brandi would be in the control booth, just fist-pumping and jumping up and down.

Lydia: Like we had just done the best vocal take of our lives! How did your relationship evolve between making You Don’t Own Me and Saturn Return?

Lydia: We were a little bit more confident with this record cycle to speak our minds. We felt more like we were producers as well, that we could say more. And Brandi and the Hanseroths always wanted us to feel like this was truly our record. They were like that on the third record too, but we were so new to having them as producers, and still a little bit in awe of the fact that they were willing to do this. With this record cycle, it was just a much more comfortable process, also because it was done in her house at her home studio.

Laura: It was a very relaxed party.

Lydia: So relaxed. Though Laura was in her first trimester of pregnancy, so she probably doesn’t remember much.

Laura: Ugh, I vomited in Brandi’s house so much.

That’s one way to bond!

Laura: It’s so true. Poor Brandi is probably way more bonded to us than she ever wanted to be.

Lydia: Yeah, and I did the neti pot over her kitchen sink! I think she gets a kick out of us doing things outside our comfort zone that scare us. Because we were, and still kind of are, these timid Southern girls who come from conservative Christian backgrounds, but she pushes us. I would have never shown my snot to someone until Brandi forced me to do that because she’s the most persuasive person in the world. But that’s what makes her great.

She’s so good at making you feel at ease and letting you be who you are, and embracing that.

What’s something you wish more people knew about her?

Laura: Everything just smells really good at her house. If it doesn’t smell like a wood stove, then it smells like really nice incense. And if it doesn’t smell like incense, then it’s some amazing meal she’s cooking on the grill on her beautiful porch. She’s just really good at creating this comforting, cozy space. That’s just who she is - whether she’s onstage performing for her fans or she’s inviting you to her house to work on a record. She’s so good at making you feel at ease and letting you be who you are, and embracing that.

Has she made you think about becoming mentors to younger artists yourselves, down the line?

Lydia: I think what’s hard about the music industry is that so much of it is selfishly motivated. That’s not a bad thing. It’s a business, and we all have to keep the lights on. We’re all worth something monetarily, if you wanna put it that way. But with us, there were so many things that Brandi deserved much more financial compensation for than she knew she was ever gonna get. To me, that has shown a true interest in us as humans, as artists, as women, as mothers. You know, her intentions are just really honourable. It’s never been about, “Oh, I can line my pockets with this great opportunity.” So I think because we’ve experienced that with her, it makes us feel really compelled to pay it forward. Whatever we can offer to repay the good karma that we’ve gotten -- we’d be ashamed not to. It would be selfish to not try and pass that torch, move the ball forward for somebody else.