She is one of the biggest superstars in country music, but Martina McBride could easily be your nextdoor neighbor.

“I’m just getting started this morning…” she laughs, as she pulls up a chair in her beautifully decorated living room. A wooden chandelier peeks over her shoulder near the exposed beams in the ceiling. The room is warm and inviting; the perfect setting for a killer dinner party, something McBride is famous for throwing.

She’s also known for her incredible voice. It’s one of the most recognizable in country music – having sold 23 million albums sold to date over her 30-year career.

It’s safe to say Martina is a force. For a small-town girl from Kansas, her ride in the music business has been extreme. Her music has shaped conversations around topics that are not easy to talk about; child abuse, poverty and domestic violence are all topics of some of her biggest hits. While she says everything was intentional, it wasn’t necessarily by design.

Her music helped define what a female country star could do with their platform, before we even knew what a “platform” was. Simply put, she helped shape the landscape of country music in the 90s and beyond.

Martina had barely unpacked her bags from Blake Shelton’s Friends and Heroes tour when we sat down to talk, without even considering that she was also in rehearsal for her forthcoming holiday shows.

“It's a pretty intense Fall. We fit around 48 dates in between June and December. Between the Blake tour and my holiday tour, we have a couple of weeks where we do rehearsals. We get a little bit of a break, but not much; we’ve just been full speed ahead since July”.

The Friends and Heroes tour with Blake found Martina out on the road with Tracey Byrd, Trace Adkins and Lindsay Ell. It was a tour that allowed fans to wax nostalgic about their country music heroes from the 90s and 00s, while also listening to new music in the mix. This was the first time Martina toured on a ticket like this; she even herself admits that she didn’t know what to expect of the tour, but knew it would be great because of Blake.

“That was the first time that we'd really done anything like that. He (Blake) just put together this amazing show. All of the comments that I see from fans have been like, 'That's the best show I've ever been to'. It's just so entertaining and funny, of course he's so funny. It’s very heartfelt and it was a blast”.

It also allowed Martina to return to these aforementioned hits in her catalogue that were so unique to the time. ‘Broken Wing’ and ‘Independence Day’ detailed abusive relationships, the pain of the victims and how they escaped, while ‘Concrete Angel’ faces child abuse. These songs are not what you’d consider top 40 country radio material, even today. For Martina, she didn’t seek them out; they simply found their way to her.

“I never really set out to record a particular message or anything like that. Songs like ‘Independence Day’ just moved me, I feel like they were sent to me for a reason” McBride explains.

“It’s like I was meant to be that conduit, so those songs flowed through to the world. I heard ‘Independence Day’ and thought that it was so well-written that somebody out there needed to hear it".

“It felt like it was going to make a difference in somebody's life, so that was the motivation behind all of those songs”

Surprisingly, she never had any push-back from her record label about those songs. Martina credits Joe Galante, the former head of RCA Records, for never trying to steer her away from the tough subjects.

In the days when radio was the only way to build a career in the industry, cutting these songs was a gamble for both the label and Martina.

“As I look back on it now, I think that I got away with a lot,” she explains. "It was a bit of a fight to get ‘Independence Day’ played on the radio. I just always felt such conviction and such passion for the songs that I chose to record, so I was able to stand up for them and defend them. I never really got a lot of hostility from anybody on the executive side about the music that I made, which was great”.

A strong female singing fiercely about getting away from an abusive relationship left a mark on both country radio and on fans that heard it. It also left a mark on Martina. Much like an actor stepping onto a stage in character, these songs changed her in ways she didn’t expect. She admits the essence of the songs did much more than simply make her famous.

“That was just such a life changing moment for me personally, as well as career-wise obviously. I started getting letters from women who were really thanking me for the song".

You start to think “Wow, this music is powerful”. What I'm doing here isn’t brain surgery, but it does make a difference to people”.

Those career defining songs are now available on her Greatest Hits: The RCA Years double album. It was also just released on vinyl, something that was important to Martina. The nostalgia of having that tangible record in your hand, looking at the album art and listening to the pop and hiss of the record is something she missed out on.

“I have a record player in my kitchen. It’s what I grew up with and it's the music I know. I remember saving money and going down to the local Ben Franklin title, looking in the tiny little record section and just flipping through and waiting for the new Eagles record to come out.

I’d go in there with my own money, take it home and just consume it. It’s a whole ritual. By the time I got to RCA, CDs were the thing. So, to finally have my work presented in this way is really cool”.

Martina checked off another milestone on her list this year when her exhibit, Martina McBride; The Power of Her Voice opened in the Country Music Hall of Fame.

It’s an honor she says she dreamed of for years. Seeing her childhood rocking horse and tea set from her Kansas farmhouse behind glass in the Hall of Fame and Museum is humbling. It’s allowed her a chance to take in just how far she has come, while still enjoying the ride.

“There's an interesting transition that happens in your career, and it takes a minute to kind of adjust to that. I think any artist would tell you the same thing. They’d say, 'there was that minute where I thought, oh, I'm moving into a different phase of my career'. Once you get comfortable with that, it's beautiful. It's an acceptance. You can really look back on what you've done and appreciate it”.

Martina McBride’s Greatest Hits: The RCA Years and White Christmas albums are both now available on vinyl for the first time via Sony Legacy. You can purchase them from Holler’s chosen partners below. 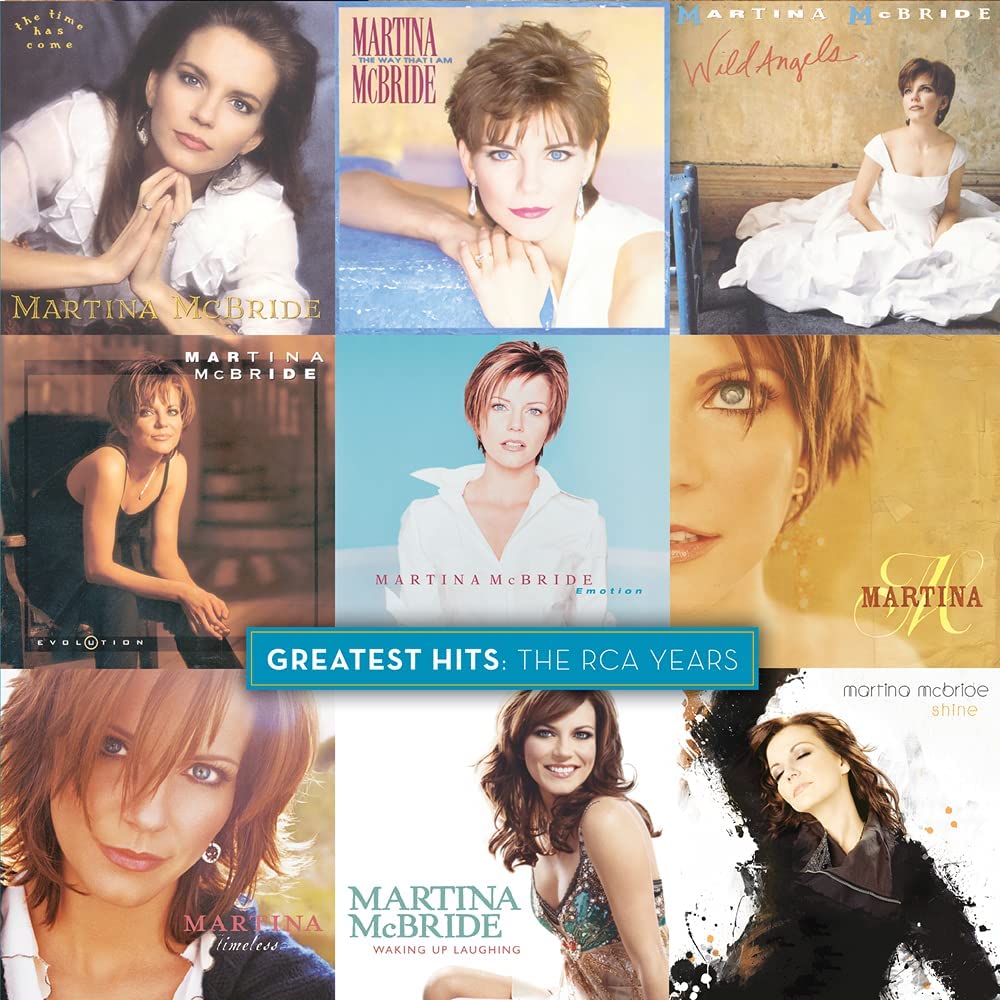 Martina’s hit, ‘Independence Day’, has been voted No.1 on Holler’s Best 90s Country Songs List, you can read the full list and listen and subscribe to the playlist here.