"There's a difference between being a fake and a phoney”, Cowboy Jack Clement used to say. “I may be a fake but I ain't no phoney. Fakery is all right - that's showbiz”.

It only takes one quick listen to Izaak Opatz to know that if that’s the case then he’s as showbiz as it gets. He’s definitely playing the part of being a pop star, but in faking it he somehow ends up being way more true to himself than any of the other desperately "authentic", but truthfully kind of glib, Americana artists out there.

It’s what we at Holler like to call anti-country, and in a world of media savvy influencers and endless sponsored posts it’s truly life-affirming to come across someone who feels as unflinchingly honest and wholly untouched as Izaak Opatz.

For his part, he calls it “Dirtwave” - a genre his friend Dave Martens came up with that's stuck – and it’s a sound which “evokes the middle ground between country's literal, confessional storytelling and the hook and verve of pop”. Basically, if you like John Prine, Dougie Poole, Jonny Fritz and Austin Leonard Jones and you don’t know Izaak Opatz yet, then you’re about to be introduced to your new favourite oddball country star.

He can reach deep into your heart if he wants to, but he can make you smile and laugh just as easily. His songs are playful and irreverent and his pinpoint observations on life’s little absurdities are sung with wry humour and tongue-in-cheek candour.

Listening to his new album, Extra Medium, feels like going on a wild drunken night out with an old friend who you can tell anything to; the kind of friend who makes you laugh more than anyone else in the world, but who can also be thoughtful and wise whenever you need them to be. It’s hilarious and deeply existential in equal measure; overflowing with that weird mix of joy and fear that comes with just being alive these days.

Where 2018’s Mariachi Static drew from Opatz’s fragmented love life as a seasonal Park Service employee and resonated especially with the sensitive dirtbag set, Extra Medium splits time between his native Montana – where he now lives and runs his own custom leather shop - and faraway Los Angeles.

“Most of these songs orbit disappointment, but none of them land there”, Opatz says, “because writing each of them helped bend me from bitterness to some appreciation or deeper knowing. Sometimes feeding my experience into a sprawling metaphor, organizing the mess of heartbreak into some unrelated framework, whether meteorological or cinematic universalized those feelings, making them less isolating”

“Sometimes I just needed to tell the story in narrative form (‘You Don't Look At Me The Same’, ‘Big Sandy’) to explain myself. Sometimes it helped to shrink the stories down to the size of ordinary objects, as in ‘Shampoo’ and ‘Blue Pilot’, before I could wrap my head around them. Either way, all of these songs represent a metabolism of unique disappointment into something new”.

There are so many different ways to get to the heart, and Izaak Opatz has discovered that you can get there just as easily with a wink and a smile and a big fresh dollop of honesty.

Holler sat down with him to talk to him about what he grew up listening to, his custom leather shop and his new album. Where are you from and how has that influenced you?

I was born and grew up in Whitefish, Montana, a small outdoorsy town on the west side of Glacier National Park. So I was lucky to grow up spending a lot of time hiking, skiing, poking around outside. The natural world has slipped into my writing, naturally, showing up in metaphor and just as the setting for a lot of the songs about my own life.

What music did you grow up listening to?

I grew up listening to oldies, the kind of saccharine, hyper-melodic pop of Frankie Valli and his ilk. My parents listened to Comes A Time, Blood On The Tracks, Tapestry, but it took me a little while to come around to that kind of writing. The Beatles kind of bridged that gap, and I went through a big Kinks phase.

Later on, in high school, I inhaled indie pop - The Shins, Rogue Wave, All-Time Quarterback, that kind of thing. My first concert was The Strokes, which blew my hair back. Having grown up on oldies and then tender indie bedroom pop, I'd never heard anything that loud.

Later, I got hooked (and remained so) on Wilco and Jeff Tweedy's slightly more complicated version of rock/pop/country.

How did you end up making the sort of music you do?

I started listening to country music, and it resonated with me in a surprising way. The lyrics sounded a lot like the kind of confessional shit I poured out into my journals every day. So, following a potent early break-up, I just started pumping out my own weird version of heartbreak songs, starting with a pretty simple framework for the music and making sure to give it a twist here and there.

Tell us about the new album, Extra Medium?

More heartbreak. It describes a couple-year period of my life when I was living between Los Angeles and Montana, and touring in between. I was wrestling between wanting to give this music thing and go and stick it out in Los Angeles, and loving the new experiences and people there, and knowing in my gut that I couldn't be happy there long-term.

So there are songs on there that bitch about the traffic, the incessant outdoor advertising, the lack of escape, and there's also a song, 'In The Light Of A Love Affair', that's a love song to the city. And throughout it all, I get my heart broken two to three times, so it's about that, too.

I recorded the album in Los Angeles with my friends Malachi DeLorenzo, Dylan Rodrigue, and Albert Hickman, along with some special guests. It's practically an orchestra, compared to just me and Malachi on Mariachi Static (the last one).

You’re currently pursuing a journalism degree - who are your favourite writers?

Hmm, I'm supposed to tick off a bunch of classy names here, right? I read the New Yorker when I can these days, but haven't had a ton of time to read outside of school. I just reread an old Ed Abbey essay he wrote for Harper's called 'Cowburnt' and was reminded how concise and livid and unafraid his writing is. I really like Jill Lepore, Sherman Alexie, John Steinbeck, David Foster Wallace. Confident, funny bastards with the courage to be heartfelt. 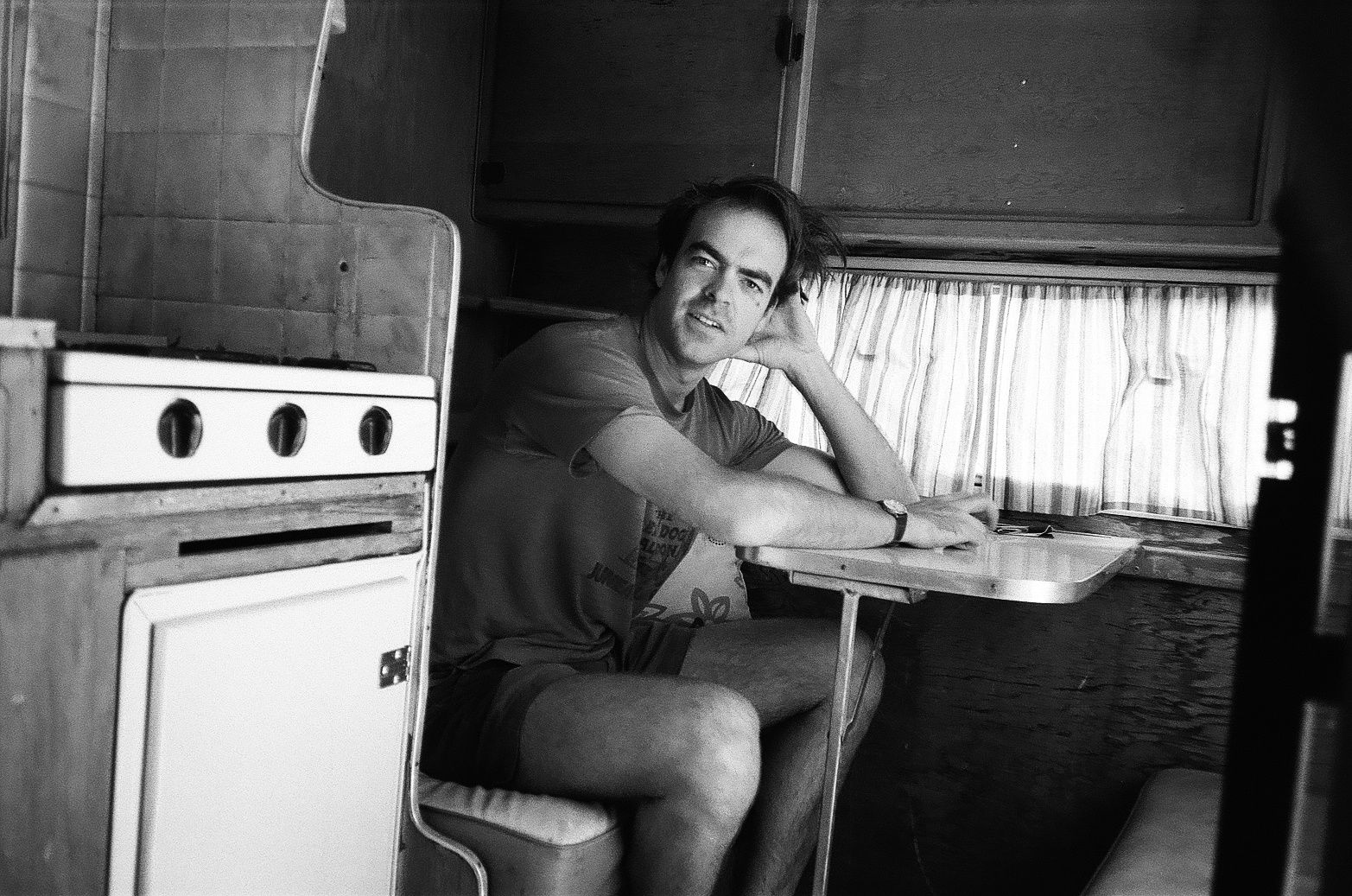 You also have a custom leather shop, can you take us through some of your wares?

Well, I like to joke that I mostly make circles - leather coasters, belts and visors. I also make guitar straps, camera straps, the occasional rifle sling. Pretty much everything is made custom, so it's all different. I recently made a camera strap with a hoya house plant on it and a belt with mermaids and cats. You can check out a smattering of things I've made here.

Which person from history would you most like to meet?

Ah, jeez. I'd really like to meet my grandpa on my mom's side. He passed away before I was born but it sounds like we had a lot in common. That's where part of my love for writing has come from, for being outside and for western duds.

Sure, it'd be great to meet some famous historically significant someone, but I have to think they'd be standoffish and hard to connect with. People never really consider that - just because you have the power to time travel doesn't mean Winston Churchill is going to buy it and it really doesn't mean he's going to have any more time for or interest in a thoughtful sit-down with you than any other bloke.

Hell yes. And I'd like to come back, too.

What’s next for you?

Oof, more school and homework and nose+grindstone for the next couple weeks, and then some fun trips this summer, including a float trip down the Grand Canyon and two tours with my band, in the Midwest and in the West.

Izaak Opatz's album, Extra Medium, is out April 29th on Mama Bird Recording Co. Stream or pre-order and save or share here.