“For me, every song I write, as soon as it's done, it’s in the past" Le Ren explains, as she talks us through her debut LP, Leftovers.

“When I think of leftovers, I think of things that have been cast aside,” she continues. “When they’re picked back up or remembered, they can be repurposed. Leftovers came to represent a collection of feelings and moments of the past that still remain relevant to my present”.

Leftovers is an album of meticulously crafted, country-tinged folk songs that pick apart the intricacies of different relationships throughout our lives. That may be the relationship between mother and child expressed on the gently strummed ‘Dyan’, or the contemplation of possible motherhood in her own future on ‘I Already Love You’.

They may even be paeans to platonic relationships, as on ‘Annabelle & Maryanne’ and ‘Friends Are Miracles’, or explorations of romantic love through ‘Was I Not Enough?’ and ‘Who’s Going To Hold Me Next?'.

It produced an otherworldly record that brings to mind Vashti Bunyan, Joanna Newsom and Karen Dalton, as well as contemporary folk singers including Adrianne Lenker, Jessica Pratt and Laura Marling. Recorded during the pandemic in a rented house in Portland, Oregon; the set-up allowed Le Ren and producer Chris Cohen to capture the stillness and space that fills the recordings, almost as much as the music itself.

Speaking from her home in Montreal, Le Ren opens up about the record and how she approached crafting her songs.

Looking back on Leftovers, are there any points at which you think you’re playing a character?

I know a lot of musicians that take on a persona of sorts, and I feel like everyone is a specific version of themselves while performing. It's kind of impossible not to be, but no, I don't feel like a character. I wish I could do that.

I feel like people that have a persona - like Aldous Harding, for example - are able to be enigmatic and hide certain levels of themselves. It’s like they have their personal life hidden away, and I'm the exact opposite. I like to overshare to a fault, and I wish at times I could just be a different version of myself and hide behind a character. But I don't know how.

On your song ‘Your Cup’, there's this line, “I don't got a lot to say / but I've got a lot to sing”. Do you think we learn more about you from your songs than we would if we actually knew you?

I think I'm a very emotional person, and I definitely process a lot of things in songwriting. It’s like my journal of sorts, but I don't feel like I’m giving more in song format than I am in my day to day.

There’s a Chicks song called ‘Easy Silence’, where Natalie is talking about her relationship with her partner, and in the chorus she sings about the “easy silence that you make for me” and how “it's okay when there's nothing more to say to me”. That was in my head when I was writing the song.

I was talking about a similar relationship - sometimes we can be quiet with each other and nothing comes out in words. I was articulating that.

You talk about The Chicks and you studied bluegrass as a teenager, so there's obviously a country influence in your music. What part does country music play in your story?

I love country music. Honestly, The Chicks are a huge influence. I love their album Fly more than anything, so they're definitely in the wheelhouse of people that I look up to and that I'm trying to emulate. When people ask me what kind of music I play, I definitely say folk music, and then I add “with a country and bluegrass influence” because that makes the most sense to me.

I have so many influences. I love pop music, too. I definitely don't want to be pigeonholed into any genre, I feel like it's hard for me to place myself anywhere when there are so many influences all around me that come through in my songwriting, whether I like it or not.

Do you think of your songs as sad songs?

A lot of people have asked me that. I think what I've realized in talking to people about the songs is that, because I use music to work through things, often those things are hard moments in my life. I’m trying to understand something and then I gravitate towards articulating it in song. So it's rare that I'm happy and think, “Oh, I want to bottle this” - but I want to figure out how to do that.

I'm learning how to draw from different parts of my life and then write, rather than just writing as a reaction. A couple of years ago, when I started writing in a real way for my first EPs, I was definitely making reactionary music because I needed to do it to move through a hard time in my life. So, there are elements of that on this record for sure, but for me, there’s also a lot of moments of levity.

I’m definitely becoming more conscious of this. I want to be deliberate in the music that I make in the future; I don't want to only create from a hard place, because although it's really helpful, I don't want it to be born from that place. I feel like a very balanced, happy individual, generally.

The album is about all different types of relationships, not just romantic ones. What made you want to sing about a platonic friendship in songs like ‘Annabelle and MaryAnne’ or ‘Friends Are Miracles’?

There was definitely a point in time where I was like “Fuck love songs!” because we hear them so much. I wanted to make a record that was just about other relationships, but of course, it's so easy to write about love, and I think it's so important to because there are so many different things going on in a romantic relationship that can be talked about over and over and over again.

My friendships and my relationships with my family are so central in my life, and I have a true love for my friends. So I wanted to talk about that. ‘Annabelle and MaryAnne’ is about one of my best friends. We were living in different cities, and she was going through a hard time, and I kind of used that as a conversation with her. It was a way for me to speak to her; to talk about the love I have for her.

I wrote ‘Friends Are Miracles’ during a time when everyone in my friend group, including myself, was working shitty part-time jobs and it felt like there was no end in sight. Everyone in my group is just extremely talented and artistic, and I could just see where they were going so clearly. At the time, I thought we all had this carrot in front of us, but we hadn't quite reached it yet. So it was just an ode to hard work and honouring the people that had given me so much.

The album closes with ‘May Hard Times Pass Us By’ - were you consciously trying to end the album on an uplifting note?

I'm glad you see it as uplifting. I wrote it out of a place where I was really going through it, and it's about my long-distance relationship, which is challenging at times. It was a hard decision to include it, just because it was so personal. I wrote it literally just for my boyfriend, to be like, “we can get through this”, like a love note.

I'm new to putting out music, so I feel very sentimental about sharing things. Thankfully, he's a musician as well. We both understand what making music means and what sharing it with the world means.

As soon as you're done with a song and you release it, it's no longer yours. It becomes something else. It's interesting because it changes meaning for me. It was meant to be uplifting when I wrote it, but then sometimes when I listen to it I forget that it was a sad point. Now that I’m past that, it’s a nice reminder of the place that we were in, and the place that we've come to.

Le Ren's debut album Leftovers is out now via Secretly Canadian. You can purchase the album from one of our selected partners below: 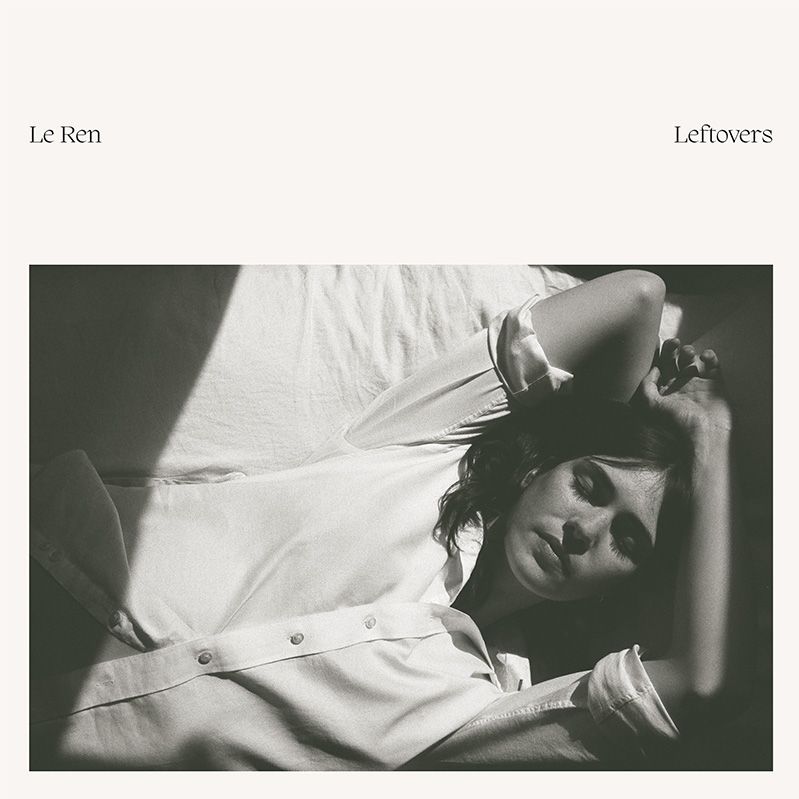