“Never measure your success using someone else’s ruler.” That may just be a new-age adage, but it also seems to be at the very core of country singer-songwriter Riley Green’s story so far.

On the eve of the release of his new seven-song EP Behind the Bar, we joined Green on his tour bus to talk about the process of music-making and what he sees as a win when it comes to his signature brand of country music. Spoiler alert - it’s not the number of spins on country radio, the amount of streams he gets on digital platforms or whatever spot a song lands on the charts. Green relies solely on his fans to tell him when he’s got a hit on his hands.

Before we talk about the new music, let’s talk about what’s come before. Your debut album Different 'Round Here came out almost exactly two years ago. How did you get from point A, playing shows in and around your home state of Alabama to point B, becoming an official Nashville Recording Artist?

I’d been touring for about 10 years in the southeast after college, but I really hadn’t spent time in Nashville until I went up there in 2017, just hoping I could get a publishing deal. My first time there, I met Tyler Reeve at Losers Bar. After talking about writing together, he brought in Randy Montana and Erik Dylan. Then I met Jonathan Singleton, Jessi Alexander, Rhett Akins and Ben Hayslip. I was really fortunate to come across those first few groups, because I’d written songs before but had never been in a co-write.

At the time, I had actually built myself a house in Alabama. I ended up signing my deal about two weeks after that, so I don’t think I could ever say I lived in Nashville. There are a lot of great things about being in Nashville that can’t happen anywhere else, but as far as songwriting goes, I don’t get my inspiration up there. I get it back home.

Those songwriters you met through Tyler are some of Nashville’s finest. It looks like you stayed loyal to your Day One squad as well, because those writers are the same ones you wrote this new music with. Was that intentional, like if it ain’t broke, don’t fix it?

It was. I'm like that about everything. I felt like I could write my next five records with this handful of people, you know? It was the same thing with Dan Huff producing them too. The more we get to know each other and the more time we spend together, the easier it is for us to figure out what we're trying to accomplish. He knows me so much better now than he did two years ago.

Eric Church has been loyal like that – to his writers and to his producer - since his debut 15 years ago, and it has certainly paid off for him. But there must be a little pressure to branch out and experiment when you’re still kind of new to this?

Well, I feel like if there's a problem that new artists have, it’s that it’s hard to have blinders. It's too easy to look at what everybody else is doing and compare yourself or your success. When you see that one type of song is working or that one group of writers is writing a lot of hits, you might think, “I need to go write a song like that”. I think one of the best things you can be now is different. I don't think my stuff is better, it’s just that it’s mine. Nobody else can write it because I write it from the little place in Alabama where I grew up. Not being in Nashville is what helped me find my own thing.

“I never thought I'd have a record deal and having a song on the radio was never a goal of mine. I didn’t write towards anything, I just wrote what I was thinking”

So, you’ve built up your own network of Nashville songwriters, and it’s working out well. Yet sometimes you still write songs by yourself, like you did with ‘Numbers on the Cars’, which is a ballad about the silver linings after an Alzheimer’s diagnosis. Not exactly a party anthem, but country could use more songs like this.

At that time, I didn't put a whole lot of thought into songwriting, because I was writing just for myself - I never thought I'd have a record deal and having a song on the radio was never a goal of mine. I didn’t write towards anything, I just wrote what I was thinking. My granddaddy’s brother, who I’ve known my whole life, was diagnosed with Alzheimer’s, and it seemed like, almost overnight, he just wasn't all there.

One time, when I was fishing with my granddaddy, I just had the idea for the song. It’s not structurally how they would teach you if you went to a class on how to write a song - I don’t know if there’s really even a chorus. It's not a very commercial song that everybody's going to get, but there's a handful of people that have been through something like this and they really get it. I mean, there's just something about that song; I have lifelong fans from it. It may not have reached a mass audience by any means, but if you've been through it, you can relate.

That song, like so much of your work, sounds more than just autobiographical. Some of the nitty-gritty details about your life and your roots make it sound like we’re right there with you in Alabama.

They're all pretty close to the truth of my life. ‘Numbers’ came from what we did every Sunday: going fishing and then watching the NASCAR race. ‘Nesbitt Lake Road’ is literally where my grandparent’s house is, and on ‘I Let a Damn Good Woman Leave’, there’s a line about how I stole a pack of gum from Edwards Grocery. In fact, Mrs Edwards herself sent me a Facebook message asking if it was true because she’d been getting calls all day. With ‘That What’s I’ve Been Told’, it’s about getting back home and being inspired; every line in that song came from thinking about the road I live on.

So, how about your new single ‘If It Wasn’t for Trucks’? That sounds like it came straight out of your Alabama raising. How did fans react to that one when you started playing it live, back before Covid?

I wrote it a couple years ago, and the first few times I played it live, it just kind of had a life of its own already. People were requesting that song and singing along with it, and I hadn’t even recorded it yet. I think that’s one of the coolest things about fans. I can’t tell you what Eric Church songs went No. 1 and what songs didn’t, but I know what songs of his I like. Radio airplay is great, don’t get me wrong, but when my fans are singing a song back to me, that’s when I know I’m on to something.

Tell me about your collaboration with Jessi Alexander on ‘That Was Us’. I love her songwriting and her voice, so I knew I’d love it before I even pushed play.

Jessi and I finished that one after I’d started writing it with Thomas Rhett. He wanted me to take him duck hunting a couple of years ago, and we ended up writing about five songs that day. We didn’t finish any, but ‘That Was Us’ was one of the ones we came up with. When I’m writing something that’s closer to a love song, I always want Jessi there, because she steers me in the right direction. When we finished, I wanted her to be the one singing on it, because I love her voice so much.

I can hear some older country influences on all seven of the new songs, especially with all that fiddle. Does that come from a handful of country stars who influenced you?

I think I’m less mindful of that than I should be. My sister Casey was a big Tim McGraw and Kenny Chesney fan, my sister Lindy liked Sublime and Weezer, my mom loved The Mama & The Papas and my Dad liked Lynyrd Skynyrd. I guess I was influenced mostly by whoever was driving me to school - I was all over the place. When I’m performing, I’m much more influenced by Merle Haggard and George Jones, because my granddaddy was so passionate about that music.

Once I started touring after college, I played so many country cover songs that I’d try to write a song like Jamey Johnson and Corey Smith, just so I wasn’t playing cover songs all night long. The only thing I could do to stand out was to write. Nobody else could write the songs that I wrote.

“I knew it was going to be a big song for me - just from that one night. I just didn't know to what extent”

I imagine that with all the quarantine downtime you’ve had, that meant more time to keep writing songs. Right?

Yes, and one of the only things I ever get stressed out about in this industry is not having enough music out. It’s almost like more is more right now. Sure, I had way more time and wasn’t able to tour because of covid, but that killed me, because I judge my songs off of playing live and seeing the reaction of the fans. ‘I Wish Grandpas Never Died’ is the best example of that, because that one was so fan-driven. We had a different single on the radio, called ‘In Love by Now’. But when I played ‘Grandpas…’, within the first couple of lines, I knew it was going to be a big song for me - just from that one night. I just didn't know to what extent.

If you hadn’t ever picked up a guitar or a pen in college, or had the launching pad from Losers, what do you think you’d be doing now?

I just assumed I was going to be building houses for the rest of my life. That’s what my dad did and it’s what I was doing until I signed my record deal in 2018.

So wait. Earlier, when you said you built your house in Alabama, did you mean that you literally built it?

I did, and I hope it’s the last one I have to build. My dad’s a carpenter, so we framed it. Then the only thing that I subbed out was the plumbing and electric. I had played a private party at my plumber’s lake trailer two years before and didn’t let him pay me. So, when I built the house, he did the plumbing for me. I’d worked for my electrician for about six months and didn't let him pay me either, so he did my electric. I’d told them I’d call them when I started my house. I ended up building a lot bigger a house than I could have afforded at that time, not knowing I had a music career in front of me. 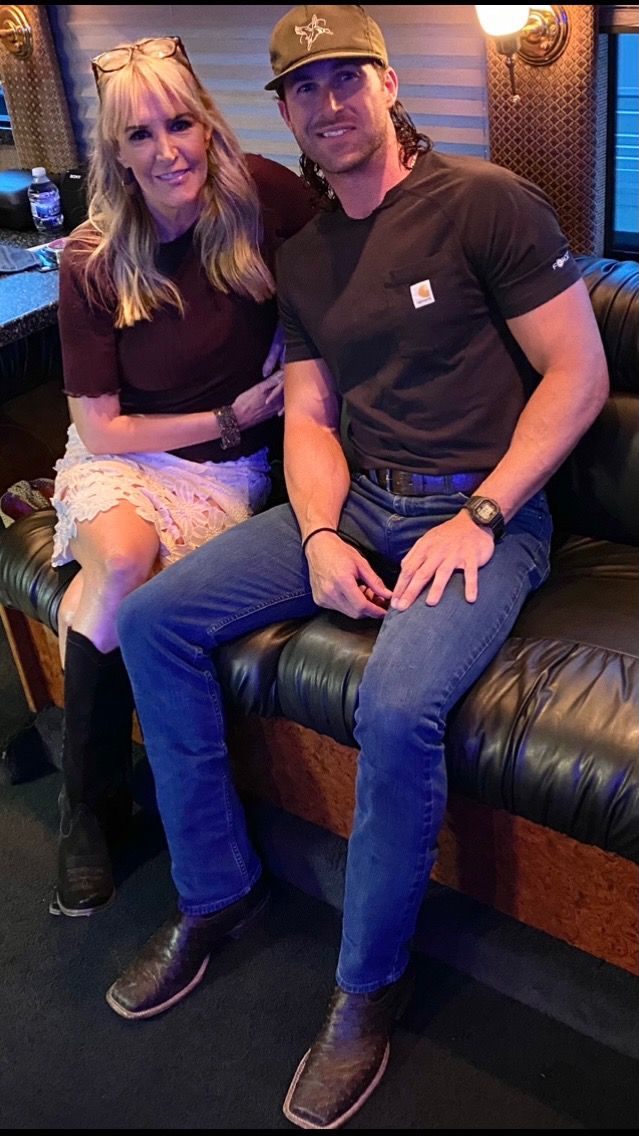 Riley Green's New EP, Behind The Bar, is out now via Big Machine Label Group. Watch the video for 'That's My Dixie' below.