Abruptly pulled from the road (like most everyone else) in March 2020, blossoming British star Jade Bird was at a loss of things to do, so she tried just about everything.

Still with a tour’s worth of energy built up, she spent the following months doing everything from reading to learning to knit, doing yoga, running, growing potted plants and caring for her mixed Border Collie named Tea, that she adopted after moving to the United States last November.

The time away from music also meant a break in the recording process of her newly released album, Different Kinds Of Light, which she began at the start of 2020 but was unable to complete until August.

However, the pause proved to be a blessing in disguise of sorts for Bird, who used the time between to pen an additional half dozen songs that help to make the record easily her most outspoken, empowering collection to date.

Catching up with Holler whilst back home in the U.K., Bird discussed her transition to living in the United States, the threads of feminism running through Different Kinds Of Light, sugary treats and more.

What does it feel like being back playing shows again? I remember seeing you in May during your stop in Lexington, KY on your acoustic tour and you seemed even more joyful and charming than when I’d last seen you pre-pandemic.

I loved that tour. It was our first one back so there was no pressure. We were able to play the songs as they were first started. It was so warm and intimate, and everyone was so nice too. I’m not sure if they were more excited to be back or if I was.

Is taking those stripped-back, acoustic versions to your live performance something new or is it familiar territory for you?

No, I started performing live in a stripped-down fashion. I feel like that’s the beginning and the end for me. I literally still sit and write my songs from the guitar up - it’s how I first started touring in the States and the U.K. with various acts. It’s no stranger to me, but more like returning to an old, familiar friend when I get back to doing fully acoustic shows. It reminds me that I can do it that way too and have it still be really, really fun. 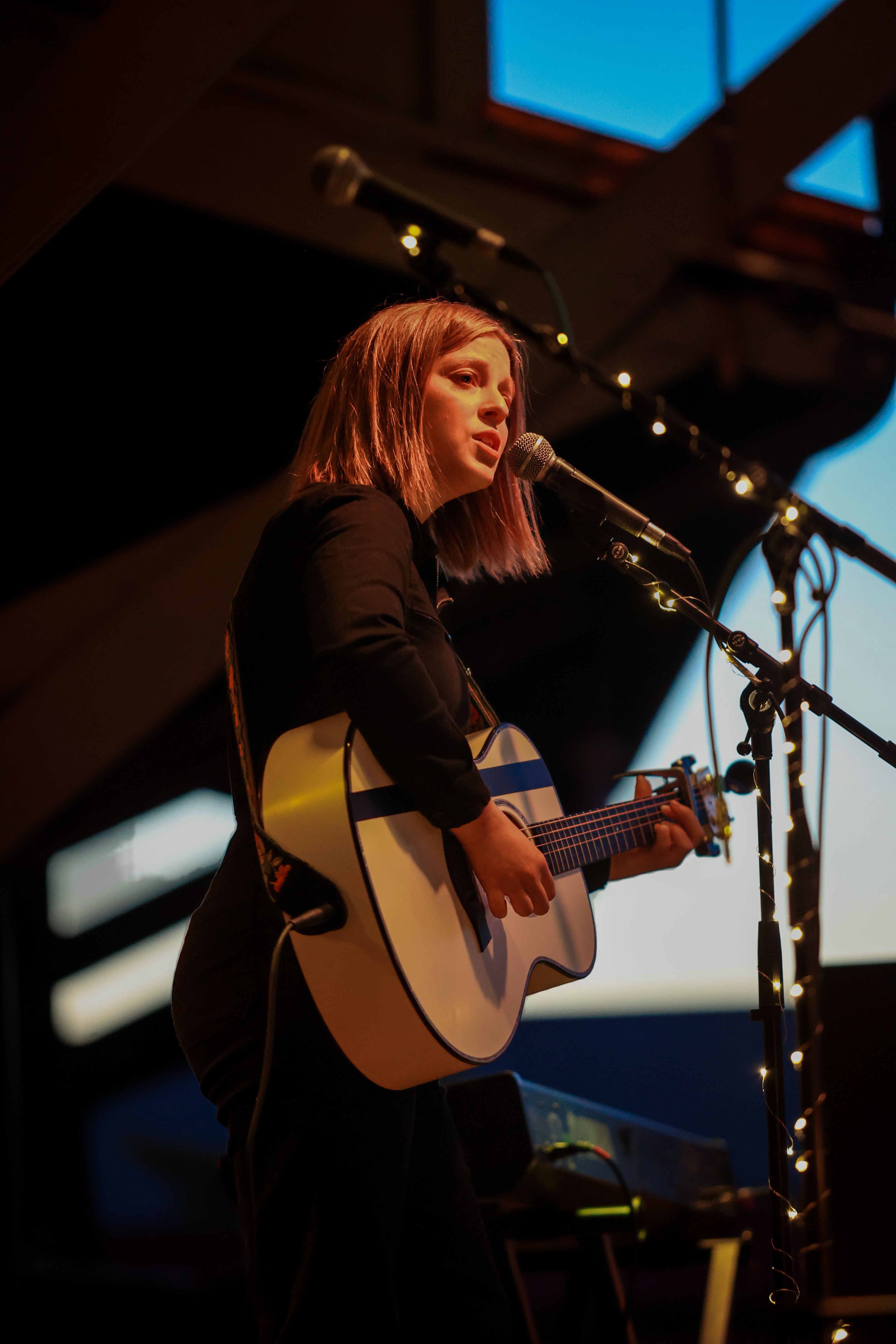 Sounds like rather than it being an Achilles heel, it’s one of your biggest strengths; a comfort zone of sorts?

Exactly – it is me returning to my comfort zone in a weird way. With the band it’s hard sometimes because you have to rehearse with five people and get them on the same page with songs that I myself know almost as well as a blood relative.

There’s a lot more riding on it with a band for me, because everyone also has their own job and responsibilities. So there’s always that added comfort in going acoustic - it’s easier in that setting to sing and say what I want, whenever I want.

Another part of your performances that I love - whether it be acoustic or plugged-in - is your personality and banter on stage between songs. Have you always been that comfortable in front of an audience or is it something you’ve had to grow into?

I remember being pretty terrified when I first started playing live when I was 13 or 14. I think everyone has that when they first start performing. But as soon as I got a residency inside a blues bar in London when I was 16, I started growing more comfortable. It stems from this nervousness of giggling and saying what I want to say.

I’ve managed to evolve it into almost being like talking to a friend - that’s how I’ve always seen the audience, especially at one of my shows. It’s like each show is a bunch of potential new friendships in a really smitten way. So I treat it like that and just giggle, laugh and say whatever comes into my head at the start, which is usually complete nonsense. It makes things feel a bit less serious, which is nice.”

Although you’re back in the U.K. now for a run of shows, I know you relocated to Austin, Texas last November. What has that transition been like for you?

I made the move during the end of the U.S. Presidential Election, which was quite an interesting time, to say the least. I’m enjoying being back in the U.K. now though. You guys in the States have insanely high sugar content in your treats. We’ve got sugar taxes over here. I’m actually munching on a half-eaten cherry bagel, a cup of tea and a chocolate orange. I’m a bit of a sweet tooth.

“Musically, I felt like I’d found a little family in Brandi, Sheryl, Savannah Conley, Erin Rae and others”

You definitely need to monitor your snack intake over here a bit more. Glad to know I’m not alone in my fight against the sugary temptation.

It’s like a minefield! But aside from that, my relationship with the States has been very welcoming. That’s a big reason why we chose to move there. Musically, I felt like I’d found a little family in Brandi [Carlile], Sheryl [Crow], Savannah Conley, Erin Rae and others. I just felt really welcomed, so I thought, in that case, why don’t I come to their house (metaphorically speaking) and see what happens; see if I can build off that?

It sounds like the move has gone well for you despite the unprecedented circumstances brought upon the world this past year.

Yeah, it’s been a weird year. Moving when we did left my partner and I not always knowing if we’d be safe. We didn’t know if we’d suddenly have to hop back on a flight to the U.K. with little to no notice. And getting a Visa during the pandemic was a nightmare in itself.

But then I also got this record that I don’t think I could have written without the pandemic. I wrote half of it in Mexico City because we had to quarantine there at one point. I chose to see it as fate in a way, even though it was very difficult for everyone, myself included. Like most artists I’ve just been trying to make the most of the strange times. I think that’s why you’re seeing such a flurry of albums coming out right now.

Given that half of Different Kinds Of Light was written during the pandemic, did any of the political strife creep into the content of the songs within? ‘Red White and Blue’ seems like it might be tackling some of that.

Those themes absolutely crept into some of the songs. ‘Red White and Blue’ is about when my partner flew to Virginia while I was in the middle of writing for the record. He ended up getting into a car with and talking to a Vietnam War veteran. It quickly became clear to him that this man had severe PTSD symptoms, was hallucinating while driving and struggling with receiving adequate healthcare.

I was so moved by it because a state that he’d fought for had basically abandoned him in his last moments of life. My parents both met in the Army, my grandparents the same. I never thought about writing the song, it just came to me all at once at the end of one of our days in the studio. I immediately sent it over to my partner and then my father, who absolutely loved it. It quickly became something I couldn’t leave off the album.

But apart from that, politically I’ve always had a strong thread of feminism through all of my records. There’s a strong sense of fury that comes with being a young woman with rights taken away. For example, ‘I’m Getting Lost’ is about not being able to walk the streets at night on your own. So politically there’s always things that line up. Being a person in the modern times is kind of political in itself, especially as a woman.

Another track from the new album that seems to have similar themes is ‘Honeymoon.’ Do you mind telling me a bit about it and the story behind the song?

I believe that’s the oldest song on the record. I first tested it out on the road with Hozier. I wrote it about all these vignettes of my mom, my grandma’s and my relationship. I lived with them for about seven years in a tiny little house so we’re all very close.

All of our experiences have morphed into this song about somebody always working to please their other half. They’re always putting themselves out there to do their best to make themselves feel like every day is a honeymoon. It’s basically three different generations of experiences trying to please the man in the relationship. That was my frustration there.

Obviously not all of your songs tie into those themes though. Another on the album that I really dig which I believe to be an example of this is ‘Now Is The Time.’ Mind telling me a bit about it?

Sure! That song was very inspired by the Bee Gees. We had our drummer, Chris Powell, play as if he was a drum loop similar to how the Bee Gees had to use a loop on ‘Stayin’ Alive’, because their drummer didn’t show to the studio.

The meaning of the song came from sitting in an apartment during quarantine in Mexico and wanting to write a song for my partner, specifically about getting out and having a joy about life. I wanted to instil this enthusiasm and belief in this person. It came from that and ended up being this nice memo for the whole world being calm, like now is the time.