Yola - Stand for Myself

Relish in one of contemporary music’s most dynamic voices at the peak of her songwriting powers and soul saturated vocal intensity. 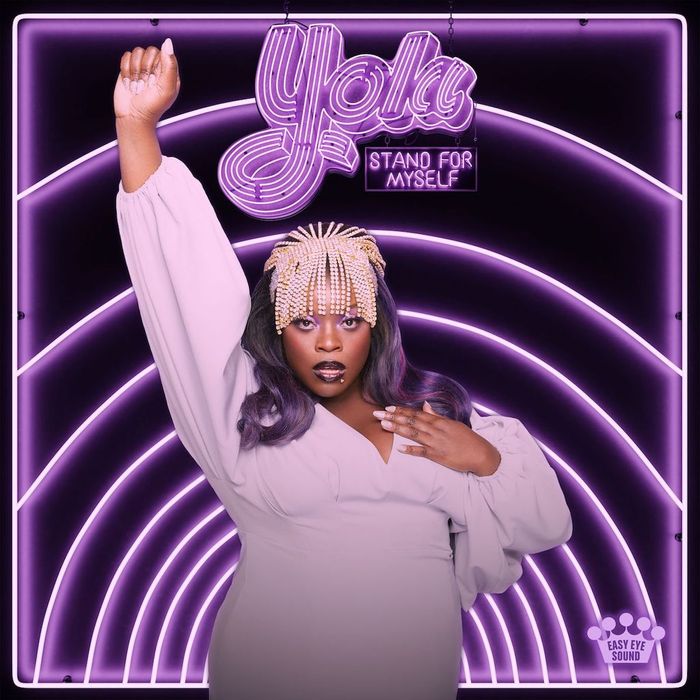 “It’s a paradigm shift,” says Bristol, UK hailing artist Yola about her new record, Stand for Myself. It won’t take long after pressing play to hear why that’s certainly true.

Debut releases don’t come much more successful than Yola’s 2019 modern-day classic Walk Through the Fire. Plucked from the obscurity of doing faceless backup vocals by Black Keys frontman and all-around music renaissance guy Dan Auerbach, Yola burst out two years ago with a force most veterans could only dream of. The singer’s simmering yet potent soulful country/blues gem immediately put her on the popular radar as one of roots music’s most gifted newcomers.

A few years and one pandemic later, Yola’s follow-up once again teams her with Auerbach, but this time the stakes are higher and the sound has shifted. First track ‘Barely Alive’ builds from a subtle opening to a full-fledged soul burner, featuring no less than 11 musicians cooking on a fire that explodes as Yola wails “When will you start living / now that you survived”. We’re then transported back to the 70s with the disco rhythms of ‘Dancing Away in Tears’, a song that could have shared space on a Three Degrees or Rose Royce disc from way back in the day.

Though the rootsy elements of Yola’s previous work aren’t totally overlooked (the bluesy, 60s-styled ‘The Great Divide’, along with the smoldering ballad ‘Like a Photograph’, might have been included in this disc’s predecessor), this revamped sound is more propulsive and lyrically direct.

The pop-rocking ‘Whatever You Want’ should make for a perfect single with it's driving beat, while ‘Break the Bough’ adds Stax-styled horns for extra oomph as Yola goes full Tina Turner when the punchy production kicks in. The singer gets socio-political on the rollicking ‘Diamond Studded Shoes’ (“They buy diamond studded shoes with our taxes / Anything to keep us divided”) which sounds like it came off an old Doobie Brothers album.

Natalie Hemby gets a co-write on the riveting closing title track. Yola shifts her voice here, gently singing above a raw acoustic guitar strum; “It was easier to sit / It was easier to give in / Than stand for myself”. The song revs up to an Aretha-worthy explosive crescendo, with The McCrary Sisters bringing the gospel and a production-punching psychedelic guitar solo. Phew.

Yola explains that this refined and eclectic direction is closer to her core, saying; “This is who I have always been in music and life”. The cover photo picturing her in full disco-queen dress and pose alludes to that.

Those riveted by her initial blast will welcome this somewhat rejiggered, enhanced direction. Anyone new to her talents can start to relish in one of contemporary music’s most dynamic voices at the peak of her songwriting powers and soul saturated vocal intensity.

Stand for Myself is out on 30th July via Easy Eye Sound.