Rhiannon Giddens doesn’t need much time or supporting instrumentation to create fervently moving art. Even though the stripped-down qualities of They’re Calling Me Home are the result of the pandemic, they yield some of the most stirring music you’re likely to hear, this year or any other. 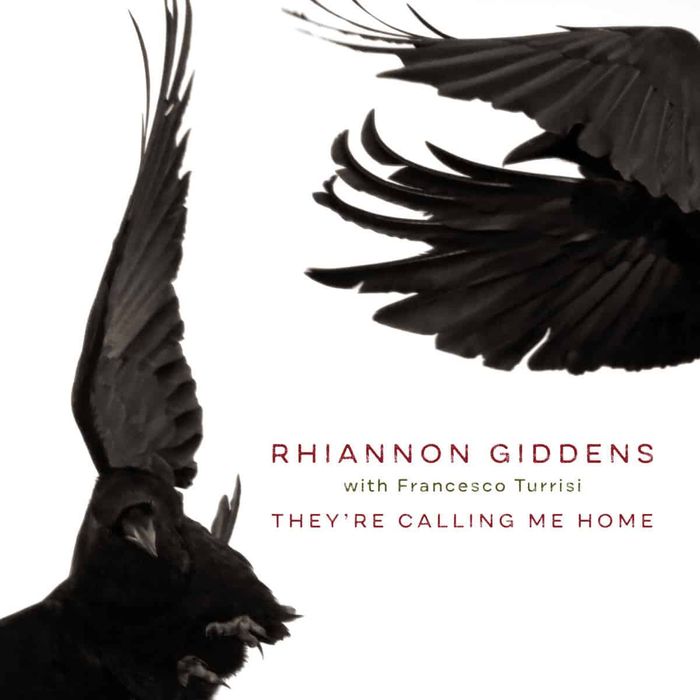 Six days. That's all it took for Rhiannon Giddens - with assistance from musical partner Francesco Turrisi - to record the dozen songs of They’re Calling Me Home, from a small studio on a working farm outside of Dublin, where the two have been ensconced during the pandemic. The transcendent results though belie the brief but clearly inspired process.

With her pure crystalline voice, it’s clear that classically trained Giddens is comfortable singing a diversity of music, encompassing everything from the deep folk to show tunes, country and opera. Her vocals flow with such powerful emotion that she doesn't even need the sparse instrumental backing throughout They’re Calling Me Home to convey the depth of gloom, loss and desperation of this modest collection. But her talents don’t stop there. She is also proficient on viola and various banjos featured throughout these 12 traditionally rooted pieces.

As the record’s name implies, death is a major factor running through these selections. The set kicks off with the title track, where Giddens sings, “My time has come to sail away” in a haunting voice over droning accordion and melancholy viola. The concept continues with her stark version of ‘O Death’, the classic account of a sinner begging death not to take them. Giddens overdubs her vocals, backing her leads with ominous humming and wailing. It’s chilling stuff.

The closing ‘Amazing Grace’ needs no introduction, but this interpretation disposes with lyrics as Giddens simply moans the melody atop Turrisi’s frame drums and guest uilleann pipes, the latter a nod to the country in which these recordings were birthed. The effect is poignant and somewhat unsettling. The original composition ‘Avalon’ finds the singer accompanying herself with bluegrass inflected viola, as she again sings about death, “When the time has come, and life is bare / I’ll make a journey, and I’ll know where”.

Giddens breaks out the banjo for a sparse take on the archetypal protest anthem ‘I Shall Not Be Moved’ but adds her own lyrics. There’s additional grief in the sorrowful ‘Black as Crow,’ a traditional Irish tale where Giddens takes the part of a woman who bids farewell to her lover with, “As time draws near my dearest dear / When you and I must part / How little you know of the grief and woe / In my poor aching heart”. Ditto for the protagonist in ‘When I Was in My Prime’, sung by a woman whose heart is broken by a no-good man and vows to “save enough crystal tears to wash his deceitful face.” Ouch.

Regardless of the less than jubilant subject matter, these gems are so passionately conceived, arranged, sung and recorded that the listener is swept away with their humble, uncluttered beauty. Rhiannon Giddens doesn’t need much time or supporting instrumentation to create fervently moving art. Even though the stripped-down qualities of They’re Calling Me Home are the result of the pandemic, they yield some of the most stirring music you’re likely to hear, this year or any other.

They're Calling Me Home is out now via Nonesuch Records