The Panhandlers at Billy Bob's Texas

I’m walking down a long, narrow alley behind Billy Bob’s Texas in Fort Worth. An overcast gray looms overhead. Two buses hum in the near distance as my boots clack on the blacktop pavement below. A lone figure emerges from the shadows. Wrapped in denim and flannel, a bandana drapes over his mouth hiding a five o’clock shadow and smile.

It’s John Baumann, country singer-songwriter and one quarter of the newly formed West Texas band, The Panhandlers. Along with fellow songwriters Josh Abbott, Cleto Cordero of Flatland Cavalry, and William Clark Green, the four front the new outfit. Much like the name suggests, they lean in heavy on those gritty West Texas roots and sun-soaked heritage.

What started as a collection of West Texas waltzes and Dust Bowl covers from heroes like Terry Allen, The Flatlanders and Guy Clark quickly morphed into an album’s worth of originals that drew from the same desolate desert highways, cotton fields, tractor rhythms, and from the seat of a saddle overlooking the South Plains. 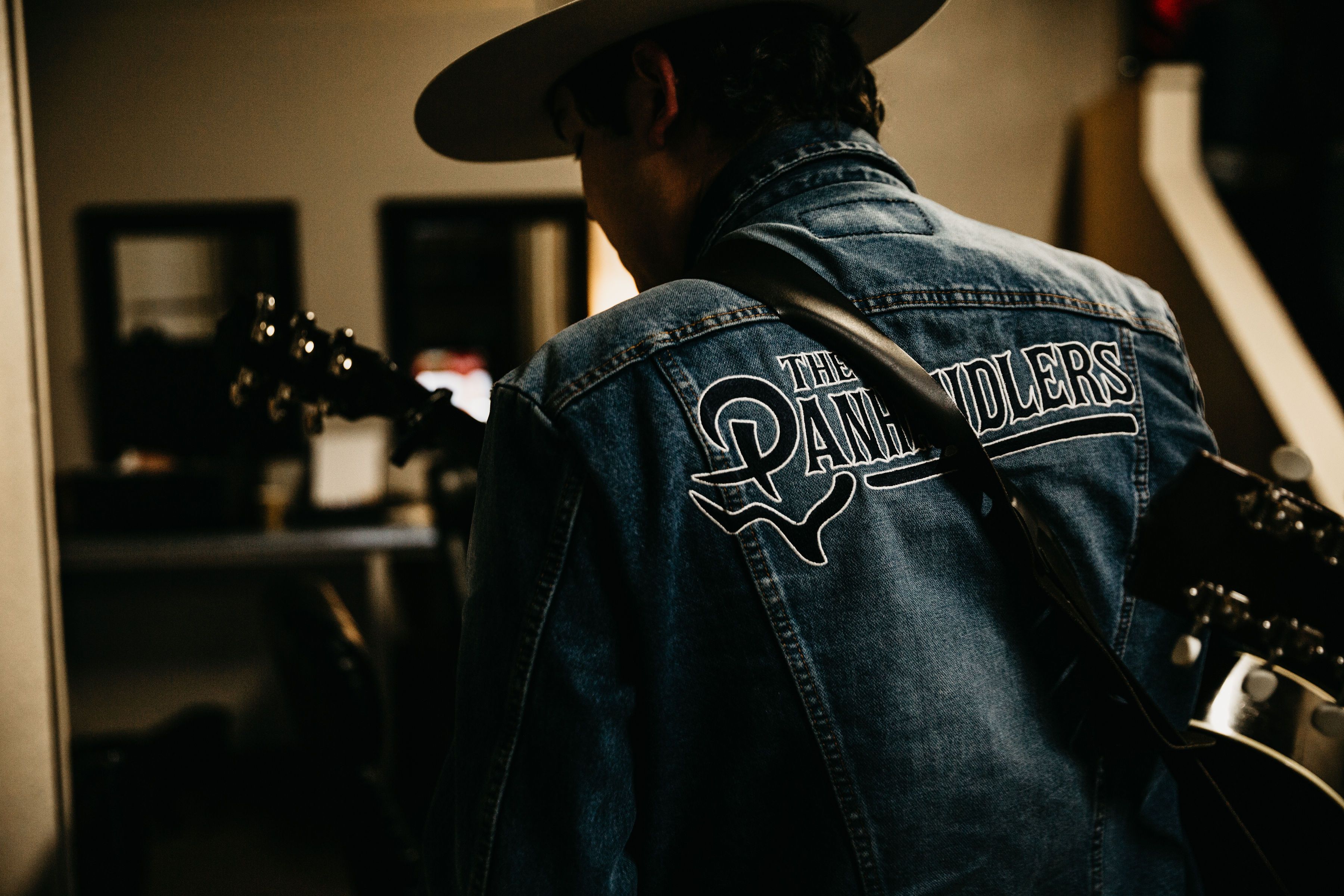 It feels like a lifetime ago when I was just a wallflower down in Lockhart, Texas at The Bunker (Bruce Robison’s homespun studio) with The Panhandlers as their self-titled debut was rounding into form and taking shape. Long before the pandemic made the world hit pause, they’d planned on showcasing their music with a handful of shows on the Texas Country Festival circuit and weekend runs between their individual tour schedules. As you’d expect, much of those plans were put on hold or scrapped altogether. Still, on a Thursday night in October, they made the best of it, playing their official debut at the World’s Largest Honky Tonk.

There’s a temperature check at the door as we enter the back corridors of Billy Bob’s. Much of the band is already on stage or in the green room prepping for the afternoon soundcheck. There’s already a growing buzz feeding on a mix of nervous energy and the excitement of performing for the first time in months. Soon, they’ll ride that swell of emotion, letting it take them home when they break into their set in front of Fort Worth’s finest. But for now, it’s just sound engineers, staff, and a handful of friends and family who make up the soundcheck crowd.

“Nobody chooses where they’re from or where they’ll go when kingdom come,” Baumann sings. They’re shaking loose the rust as they hone in on the kinetic cadence of ‘No Handle’. Written by Baumann in an inspired rush, the rollicking anthem feels like the project’s unofficial mantra. Baumann, Abbott, Green, and Cordero trade off lines chalk full of earnest expressions, plainspoken scenes, and West Texasisms. 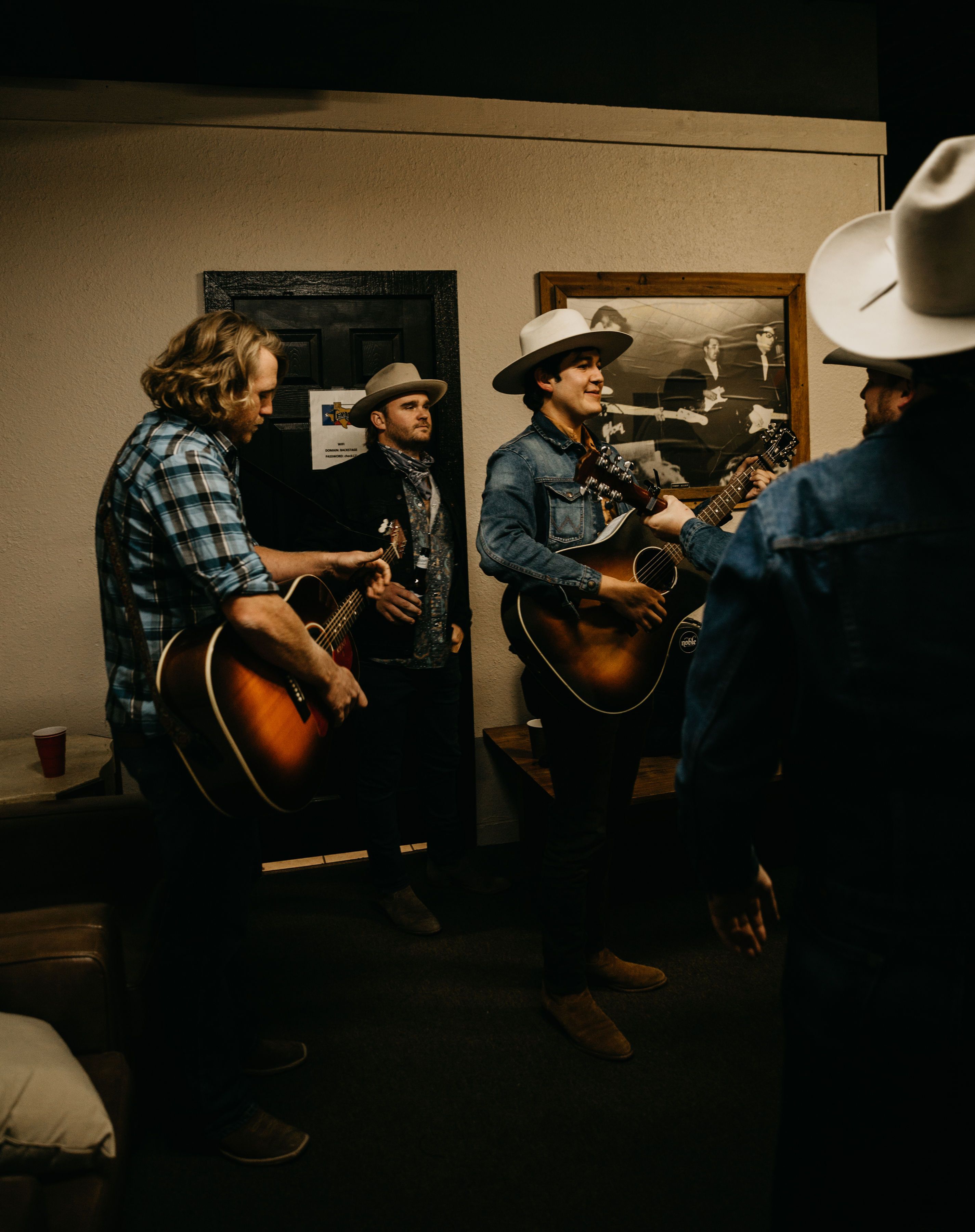 They run through ‘West Texas In My Eye’, a modern classic that’s just as sprawling as it is comprehensive. It’s the lone contribution to The Panhandlers that’s written by an outside songwriter - the wry, keen Charlie Stout. He’s sitting across the table watching as they play through once more. Though he’s often a coy cynic, the denim-clad Stout can’t help but beam with satisfaction as his contemporaries roll through his West Texas epic. Originally from West Virginia, consider it Stout’s West Texas dissertation.

Another hour on stage trucks on by. Abbott, the band’s de facto leader, plays train conductor ensuring everyone is comfortable and confident as they roll on through songs and arrangements. Naturally, they’ll hit a few snags later in the night, but nothing worth fretting over.

The low murmur of the crowd breaks into applause, yelps and hollers as the band takes the stage"

One by one, they make their way into a green room that’s slowly but surely coming to life. They do a round of interviews, squeeze in a bite for dinner, and trade in t-shirts for pearl snaps. It’s all a bit frantic and is a reminder that even this takes getting used to once more. Out front, a crowd creeps through the front doors. Here in Texas, music venues are capped at 50% of their official capacity. They’re held to those same forehead temperature standards, mandatory masks, and staying at their seats.

The low murmur of the crowd breaks into applause, yelps and hollers as the band takes the stage. Cordero breaks the ice officially kicking the night into gear with ‘The Panhandler’. It’s a bleak ballad built on Cordero’s brand of haunting flatland folk, ghostly harmonies, and the chilly warble of pedal steel. 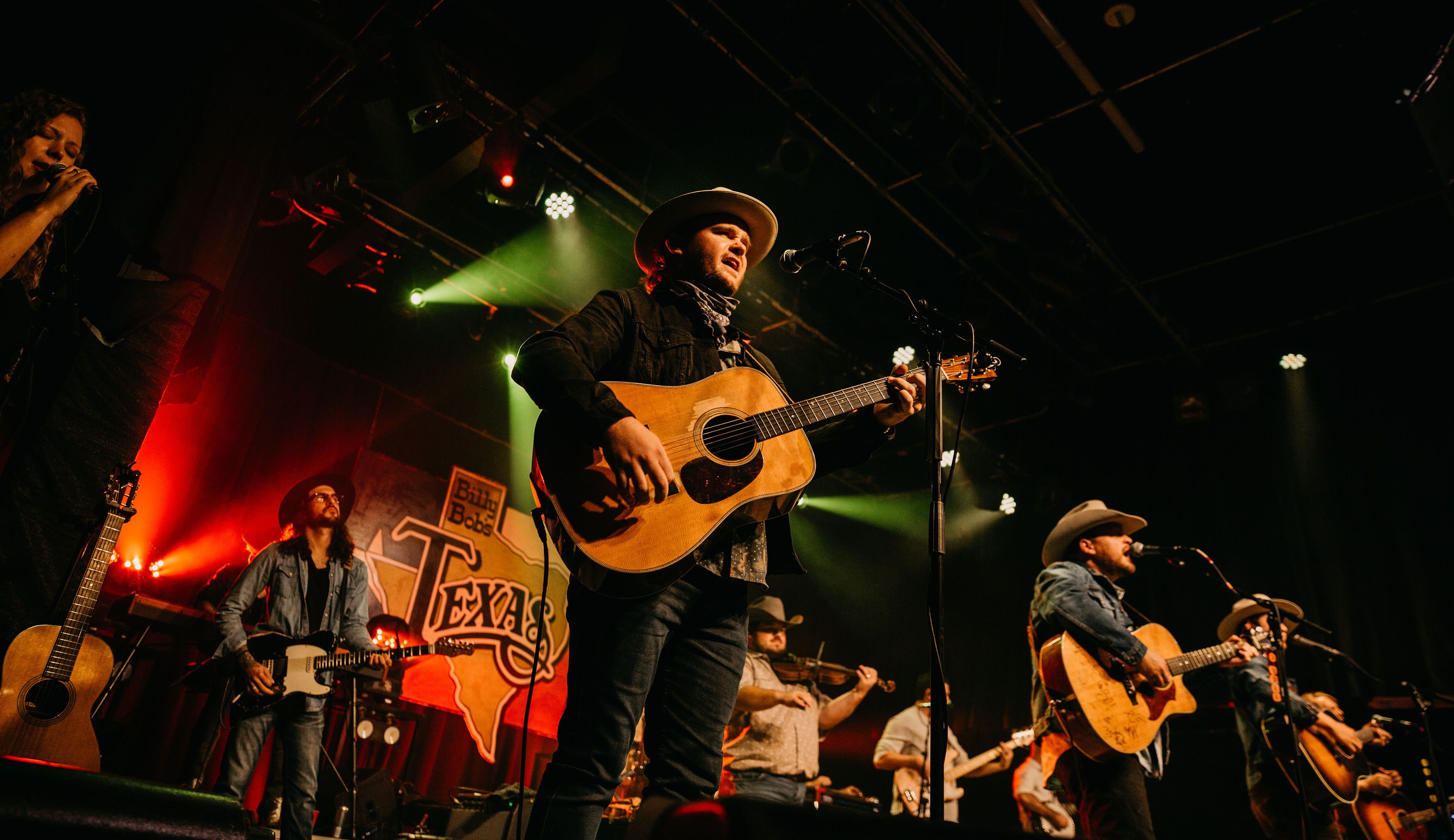 They chug on through the banjo-laden ‘This Flatland Life’ and the desperado cowboy tale ‘Panhandle Slim’ before hitting Stout’s ‘West Texas In My Eye’. It’s just as apparent to the crowd that this one cuts a little deeper than the rest.

“Playing songs ‘til after midnight, staying up ‘til dawn. There’s something in the dust and wind that keeps me hanging on,” sings Green. It bears newfound meaning in a world struck by a looming virus and uncertainty.

They pay homage to songwriting heroes like Lubbock sons Butch Hancock and Terry Allen, country music legend Merle Haggard, and the late Jerry Jeff Walker, who had passed just the week before. In particular, Hancock’s ‘West Texas Waltz’ and Walker’s ‘Life On The Road’ show that even rambling six-minute storytellers are worthy of set lists.

Part of what makes The Panhandlers project intriguing is how the four songwriters were going to incorporate their own storied solo catalogues. As Panhandle natives - for the most part - their individual catalogues have long echoed the vast rural sprawl of the South Plains and Far West Texas.

This go-round, Abbott debuted ‘The Highway Kind’, the mesmerizing title track off his new album while Green lets loose on fan favorite ‘Creek Don’t Rise’. Baumann’s snide yet charming ‘Midland’ rings out with the echo of a singalong crowd. On the sparse fiddle waltz ‘War With My Mind’, Cordero brings out Kaitlin Butts - the two were married this past fall - for a scene stealing duet.

Despite the fill of tractor songs, oil rig jigs, and lonesome highway ballads, it’s the moments on songs like ‘War With My Mind’ that showcase another side of West Texas - the chasms of lonesomeness spurred on by isolation and idle hands.

They close and encore with an ageless classic, Terry Allen’s ‘Amarillo Highway’. Within seconds of the opening piano, the crowd knows what’s coming and lets out a roar. “Well, I don’t wear no Stetson, but I’m willing to bet, son, I’m a big a Texan as you are,” they howl. It’s raw, coarse, and instinctively West Texan. More than anything though, it’s communal and replenishing. It’s necessary. 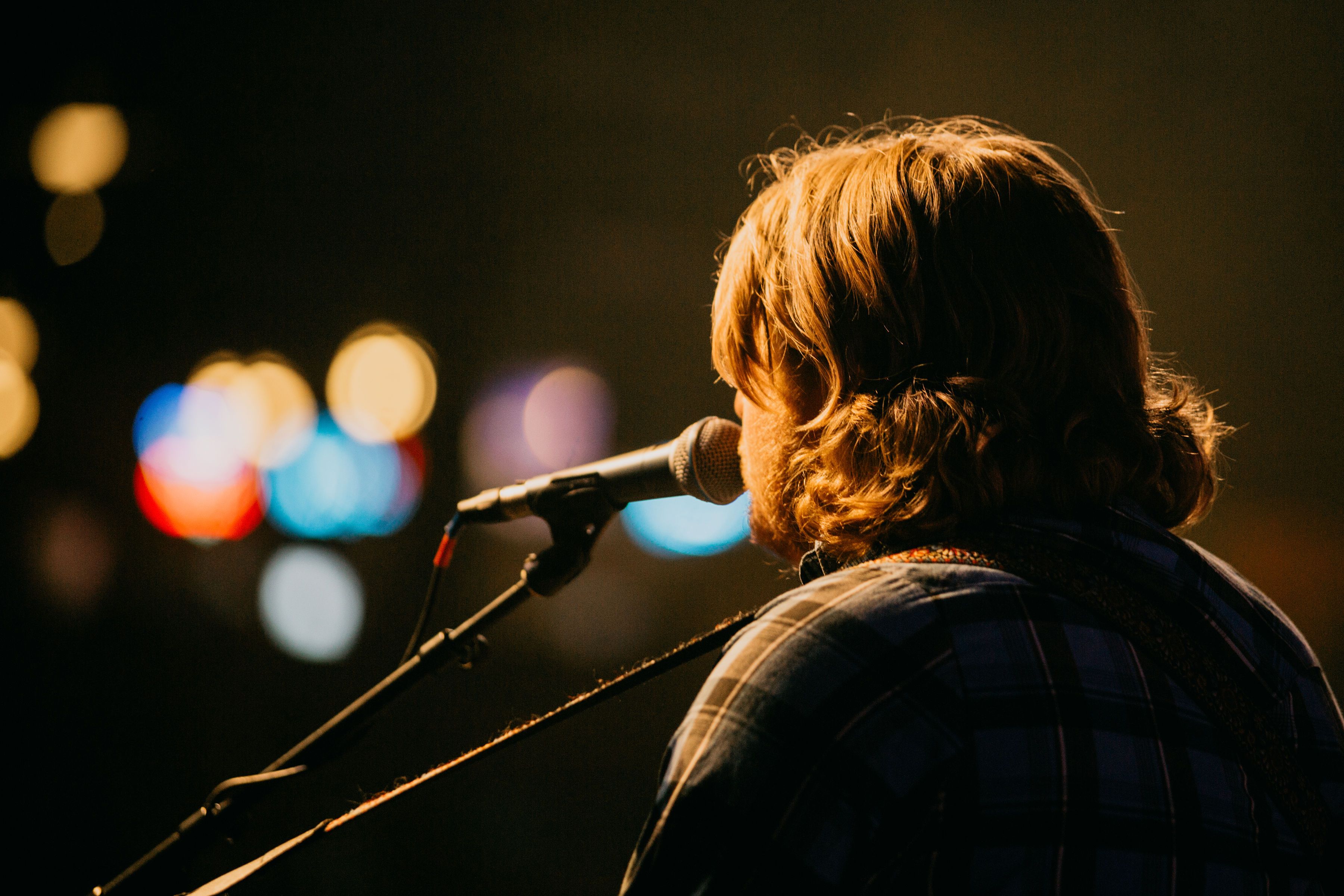 They’d break back into the Lubbock anthem once more if they could. Without ever addressing it, they soak it all in knowing full and well that despite it being their debut performance, it’s also their last for a good, long while.