Spanning the breadth of Doc Watson’s career, this new box set offers a thorough —if disjointed —overview of one of the most important country/bluegrass figures of the 20th-century. 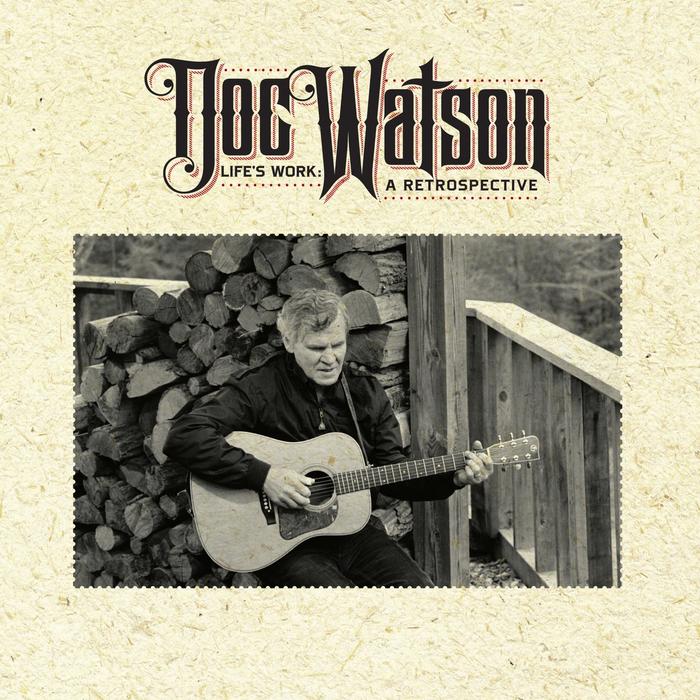 By the time country/bluegrass giant Doc Watson achieved national exposure with the release of his self-titled debut album in 1964, the rustic way of life he represented was already starting to change.

Watson would play a crucial role in bringing traditional Appalachian music to the masses, but he was also open to outside influences as far back as his childhood. His entire career, in fact, is a testament to the power of crossover appeal and musical cross-pollination.

Life’s Work, a four-disc box set that covers the bulk of that career, gives us a comprehensive—if disjointed—overview of a musical journey; one that ended with Watson being universally regarded as one of the most important figures in 20th-century music.

Born in Deep Gap, North Carolina —a community nestled in the Blue Ridge Mountains, with an official population count that still hovers under 2,500— Watson took to music early, starting out on harmonica before being introduced to the banjo at the age of 11.

“In the summer of 1934,” he explains during one of the pre-song monologues featured on Life’s Work, “my dad made me a little homemade banjo. It was fretless, and it didn’t look quite as pretty and shiny as [the one I’m playing right now]”.

Watson elaborated on this further when he spoke to NPR’s Terry Gross in 1988: “Dad showed me a few of the old-time frailing—or clawhammer—banjo-style tunes and one day he brought it to me, put it in my hands and said, ‘Son, I want you to learn to play this thing real well. It might help you get through the world’”.

As we now know, the banjo helped Watson “get through the world” and then some, while it also helped bluegrass make its way in the world alongside him. Oddly, the equally charming story Watson told Gross about his first guitar isn’t covered in the voluminous, 88-page liner notes written by academic and Watson scholar Ted Olson.

Suffice it to say, though, Life’s Work amply demonstrates why Watson’s fretwork on both the banjo and guitar propelled him to iconic status. With 101 tracks spanning six decades, listeners get a sense for Watson’s prodigious chops by the fourth song, a recording of ‘Rambling Hobo’ that originally appeared on an expanded 1990 reissue of his seminal 1963 Smithsonian Folkways album The Watson Family.

The inclusion on Life’s Work of field-recorded material from The Watson Family period is crucial to the overall story arc, because Ralph Rinzler, one of the people who recorded The Watson Family, is widely recognized for “discovering” the man himself.

More importantly, Rinzler was the one who convinced Watson, who had incorporated electric guitar by then, to switch to a stripped-down acoustic set-up and take his act to New York City. It was those initial appearances in Greenwich Village in ‘62 and ‘63 that led to Watson’s signing with the Vanguard label, placing him squarely in the “folk revival” movement taking off at the time.

Watson had played New York as part of Clarence Ashley’s band prior, but made his first “solo” appearance there alongside his father-in-law, fiddler Gaither Carlton, a performance that finally saw the light of day when Smithsonian Folkways released a recording of the show last year, titled Doc Watson & Gaither Carlton.

Recorded by Peter Siegel (who had also helped record The Watson Family), none of the material from the Doc Watson & Gaither Carlton set appears on Life’s Work, but it provides some helpful counterpoint and context for what we hear on this collection.

As Siegel explained in 2020, Watson’s proficiency on the guitar sharpened after that first New York stop in 1962. By the time he returned in ‘63, his playing had grown considerably more flashy.

Naturally, then, much of Life’s Work showcases the virtuosic style that Watson came to be known for. By Siegel’s account, Watson blew away folk musicians and fans who were used to the guitar serving a subordinate role to vocals and lyrics.

In truth, Watson fell much closer to the modern gunslinger-type rock guitarist than to the stereotype of a hushed singer-songwriter, daintily strumming away on an acoustic in a coffeehouse. Watson’s assertiveness, along with his trademark fingerpicking and flat-picking techniques, had a profound impression on the likes of Ry Cooder, Stephen Stills, Joan Baez, Jerry Garcia, Clarence White of The Byrds, Tony Rice and, more recently, Billy Strings.

While disc 1 of Life’s Work leans more heavily towards quaint, dusty-sounding recordings of functional guitar and banjo work, it also features fretboard burners like ‘St. James Hospital’ and ‘Country Blues,’ which will have listeners doing a double-take in disbelief that there’s only one person playing.

Like Leo Kottke immediately after him, Watson had a gift for playing both rhythm and melody at the same time. We also get some indication that he was aware of his own technical prowess—or at least his own uniqueness as a player.

At one point, during a career-defining set at the 1963 Newport Folk Festival, he introduces a song by saying: “I’ll do a tune here that I call ‘Tickling the Strings’. It’s partly my own style of flat-picking. Nobody showed me how to do it—I just picked it up”.

The stakes get even higher towards the end of the first disc, when Watson’s longstanding musical partnership with his late son Merle takes the spotlight.

Merle, who by his father’s own account was an even more naturally gifted player, raises the level of musicianship to such a degree that it’s thrilling to listen to the pair weave in and out of each other’s way, as they create a dense spool of notes across an interlocking web of rhythms.

Fittingly, Merle (for whom the annual festival MerleFest is named) appears on roughly a disc and a half’s worth of the music in this set.

Watson was initially surprised that city-dwelling fans of folk music took so well to his music, but it’s easy to see why when listening to Life’s Work. According to Siegel, Watson’s gregariousness, his willingness to both encourage younger players and learn from them, as well as his openness to covering popular tunes of the day and embracing different genres, all contributed to his popularity.

Across all four discs, collaborations with Alison Krauss, Ricky Skaggs, Chet Atkins and Bill Monroe give us a sense of how readily and easily Watson connected with other musicians. Right off the bat, Watson shows his range as he moves effortlessly from barebones traditional roots music to more manicured and fleshed-out expressions of blues and a capella gospel.

Later, Watson rides the fence between blues and country on ‘That’s All’, while it’s easy to imagine ‘Match Box Blues’ as a lost sibling or distant cousin of the Grateful Dead’s ‘Truckin.’

It makes sense that these styles had currency with young, urbane audiences in the midst of a trend, but as the ‘70s approached and the folk wave receded, he began to align with rising tides rising in country music.

Listeners looking for more of that twang flavor, however, will face the same issue as all listeners who sit down with this set, which is that it never dwells on the same style, mood or tone for very long.

This has its appeal, particularly for fans of recording who are more inclined to focus on subtle differences in production values. If, however, you already own your fair share of Watson’s catalog, you should know that Life’s Work includes just one previously unreleased track, a somewhat ear-piercing 1941 recording of Roy Acuff’s ‘The Precious Jewel’ that functions mostly as a historical artefact, especially in comparison to the pleasant timbre of the other songs.

Hardcore aficionados might be more inclined to explore Doc Watson & Gaither Carlton or (for those with a bigger appetite) the seven-disc 2017 box set Doc & Merle Watson: Never The Same Way Once—Live at the Boarding House, May 1974.

That said, in terms of sheer volume, there’s no denying the value here. Watson, who was still living in Deep Gap when he passed away in 2012, left behind a priceless body of work. Though we might say his influence has been incalculable, he himself was the embodiment of a cultural milieu adapting to its surroundings.

Many of the selections on this box set beckon from a past that’s impossible to recreate, no matter how much vintage gear one might use in an attempt to do so.

So, if your old records are scratchy and worn, and if you’re okay with a bumpy flow that’s essentially the equivalent of playing an artist’s discography on the “shuffle” setting, then Life’s Work contains more than enough to sink your teeth into.

Life’s Work: A Retrospective is out Friday, Nov. 12th via Craft Recordings. You can pre-order the set from one of our selected partners below: 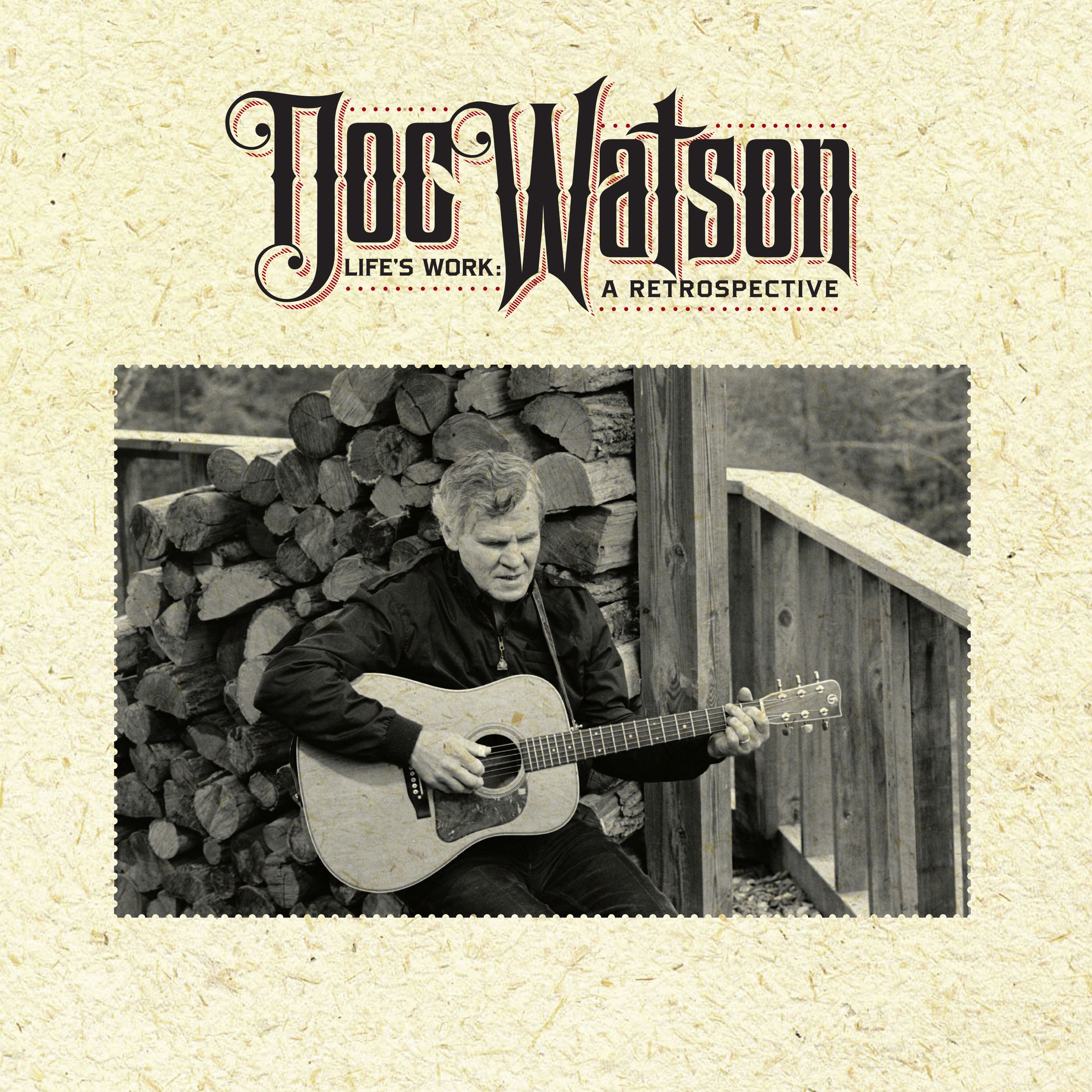