Man, I Feel Like A Loser: The Decade-Long Wait for a Female Entertainer of the Year

medSo, the wait goes on.

I was so convinced that a real turning point was about to take place; that a woman would, after a long and arduous journey of a decade, once again take home the CMA Award for Entertainer of the year.

All week, I’d been thinking, “It’s about damn time for a woman to take that trophy home”. As if by thinking I could somehow manifest it. I have a feeling plenty of other women echoed that same sentiment, pining hard for it to happen.

But on Wednesday night (Nov. 10), at the very end of the CMA Awards show that aired live from Nashville, I got a heaping dose of the hard, cold bitter truth. Luke Combs winning Entertainer of The Year is a tough pill to swallow after being so sure (and so vocal) that things were on the verge of change.

I thoroughly understand that there are long-standing gender inequities all over the music business, both in and out of the country genre.

Women have been, as a misogynistic radio consultant put it in 2015, merely the tomato garnish in the man salad of country music. But this was the year that I felt, with my whole heart, that things were bound to change.

Surely, the 6,000 voters that make up the Country Music Association would honor Miranda Lambert or Carrie Underwood – the only two female nominees in the category this year and in years past – purely because it was their time to be rewarded.

Before I get into this year’s melee, let’s take a trip down memory lane - one that is paved with men, men, and more men - to get a sense of the history of the award. 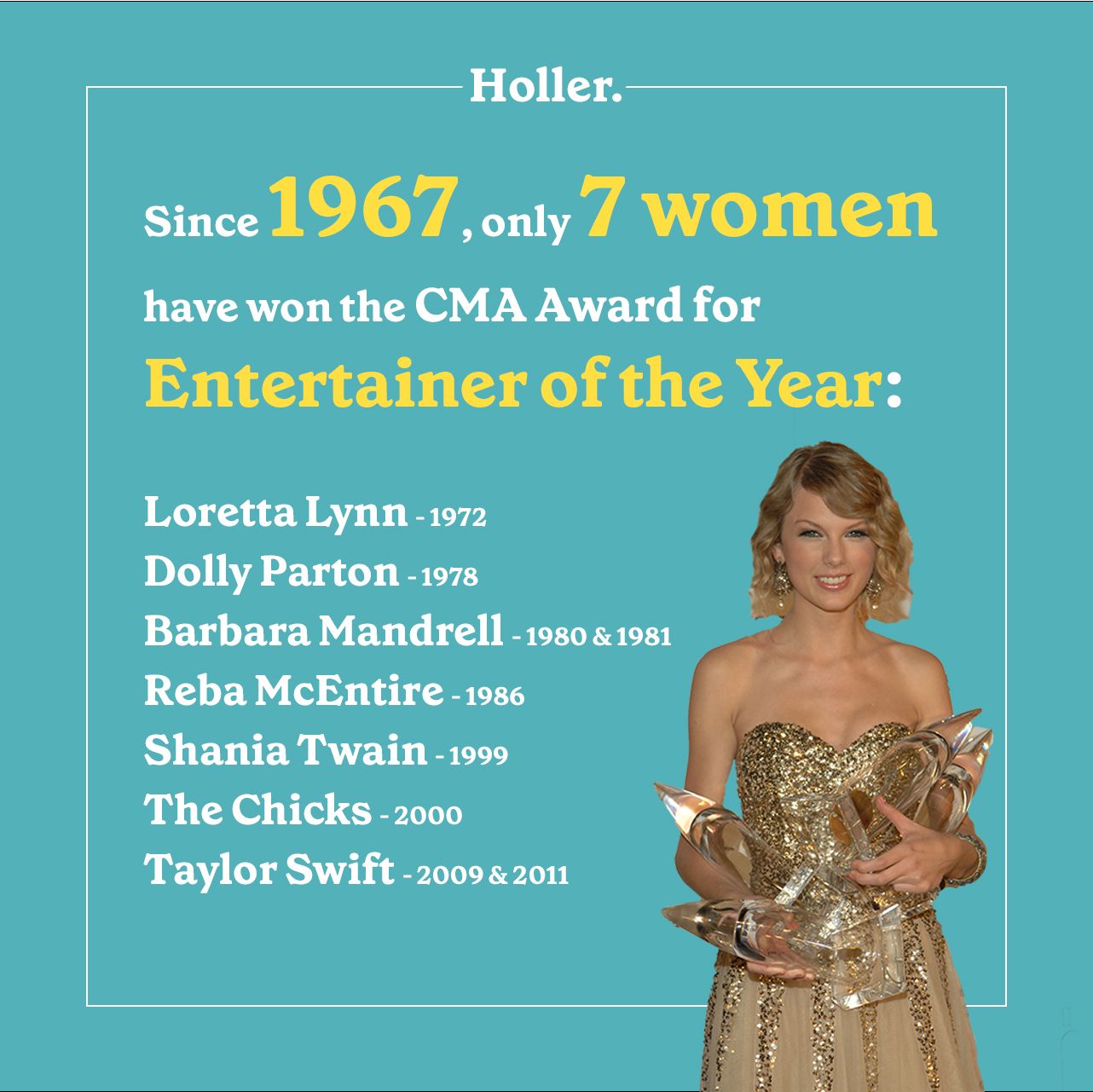 The CMA Award for entertainer of the year is the CMA Award. It’s the one title that has country hopefuls practicing their acceptance speeches in their bedroom mirrors, and it’s coveted for a reason. It’s the award that tells the world that you are not just a singer and entertainer, but you were a champion for the entire genre in that given year.

Since 1967, that could describe at least 100 female country artists. Yet only seven women have taken the trophy home in the 55 years since it was created. Seven. In 55 years.

That is just a literal handful of female winners in the show’s five-decade history. Even in the highly regarded era of 90s music, when women were reigning on stage and on radio, that still wasn’t enough to earn them the grand prize of the night.

When Twain won it in 1999, it probably left all the women who’d come before her question what could have been: Faith Hill, Martina McBride, Wynonna Judd, Patty Loveless, Jo Dee Messina, Deana Carter, Trisha Yearwood, the list goes on. 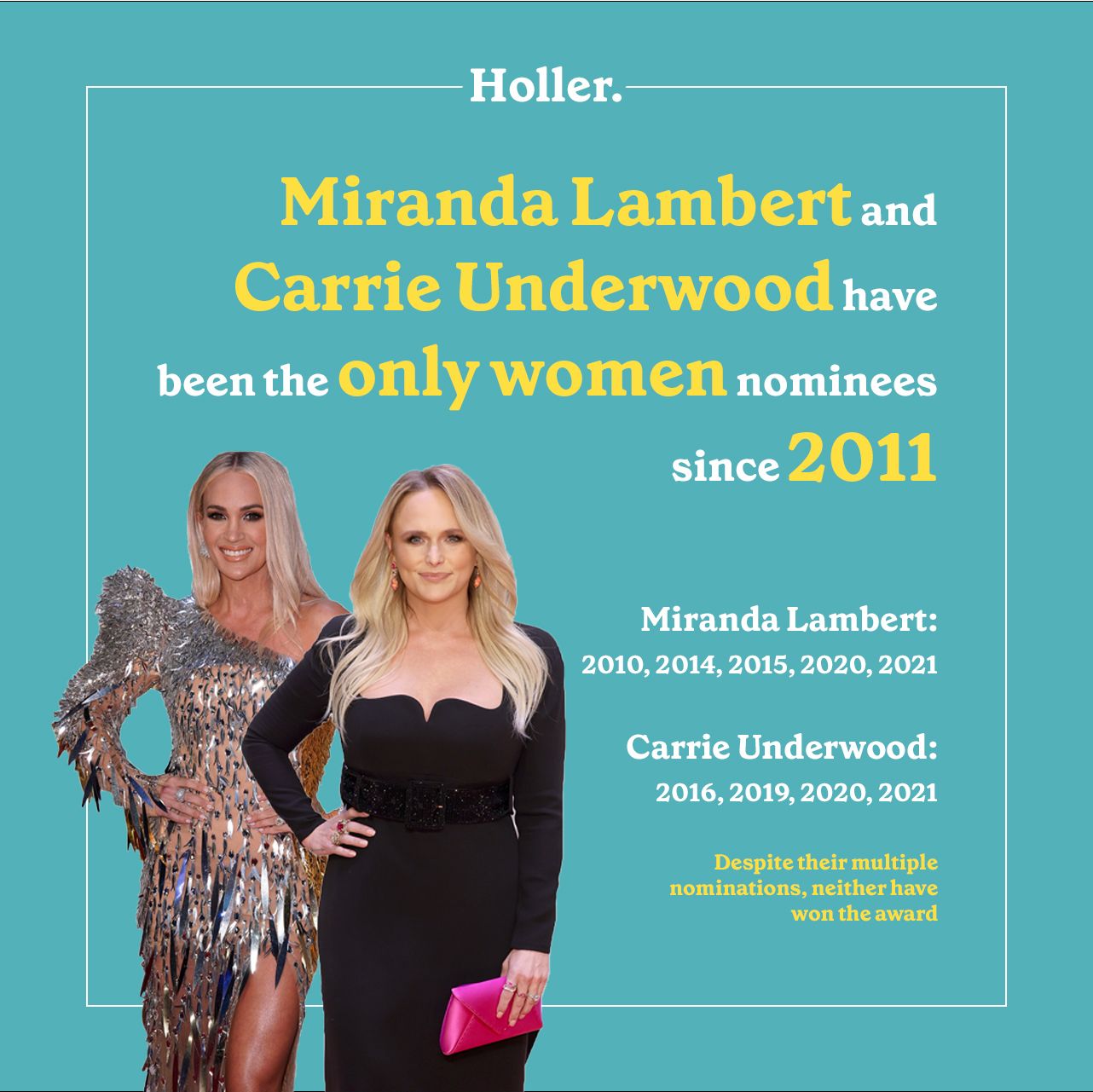 So what exactly is it about this one award that makes it so elusive for women who seem to be doing everything else right?

The official word from the CMA is that this one goes to “the act displaying the greatest competence in all aspects of the entertainment field.” The voting guidelines ask that voters think outside the box.

So, it’s not just an award for the music the artist recorded and/or performed - it would be particularly hard to say who has done that well in the middle of a pandemic - but it’s also the award that considers the artist’s public acceptance, leadership and overall contribution to the genre.

This year’s competition was admittedly stiff; Lambert, Underwood, Eric Church, Chris Stapleton and Luke Combs all vying for the crown.

But let’s take Lambert as a case in point – is releasing an album of the year contender in The Marfa Tapes and celebrating the return of live music after 18 months with an absolutely rapturous wave of sold-out shows at Billy Bob’s Texas not enough to be worthy?

Ultimately, Combs was named the 2021 winner. He unquestionably deserves it, but did he deserve it yet? His rising stature in the genre is unquestionable, but in a year where Lambert has been so particularly prominent, was there not something to be said for her finally taking the crown?

As I’ve tried rather unsuccessfully to unearth the true reason why men keep winning this award year after year, the devil on my shoulder tells me that it’s likely because the CMA is just another good ol’ boys club.

But I know that that’s not the case at all.

“Nashville is a town packed with powerful, badass females at every rung on the career ladder”

There are roughly 6,000 members of the Country Music Association, and only individuals who have a legitimate purpose and presence in the country music industry, and a full-time job in the business, are allowed to vote.

While we may never know the exact gender breakdown of the CMA members, Nashville is a town packed with powerful, badass females at every rung on the career ladder. Not just the artists, but the ones working behind the scenes.

There are 17 professions where you can be considered for CMA membership, ranging from artists, musicians, songwriters and producers to managers, journalists, promoters and venue owners.

In other words, women are everywhere in country music, particularly within the CMA.

Just, you know, not on stage when the CMA entertainer of the year is crowned.

It still simply begs the question, why?