Delving deeper into the stories most important to him, Devin Dawson’s latest offering, The Pink Slip EP, shows a new side to his personality and artistry. Whilst he ventures on in fresh directions from the sound of 2018’s Dark Horse, Dawson ensures to affirm what we already know - that he’s a brilliant, versatile songwriter.

The sense of anticipation surrounding this record, from fans and peers alike, stems from Dawson’s creative unpredictability. But, though his music is constantly evolving, Dawson himself remains true to who he is and what he stands for. “I think I’m recognized for my voice and lyricism. My sonic identity can change from song to song, and though that’s quite different [in country music], I feel I have the licence to do that because I’ve done it from the beginning. I think my fans expect the unexpected from me”.

The EP’s more uplifting spirit is largely down to the life changes Dawson has experienced in the years since Dark Horse was released; getting married and attracting continued success both as an artist and songwriter. The six tracks drive through the usual themes of love, family (and, of course, trucks), lyrically exploring the concepts with considered emotional depth yet retaining a feel-good vibe throughout.

Devin talked us through the EP track by track, discussing the creative process behind what he and his fellow co-writers were trying to achieve. These are the stories behind The Pink Slip EP. 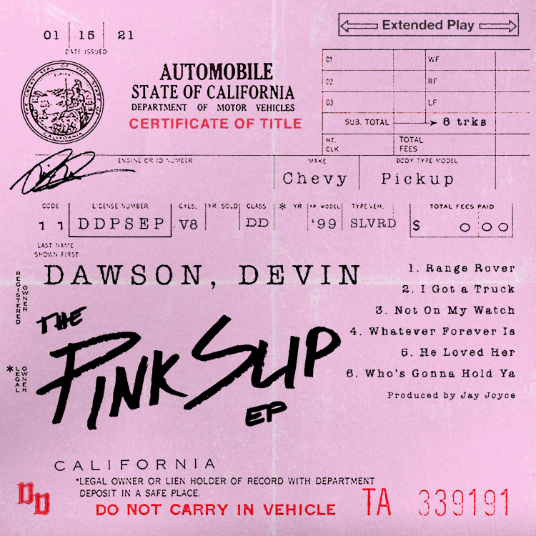 “I wrote Range Rover with Ben Rector and Mark Trussell, who wrote a few songs on my last album too. I really liked Ben’s music, and reached a point where I said to my publisher, “Get me in a room with Ben Rector”. Three or four years ago I wouldn’t have had anything to say for myself - I wouldn’t have had the accomplishments - but now I have them I wanted to flex them a little bit, and so I chased him down. We wrote a bunch of songs together, probably about eight, some for my record and some for his. Ben is just as excited as I am to go somewhere he’s never been musically - we want to redefine the boundaries, and to write a song like Range Rover you have to be comfortable with that.

Mark was starting to get a couple songs on the radio and he said, “I think I’m going to have to buy my wife a car”. We asked him what car she’d like and Mark said a Range Rover. We didn’t think she was the kind of girl to drive a Range Rover, the stereotypical car that more of a trophy wife would want, and we looked around and thought, “Is that a song?”. The song isn’t about putting the girl he’s with down, but instead the singer is realizing that their long-term goals aren’t aligned. She’s looking for the Range Rover and he’s in an old truck with the windows down! It’s supposed to be country’s version of Kanye’s ‘Gold Digger’.”

I Got A Truck”

“I wrote ‘I Got a Truck’ by myself which is unusual in Nashville. I love co-writing, but it can become very routined - you get in a room and write from 11 to 3, record the demo and then do it all again the next day. I don’t think every song should be written like that. This idea came from a conversation I had with Tim McGraw the first night of our tour when we were both backstage. He started giving me some advice; the superstar to the new kid on the block. He told me about his start in Nashville, that he had good songs and a good following, but was having a hard time finding someone to sign him. There was a man called Brian Williams, he was a banker who was known for giving chances to artists that nobody wanted to take a chance on yet. Tim went to him with his songs and said, “This is what I’ve got. I have a fanbase and I’ve got this terrible truck I can trade you - if you get me to the next step, I’ll repay you.” I’m listening to this story thinking, “Keep talking, this is a song!”

It’s traditional in country music that on the last night of a tour you give presents, but what do you buy Tim McGraw? The dude has an island! So I gave him this song as a thank you for inspiring me, and he started crying! In a perfect world I think I’d want him to record it, but it was a great song for me to put out.”

Not On My Watch”

“It’s a track to the devil on your shoulder, that voice that tells you to give up and that you’re not good enough. It’s saying, “just when you think I’m down for the count, I’ll come back stronger”. On the Dark Horse tour, we had such a successful opening but towards the end I was exhausted. Three or four years of touring is great, but I was exhausted. I think ‘Not On My Watch’ was inspired by the thoughts that were there at the end of that cycle. I had this image in my head of a clock or pocket watch, and instead of numbers it would have all the things that I used to say to myself – “Give up”, “Back Down”, “Fall in, fall out”, “Move on” - 12 things to replace the 12 numbers. It’s a double entendre. We planned on recording more than six songs, but with Covid it just wasn’t possible. Some of the songs that were supposed to be on this record might have given ‘Not On My Watch’ a little more context.”

“‘Whatever Forever Is’ tricks listeners into a what feels like a wedding song, without doing the 6/8 ballad thing. I wrote it with Laura Veltz and Jordan Reynolds, who are both massive-hit songwriters. Laura and I had written a couple weeks prior to this session and had an idea that wasn’t quite there yet. We were talking about the concept of ‘forever’, and how no one really knows what forever means. We’d taken those few weeks to think about it, and I’d fallen in love with how big the concept was. We all throw that word around and we’ve probably watered it down slightly, we don’t think about what it means. When I try to take a huge idea, I usually put it in the scope of relationships, because everyone relates to that. So it’s a cynic’s love song - a guy who says, “We all say forever, but we don’t know what it means. But when I saw you I finally understood”. It’s ‘forever’ wrapped up in a love song."

“I wrote ‘He Loved Her’ with Jordan Reynolds and Nicole Galyon. It started out as a darker idea, like what would I write on my tombstone? The co-writers liked it but thought it might be a little morbid, so we had to think about how we could brighten it up a little bit. They asked me what three words I would write and I said, “He loved her”. The best thing about the song is that I got to show it to my Grandpa and have him in the video, and it wasn’t an ‘in memory of’ - it was an ‘inspired by’”.

Who's Gonna Hold Ya?”

“I was having a conversation with my father in law and he was sort of challenging me. He said he was really proud of me and the platform that I have, but wanted to make sure that I didn’t put every bit of my identity into being a writer and artist; he wanted to make sure that I was still me. He was saying that otherwise, if one day all of that is gone, then you can lose yourself. He was encouraging me to think bigger, beyond today. I liked the idea and I wanted to put it into the scope of a love song. “When all this is gone, who’s gonna hold ya?” It asks all these questions, but it also invokes the answer. It’s a similar theme to ‘All On Me’”.

The Pink Slip EP is out now via Warner Music Nashville