For 95 years, since the Grand Ole Opry began airing as a radio broadcast on Nashville’s WSM-AM in 1925, the popular country music show has been an embodiment of the ethos “The Show Must Go On”. Even as the COVID-19 pandemic forced many other live music events to pause, the Opry found a way to continue its weekly show - and on October 30, 2021, will celebrate its 5,000th Saturday night broadcast.

On March 21, 2020, Vince Gill, Marty Stuart and Brad Paisley took to the stage at the Opry, sitting on stools spaced six feet apart, performing for camera crews and nearly 4,400 empty seats in the Opry House. Only the week prior, the Opry House had been closed to in-house audiences and the Opry broadcast abbreviated its Saturday show to a one-hour program.

Speaking to Holler, Stuart recalls the moment he and Gill walked onto the Opry stage, hearing the silence and seeing the rows and rows of empty seats. “The first thing I think Vince and I thought was, ‘This is just the way it used to be - playing to nobody. This is not a stretch,’” he says with a hearty laugh.

“Once you get past that, the thing that I tuned into was that it's a radio show, it's theater of the mind. Even though there's a television camera, it was still designed as a radio broadcast, and a lot of times they do not have audiences. I just imagined people riding in their cars or sitting in their homes, listening - it's what the show was designed to do. I knew that it was an important moment for the three of us to be there and to let everybody know that, “Hey, we're still here. We're going to get through this thing a song at a time, a Saturday night at a time” - and that's kind of what happened.” 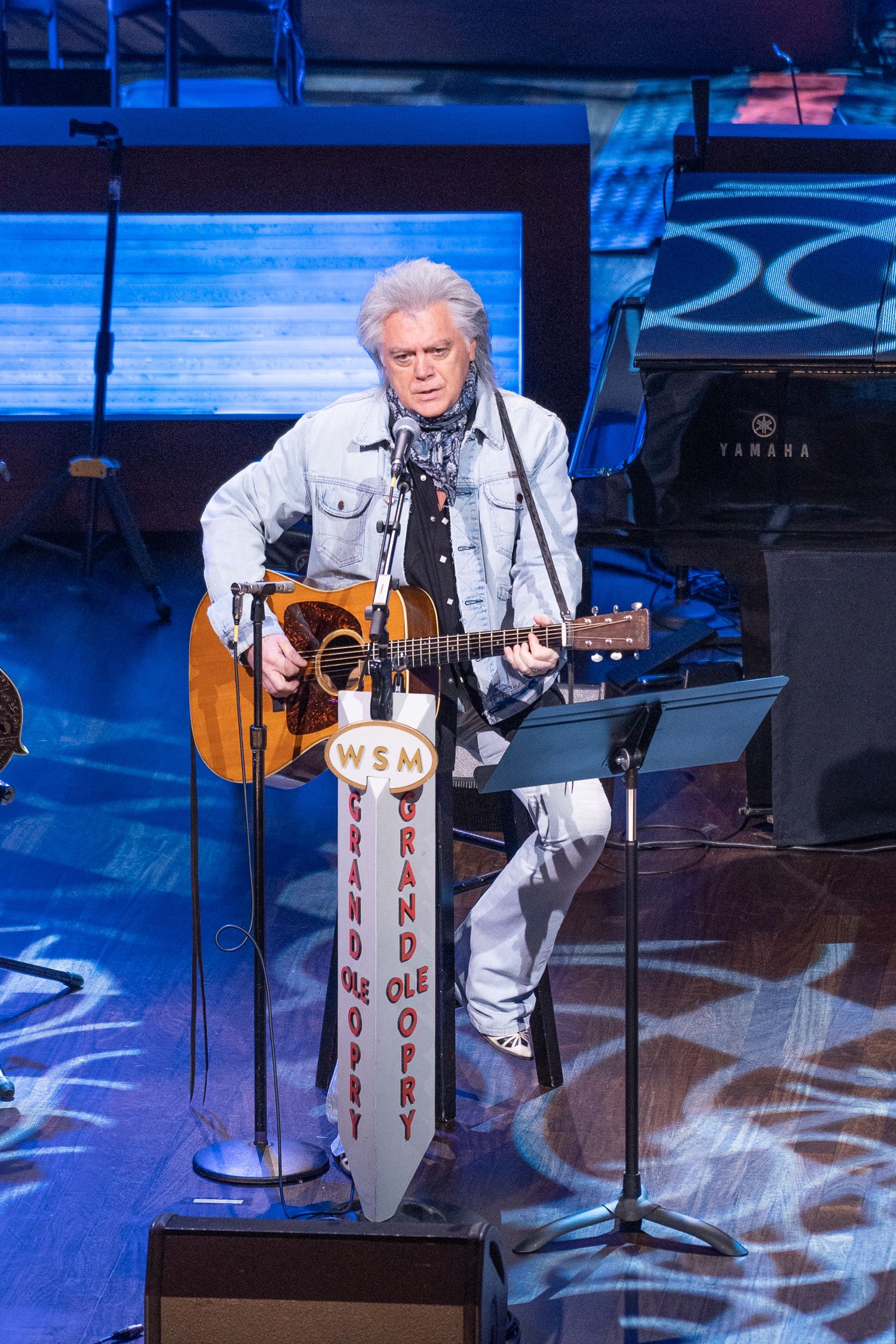 “What was cool for me is that it harkened back to its beginning,” Gill told Holler. “Because when it first started, it was just fiddler Jimmy Thompson in a motel room in downtown Nashville. It was important that we not lose that streak. It's a pretty powerful legacy to have been on [air] straight since 1925.”

Last year, through 29 weeks with no in-house audience, more than 60 artists kept the thread of Opry performances unbroken. Though they performed to an empty room, millions tuned in, as the Opry continued to broadcast the Saturday night show via the WSM radio broadcast. The Grand Ole Opry also launched the Opry Live television broadcast, which was viewed by over 50 million people from more than 100 countries during the 29-week period.

Dan Rogers, the executive producer for the Grand Ole Opry and the album, says he was intentional about releasing this on vinyl. “There was something about the timeless factor of vinyl that made me want to go in that direction,” he tells Holler. “I wanted people to be able to hold that jacket, and I wanted to be able to say a little bit about the story of how those songs came to pass, so that if someone pulled that record out of a collection 50 years from now, they could read about this moment in time and then play it”.

Appropriately, the project begins with one of the performances from that March 21 Opry show - Stuart playing a rendition of Jimmie Rodgers’ ‘No Hard Times’.

“They say if you want to know about the future, sometimes you need to look into the history books and to go back to the original blueprint of country music, to the father of country music, Jimmie Rodgers, and/or the Carter family,” Stuart says. “Look at the times in which they lived, which was the dawn of the Great Depression, and Jimmie Rodgers and what was going on in his life, fighting an illness to tuberculosis. I thought, ‘I bet there'll be a song there that reminds everybody that this - in some shape or form - has happened before, and that people did survive and thrive again.’ ‘No Hard Times’ seemed to speak to that moment, and I had Jimmie Rodgers’ guitar. I thought, ‘We're starting a new chapter of life around here, so let's start it with the father of country music's guitar and his song.’”

The project includes a breadth of performers, including Dailey & Vincent with Skaggs on the Bill Monroe classic ‘Uncle Pen’, as well as Paisley and Underwood reprising the Loretta Lynn/Conway Twitty hit ‘Louisiana Woman, Mississippi Man’. Other tracks speak to the spirit of the moment, such as Darius Rucker’s performance of ‘It Won’t Be Like This For Long’, Reba’s rendition of ‘Back to God’, or Trace Adkins’ ‘Tough People Do’. Combs is featured performing his pandemic-inspired ‘Six Feet Apart’.

According to Rogers, most of the unique collaborations and performances during those months in 2020 found their origins in longtime friendships and an unwavering reverence for the history of the Grand Ole Opry. 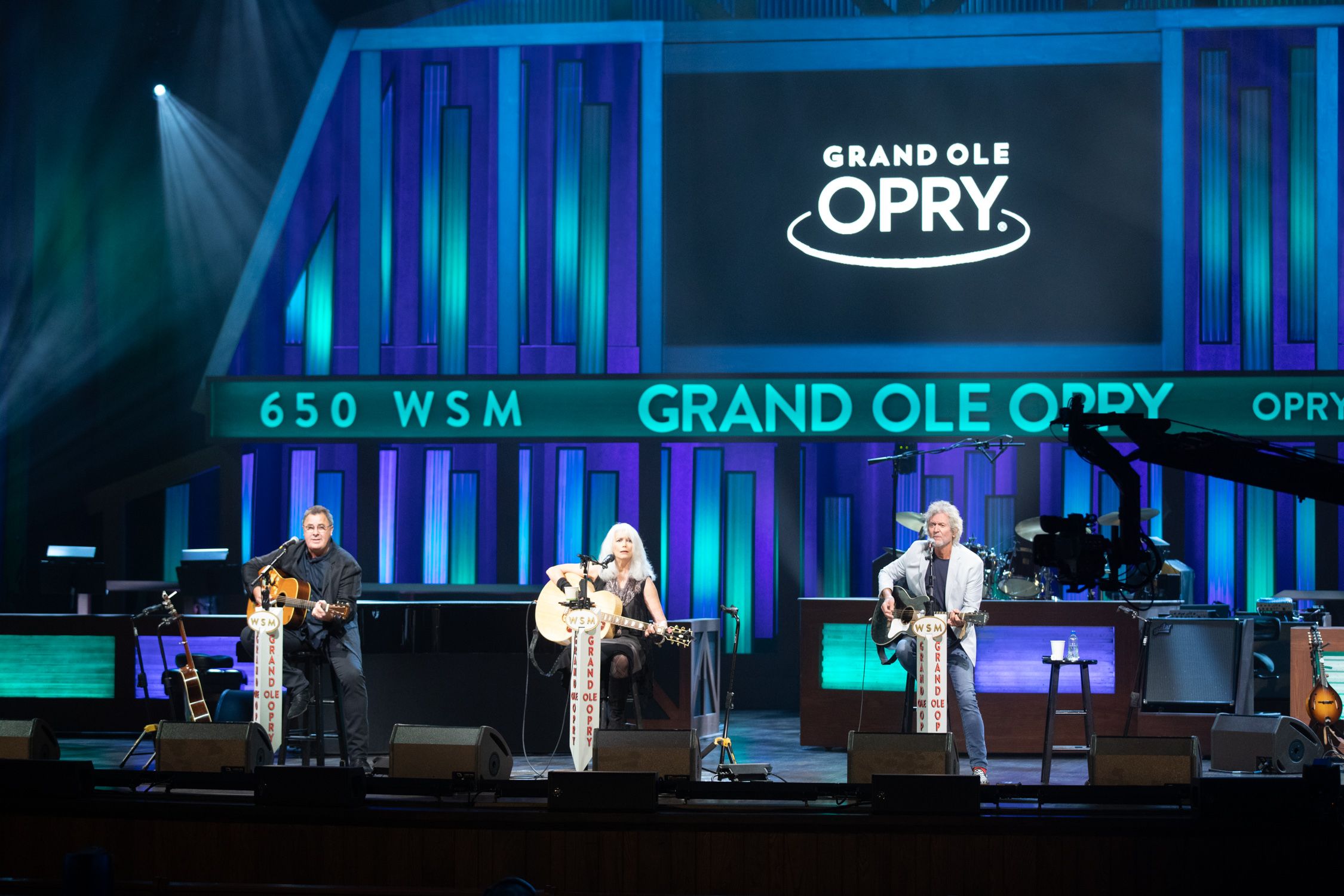 On August 1, 2020, the Opry welcomed Gill, alongside Rodney Crowell and Emmylou Harris. Between the three of them, they have earned 36 Grammy wins and 109 nominations and have collaborated with one another on record and on the road for over four decades. At the show that day, and on the limited-edition vinyl, the trio performed the Crowell-penned ‘Leavin’ Louisiana in the Broad Daylight’.

“The depth of those friendships are just so important to me. When I met them, I was 19.” Gill recalls. “I was playing at the Troubadour in Los Angeles, and they were both there, and we met. I made two great friends that have lasted my lifetime. When you get to look across the stage and see that much of your life lived with and around those people, it's pretty powerful.” 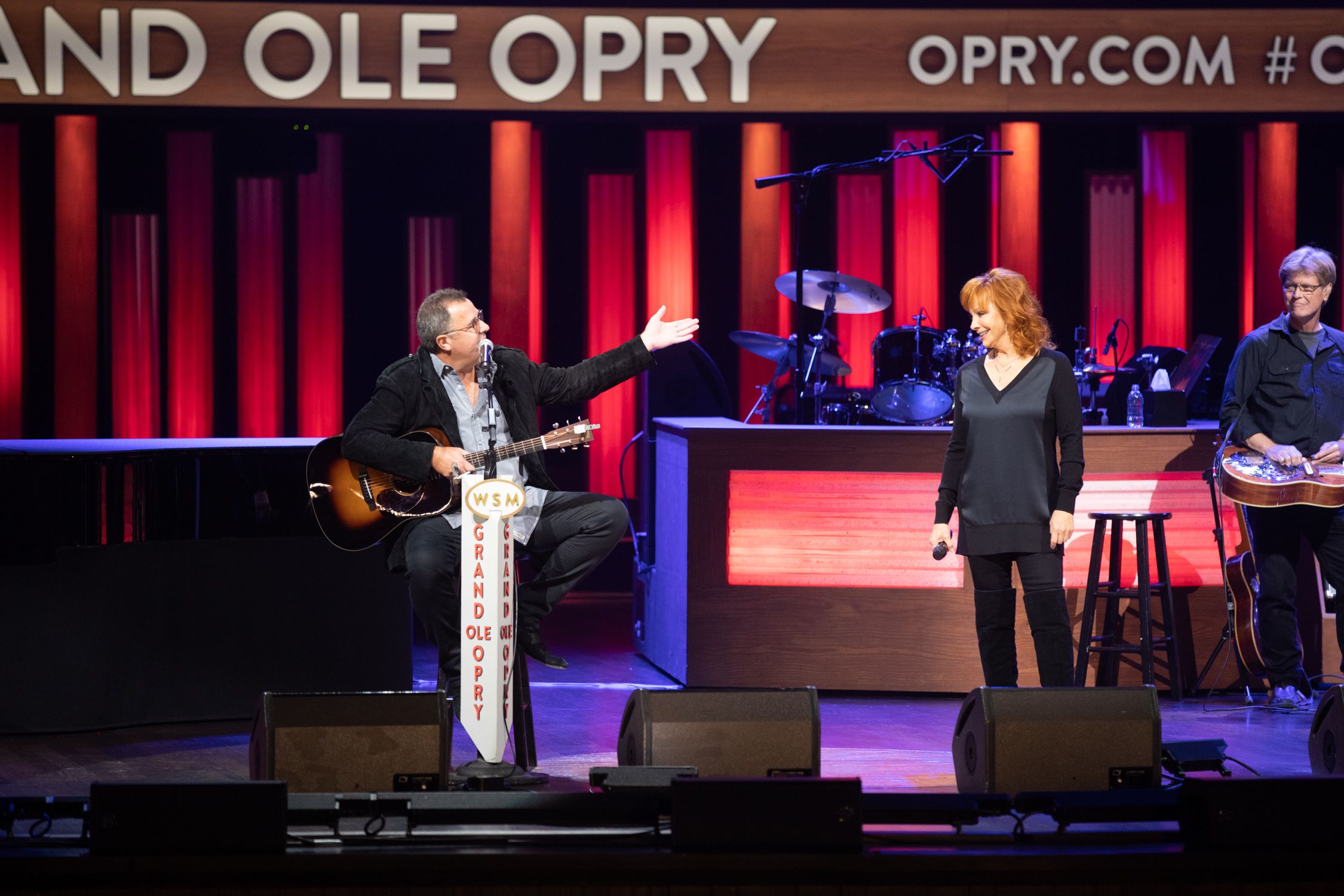 Another sweet reunion was the evening Gill performed with McEntire, trading off renditions of their own hits and collaborating on songs including their 1993 hit ‘The Heart Won’t Lie’.

“Everyone felt like they'd been invited to their little party, to me. It felt like they caught up with each other on stage. They were updating each other on what had happened in their lives, good and bad. It just felt like a really great night of friendship and music on that stage.” Rogers says.

Gill was one of the Opry’s chief performers during this time, performing with his wife Amy Grant and daughters Corrina and Jenny, as well as a show with Terri Clark, Dierks Bentley and Lorrie Morgan.

“Dan or Gina Keltner [with Opry Programming and Artist Relations] would call and say, ‘Hey, can you do this weekend?’, and I would say, ‘Yeah, just call me when you need me. And there were a lot of weekends that they needed me,” Gill says. “You kind of find out who’s got the real deep love for that place. All those performances were different, but were all sweet. It wasn’t so much about performing - it was like seeing neighbors who play some music.”

Appropriately, the album closes with ‘Will The Circle Be Unbroken’, performed by Old Crow Medicine Show with Dom Flemons, Billy Strings and Molly Tuttle. 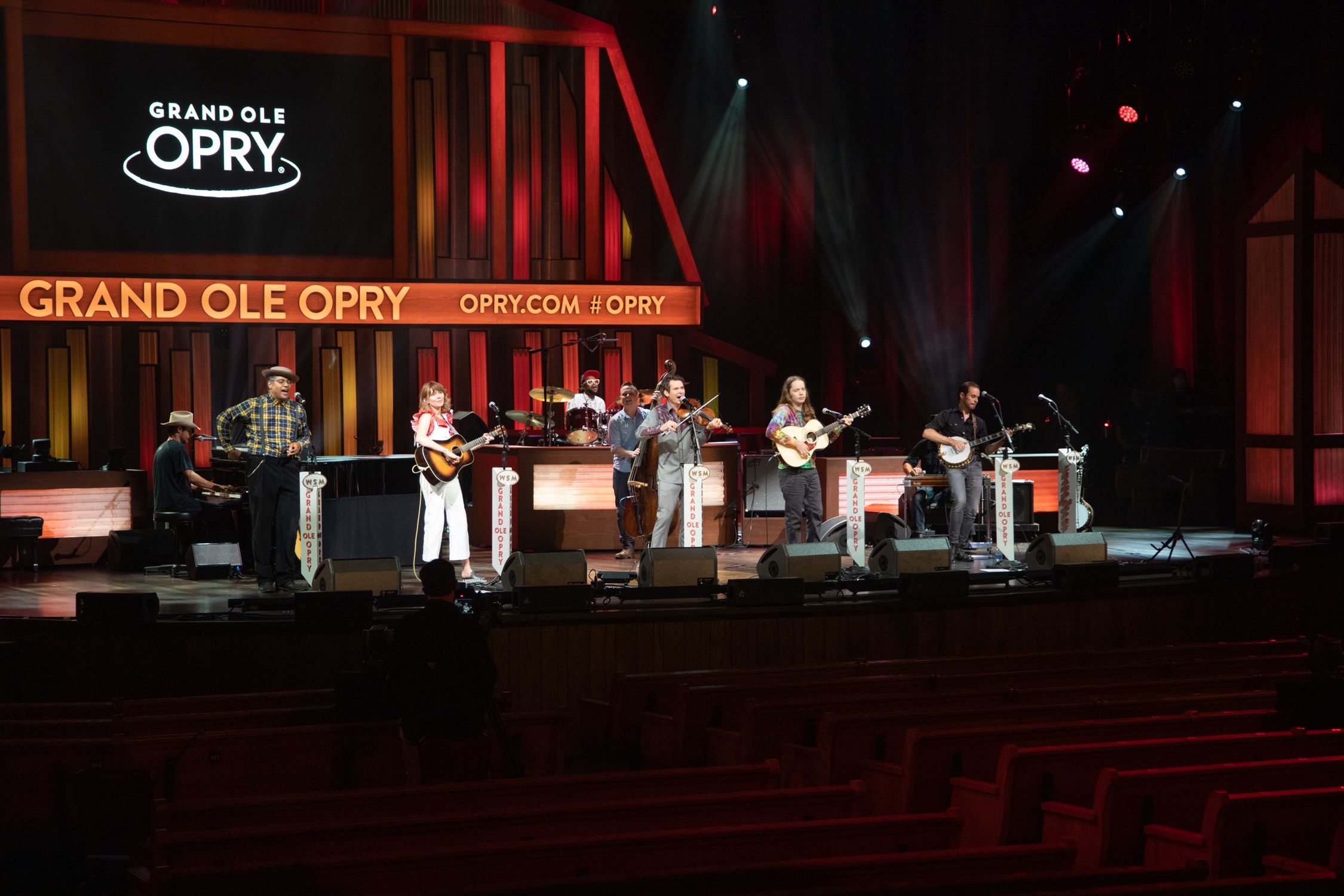 “So we went from just Marty, Vince and Brad, each sitting on a stool, six feet apart playing their guitars at the beginning of the pandemic, to this really full sound at the end of the record,” Rogers says. “And of course, we were by no means near the end of the pandemic at that point. But we were at a place where we had determined how to safely put that many people on stage those few months later and create this bigger sound.

On May 14, 2021, the Opry welcomed its first full-capacity show since March 2020, but the limited edition Unbroken | Empty Room, Full Circle vinyl will provide a reminder of a unique time in the Opry’s history.

Of course, this isn’t the first time the Opry has had to adjust to keep the show going. A mere decade ago, in May 2010, a historic flood tore through Nashville, leaving the Opry stage under several feet of water and forcing the Opry House to close for nearly five months of renovation. After relocating to two of its former homes – the Ryman Auditorium and the War Memorial Auditorium - on September 28, 2010, the Opry made its return to the Grand Ole Opry House, where Stuart joined Paisley, Keith Urban and Steve Wariner as part of the re-opening night performance.

“I think this record is a tribute to the spirit of the Opry,” Stuart says. “It's yet another accolade to show what an indelible kind of a spirit it has. It's almost a hundred years old now, and it has survived through world wars and the changing of venues. The pandemic took so many lives, I don’t think it can be compared to too much of anything. But I just think it’s a reminder that as a human race, if we pull together and do the right thing, we will prevail.”

Unbroken | Empty Room, Full Circle will be available on opry.com and at the Opry’s Nashville-based retail outlets from June 4.