Teddy and the Rough Riders are the sort of band you dream about even before you know they exist. They’re everything you’ve ever loved about US underground rock, country music and fiery 70s rock n roll all mixed up together in one big sizzling hotpot of salvation and fervour.

Like every truly great classic American rock band, they’re capable of sounding like all the bands you’ve ever loved at the same time as sounding like nothing you’ve ever heard before in your life. They don't innovate country rock; they embody it.

Imagine if, when you were 8 years old, your parents decided on Christmas Eve that you didn’t have to wait another day to open all your presents. This is what that would have felt like!

It’s not just us that loves them either. In the words of Margo Price, “Teddy and the Rough Riders are one of my favorite Nashville bands, and, given the chance, they will unite the hippies and the cowboys, the bikers and the stoners with their groovy country songs".

They’ve also just finished a string of dates opening up for Orville Peck on his 2022 Bronco Tour, and Peck himself described them as “one of the best country acts making music today.”

Now, it’s your turn to fall in love with them too - if you haven’t already, that is.

We’re so excited to premiere the highly anticipated new album from Teddy and the Rough Riders - one of our favourite new bands in the world.

Born and raised in Nashville, Teddy and the Rough Riders were brought up on Music City’s country music history. Having made their way up through the DIY rock community, they've playfully bridged the gap between both genres ever since.

In the same way that Gram Parsons, Gene Clark and Michael Nesmith brought the psychedelics and sensibilities of their trippy counter-culture to country in the early 70s, Teddy and the Rough Riders are pulling apart the lost threads of country rock and weaving them back together with their own alternative take on the norm.

Their sound is the next stop on a lineage that runs from Flying Burrito Brothers, The Band and New Riders of the Purple Sage down through Hoyt Axton, JJ Cale and Dough Sahm, before ending up where we are today with bands like Nude Party, Mike and the Moonpies and The Pink Stones - 70s country rock nostalgics with a 21st-century irreverence.

Ryan Jennings and Jack Quiggins, who write the group’s songs, grew up in Nashville’s West End, where the original outlaw movement set up camp during the 70s. These influences and experiences were distilled into songs over many nights, where the two wrote and played covers together over whiskey around seven years ago.

After that, they started playing with Nic Swafford and brought in pedal steel player Luke Schneider – best known for playing with William Tyler and in Margo Price’s band, as well as for the incredible solo record he put out last year on Third Man – to help define their sound.

Since then, the group has released a home-recorded EP and LP, alongside several singles, including a 7” record from Third Man Records. After years of touring, playing bars and recording a prolific back catalog of work, it’s time for everyone who isn’t in on the secret of Teddy and the Rough Riders’ talent to get in the know with the release of this self-titled record.

The project is their first big studio effort with a producer, engineer, session players and with the aim of ramping the whole thing up. The band brought in Margo Price to produce and engineer Jake Davis and rented out Club Roar, spending a few days holed up in the studio to capture the magic of the session. 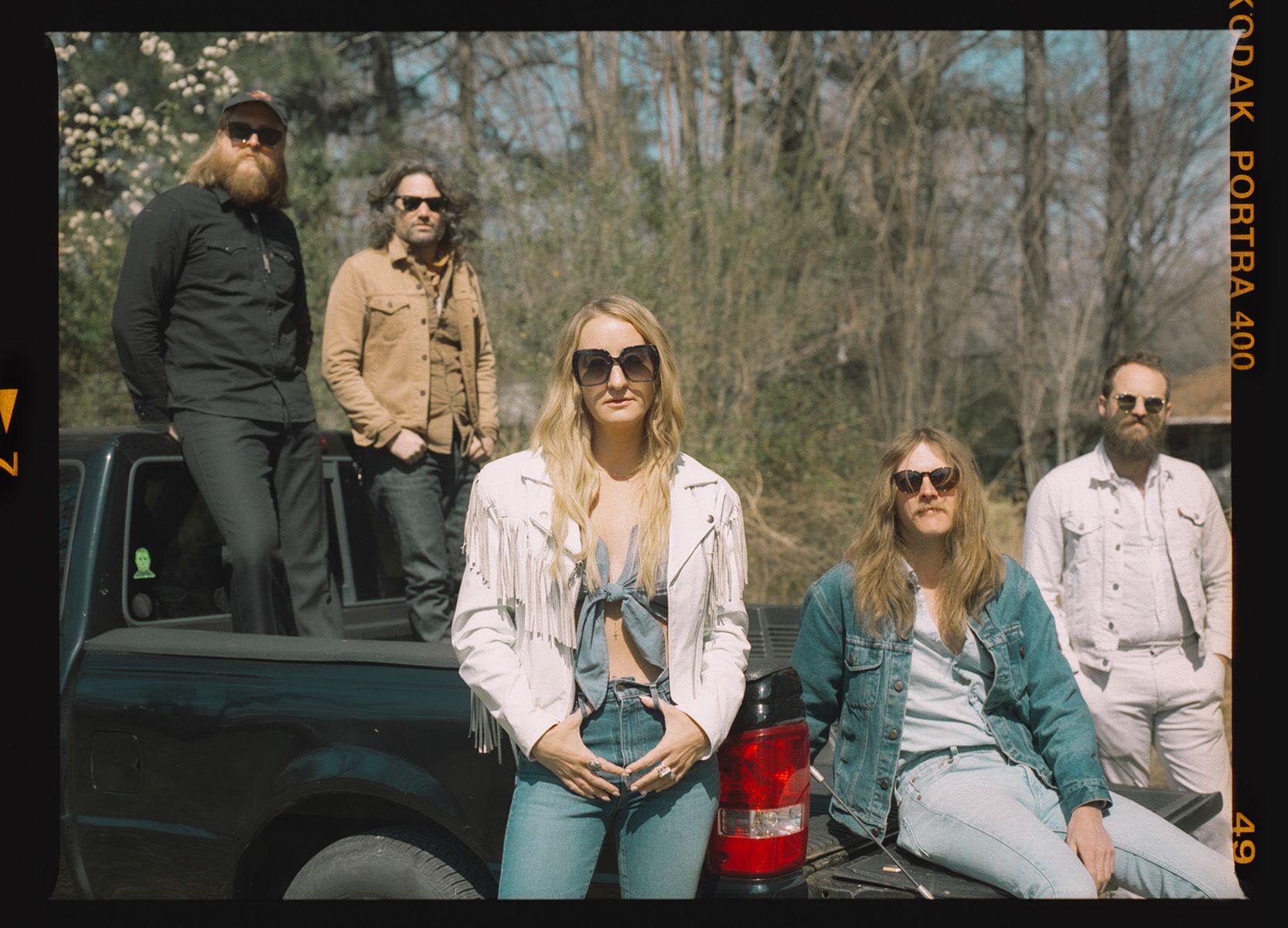 “We ended up living with the purity, and the mistakes, and all the good of that. Some people spend three to six months on albums, and we were like, we have 900 dollars, let’s record these songs in three days”, drummer Nick Swafford recounts.

Margo Price provided backing vocals and percussion on the record as well as producing, while Jeremy Ivey, Luke Schneider, Emily Nenni, Mike Eli and more friends all popped by to play and sing on the songs.

‘Go Lucky Kind’ is “a song about drug use, its consequences in personal relationships, the financial stress of upholding habitual habits, and trying to justify it all” that rattles along like a pub rock band reimagining Commander Cody’s ‘Hot Rod Lincoln’ on mushrooms. ‘Broken Bridges’ and ‘Complacency’ rip into bad politics and the irony of American life, while ‘Dance Floor Blues’ is a swinging country funk two-step with harmonies from Margo Price and Emily Nenni sprinkled on top.

If songs like ‘Rhinestone Salute’ and ‘Bad Spot’ are tongue-in-cheek takes on the tropes of outlaw country, “costume cowboys” and getting stopped by the cops for smoking pot, then ‘Livin’ In The Woods’ is where enough is enough; an escapist end-of-the-world pipedream staged as a glee-filled barroom boogie singalong.

The album ends with ‘Hey Richard,’ a song penned about Little Richard years before his death. It’s an homage to him, Hank Williams and other angelic, enigmatic figures of music history. Jennings’ whispery soft vocals are joined by the voices of everyone else, as the chorus fades with a cosmic promise of a better world.

We sat down with Ryan Jennings to talk about the new record, find out a little bit more about how the band came to be and where they’re headed next.

Who are Teddy and the Rough Riders?

TRR is Ryan Jennings, Jack Quiggins and Nick Swafford at the core. We have the pleasure of playing with some of the best in Nashville as well; Luke Schneider played steel on this record and with us for years. We have had Will Ellis Johnson on steel for a while, there’s Sean Thompson, Josh Halper, and Mike Eli too. There are a lot of Rough Riders, actually.

How would you describe your sound?

I like to call it country rock, because it’s a real blend of so much stuff. That way we can pretend to be George Jones and The Velvet Underground at the same time. We all like to be able to write in a few styles; bluegrass, outlaw, soft singer-songwriter folk, and full-on fuzz rockers.

Where did you record the new album?

We recorded it at this great studio called Club Roar in Nashville, TN. It’s pretty near where we live, so we were very glad we got to spend time in there and explore. It’s coupled with another studio, Alex The Great, but Roar has a great open feeling and a bigger room, with a bed in there.

Can you tell us a bit about what the recording was like?

We'd demoed the songs and had a general idea about instrumentation. Going in, we mainly tried to focus on getting solid live basic tracks - drum, bass, guitar, scratch vocals. We messed around with a lot of amazing guitars they had there. The control room is in the middle of this big room, with baffles around it. It had a great group live feeling. We got to invite a bunch of friends to come and play too. 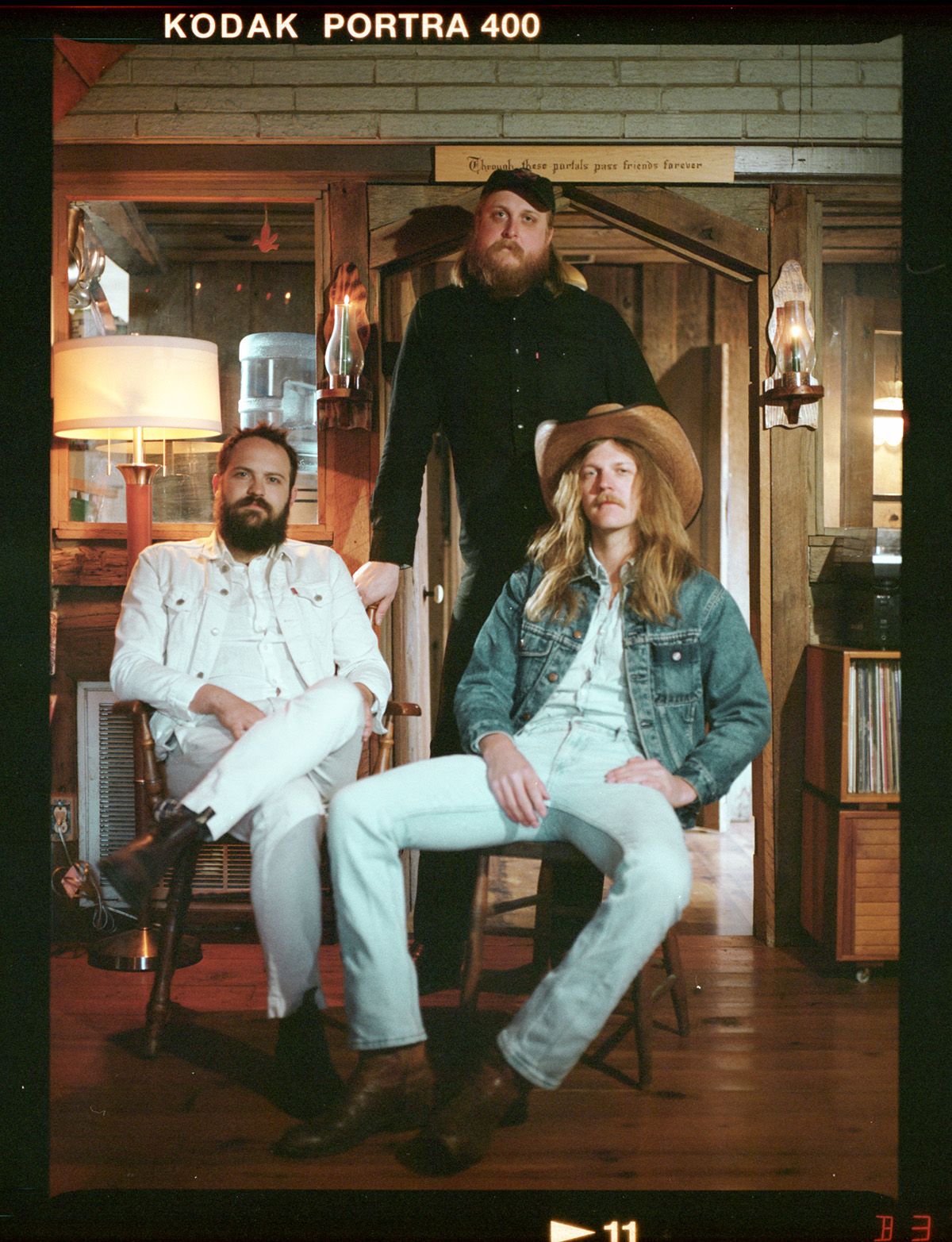 Margo’s a killer friend and working with her was awesome. She was about 7 or 8 months pregnant at the time with her daughter, so she had this great motherly vibe; she gave us a bunch of weed and just watched us smoke it (since she couldn’t) and she’d pop up and sing a bunch.

She was a great vocal coach, she always had good ideas and suggestions. She definitely wanted us to feel natural and get the cool live takes like we wanted. She’s also a master percussionist, she did a lot of the percussion on the record. Luke had played with her for years, so it was cool getting them both back together.

How did you come to put it out on Appalachia Record Co?

Nick began drumming for Loney Hutchins Sr. as ARC put out his records last year. A bunch of friends were playing with Sr., and I even filled in on bass for a show. But Loney Jr. was also big friends with Luke, so we pitched the record to him and became instant friends. We're real glad to be a part of it. Growing up in Nashville we love to find the threads of history.

What’s it been like being on tour with Orville Peck?

Man it was a blast. It really flew by, and it was the first real support tour we’ve ever done. Again, we’re really just close friends with the whole group, and that’s how we came about being asked. I just really trust them all and we have a great connection, I hope to continue; Orville’s got some amazing plans for the future. Orville knew how much getting to play The Ryman meant to all of us; being from Nashville, my whole family came out.

If you all had Spice Girls-style nicknames for each Rough Rider, what would they be?

Teddy and the Rough Riders will be available on CD, vinyl record and all streaming services on Friday 1st July via Appalachia Record Co. Holler is proudly premiering the new album above.

The Songs That Changed My Life: Jeremy Ivey