“I just love turning people onto country”, laughs Jaime Wyatt, the new queen of Outlaw Country, when asked about what motivates her. “I do get a lot of messages from people that don't really listen to country music but they love this record. That’s kind of the goal". LA born but raised in Tacoma, Washington, at the age of 17 she returned to her birthplace to pursue a career in music. But when the record deal she moved there for fell apart, she fell into a spiral of depression and drug abuse - four years later she was in jail for robbing her heroine dealer. She got out and she got clean, but when her marriage failed, her father died and her best friend overdosed, she relapsed again. Her latest album, Neon Cross, is a neo-traditionalist country confessional recorded in LA with Shooter Jennings - covering her grief, heartache, sexuality, depression and addiction.

Now at the age of 35, three years clean and living in Nashville, she approaches her life and music with the straight-up matter-of-factness that only comes from having been there and done that a million times over. She's smart and self-deprecating, with the same sense of humour and self-awareness that she pours into her songs. “I’m not afraid of failure, because I haven’t had a lot to lose” she mentions over the phone on the day before Thanksgiving, as she battles bad reception and barking dogs to talk about making the record, the journey that took her there and what lies beyond. 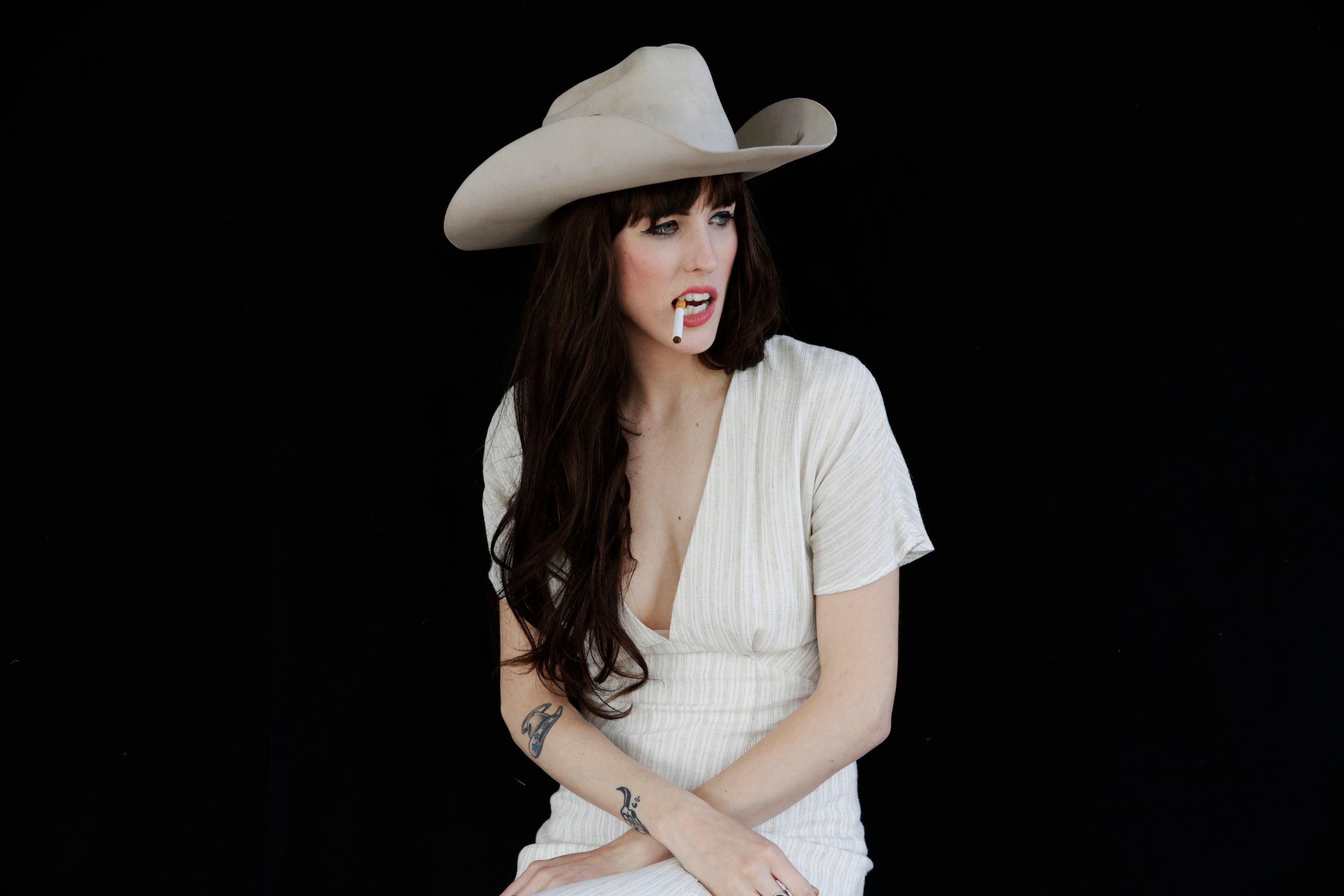 Where did it all start for you in country music?

I grew up just outside Tacoma, Washington - on an island called Fox Island. It's really rural and rainy. My parents were musicians, so I grew up listening to everything - from folk to rock n roll to country, but I definitely dove headfirst into nineties country. That’s something that I still reference very nostalgically. I also grew up on alt-country, listening to Lucinda Williams and Steve Earle, and then in the early, early days of alt-country, it was Whiskeytown and Wilco and Son Volt.

With all those influences in mind - your songs are also so confessional, is writing a cathartic process for you?

Yeah, for sure. I'm sure I'm not unique, however, I will say that as a young person I was really introverted. I built this really big internal world that I didn't express outwardly. So when I write, I actually get to learn more about myself, because I didn't do a lot of that outwardly. It's become sort of key to my self-discovery and my healing process. I can say a lot of songwriters use song writing for healing, but I guess for me, I've used it as a way to really explore emotions. It was almost the only place I did that. So it's definitely been key into my learning how to be a human.

So how did you come to record Neon Cross with Shooter Jennings?

Shooter’s a friend, we've been on tour together quite a bit and I knew all the guys in his band. So, it was just very natural, we all have a really great bond. I felt safe and I felt free, and that was really important at that time, just for me to feel supported.

Obviously Jessi Colter, Shooter’s mom, sings on ‘Just A Woman’ with you as well - how did that come about?

Well, I knew her music already, but I didn’t know her yet. We were looking for someone, kind of older and wiser, someone who would just be like the ultimate female to sing that song. I felt like I had written it from the perspective of Tammy Wynette, so it just dawned on me. I asked Shooter, “let's see if your Mom will do it - do you think she would?” and he said she’d be up for it. He'd been playing my music to her for a couple years. I’ve her met tons of times, but I would always geek out - so I’m kind of glad she recorded it remotely, because I might have lost it.

‘Rattlesnake Girl’ is so honest and empowering - was that a song you’d had for a while?

That was a song that appeared towards the end of my whole process. I’m a pretty late bloomer as far as coming out as gay, and that song was really about my journey in coming to know myself. I’ve trained myself to really not talk about my sexuality very much. So that was kind of a big leap, I think a big part of my growth was to write a song about those things - still poetically coded of course - but to write a song more about my journey.

It's really important for me to acknowledge, do my part and help people realize that this isn’t new.

Is your sexuality something you've found yourself talking about more because of that song and do you find it strange that you now have to talk about it?

I don’t find it strange. Here's the thing, it’s like everybody assumes you're straight. That's just the world that we've all kind of lived in, for a really long time. So it's really important for me to acknowledge, do my part and help people realize that this isn’t new. People have always been gay, they were just trained not to talk about it. I understand if it's uncomfortable for some people, and they would argue, “Oh, we don't talk about straight people’s sexuality”. Which is true, yes, because we've been trained to only talk about loving a man and a woman. The reason we’re even talking about it right now is because it hasn't been talked about enough to make it normal, even now.

So that's why I don't mind talking about it and I feel it's a worthy cause. Personally, I've been assumed to be heterosexual my whole life, especially with my appearance - I have more feminine features. Men are allowed to admire beauty - and I understand that, because I admire the beauty of the female form as well - but it’s important to talk about sexuality, because it hasn’t been in the conversation long enough. It’s been in the conversation for the last ten to twenty years in music, but in country music it feels like it’s still very new.

How has the country music world reacted to it?

Americana has been great. That's a community that embraces people doing alternative country, and I almost feel like because I do talk about my sexuality I'll forever be alternative country, just because my identity is assumed to be “alternative”. In country I've mostly received a lot of love from people who have come off as pretty redneck and traditional. I have received some backlash definitely. Especially after I shared the Advocate article, and people did accuse me of having an agenda, which is so interesting. I just leaned right into it. They asked why my sexuality even mattered when it should be just about the music. But nothing is just about the music anymore because we ruined the record business a long time ago. We're on social media and we're supposed to be actually talking about ourselves, because you have a platform and you're talking to young people. So the whole idea of not talking about it doesn't work. Saying “don't talk about it” is the same as saying “don't do drugs”, but I did drugs, because I was trying not to talk about my feelings or who I am.

Even though I was under the influence, it was one of the few songs I’d written where I really felt like it expressed a lot of grief and regret.

In terms of songs about emotional healing, you wrote ‘By Your Side’ following the deaths of your father and a close friend. How difficult was that to write?

That was the first song I wrote for the record, so I was definitely very much under the influence of drugs and alcohol, and in the full grief mode. Even though I was under the influence, it was one of the few songs I’d written where I really felt like it expressed a lot of grief and regret. I try not to judge myself in my writing. I had a very sordid and untraditional relationship with my father, so saying goodbye to him was very difficult. There were things I was still very upset and angry about, so therefore I didn't really have a “proper goodbye” with him, you know. So writing ‘By Your Side’ took me to a place where I could make amends to myself.

How much are you actually like the character you portray in the title track?

I'm sure I've embellished everything, but I’d definitely say the character in that song is like my angry teenage self. I was kind of looking at that rhetoric within myself as being pretty comical. I was making fun of my own self-pity. I had the self-awareness because I had gotten back into recovery, and now I was looking at it and thinking “I did this all to myself, there's no one else to blame”. So the satire is intentional throughout the record - just because self-pity is just such a classic thing for artists - but I'm really grateful that I know that that's what it is. That's just self-pity. That's just the immature parts of myself, that's who I am when I drink and that's okay, but it's not who I am today.