Lera Lynn is in her living room in Nashville, Tennessee. She sits upright on her chair in a light blue wool jumper, her hair draped around her shoulders, looking completely at ease and her guitar sitting the corner. Sunlight streams through the room, in stark contrast to the winter’s day in Oxfordshire from where I am calling her, curled up in an infinite number of layers as fog descends thick and fast outside my window.

Lynn was born in Texas, raised in Georgia and has been working and living in Nashville for more than ten years. Over the past decade, Lynn has released seven albums and EPs, including her critically acclaimed albums The Avenues and Resistor. She’s also known for playing the shadowy and forlorn bar singer in the second season of True Detective, in addition to co-writing its soundtrack with T-Bone Burnett.

Prior to the pandemic, Lynn release the brilliant record On My Own, which she made entirely on her own. The record is deeply personal, a perfect blend of Lynn’s earlier albums, yet is also very much its own animal. It’s perfect for those long dark nights, as amongst its throbbing bass, moody ambience and poetic lyrics, it’s easy to totally retreat.

During our call, we spoke about all that went in to On My Own, the evasive muse, fathers, and the thing we are all missing right now - warm-blooded human connection.

You made On My Own entirely by yourself. How did that come about? Did you plan to write and record it all alone?

I didn’t have any kind of plan to do this record the way I did, but my partner gave me a Pro Tools Avid Inbox, which is a really basic audio interface that works with Pro Tools. it essentially has four inputs. Anyway, a friend of mine reached out and said he had been struggling with how there’s not as much of a demand for live music anymore. I could tell he was really down, so I started writing ‘It Doesn’t Matter’ as I texted with him, and I ended up thinking it’d be great to record on my new piece of gear. The song actually ended up being pretty interesting, which made want to do another one, and then another one. Before I knew it, I had a handful of songs and I thought if I kept going, I could manage to squeeze a whole record out of them.

You have produced stuff before, including a Misty Boyce album, and you’ve been very hands on with your own records. Did those experiences make it easier in the sense that you were working on the album on your own?

Yeah. I think production is something that comes naturally to me. The real challenge was in the technical aspect of engineering everything by myself and not really knowing the shortcuts in Pro Tools or how to troubleshoot different things. I’ve had some experience with miking techniques, but that was definitely a challenging element, and at times became enough for me to just give up for the day. It can kill the creative flow really quickly.

‘It Doesn’t Matter’ definitely feels like a song to a friend, one to listen to if you want to make yourself feel better.

Well, it doesn’t - none of it matters! We can get so wrapped up in the details and especially in numbers, you know, everything being so valued by streams and views and how many tickets you’ve sold - it’s kind of all we have to go on these days in the music business. I think we can lose perspective really quickly on what’s important, which is not how many tickets you’ve sold.

A really big goal of mine throughout the process was to try to eliminate the outside noise and other voices.

I agree. Because you made the record by yourself, you didn’t really have a sounding board to turn to for feedback on what you were making. How did you deal with overcoming the self-doubt involved in the creative process, or that need for external validation?

I don’t know if I did overcome it. A really big goal of mine throughout the process was to try to eliminate the outside noise and other voices. I think it’s natural for most artists when they’ve written a song and demoed a track, or even just done a full-on production, to sit and listen through other people’s ears. I really tried not to do too much of that because you can get carried away with it and I think it can really debilitate your progress. Even though the record’s done and out now, I’m still kind of like, “Oh, what that good enough?”. I just had to set a hard deadline for myself and try and maintain some sense of structure and really try to focus on the momentum.

You know, if there’s anything I have learned from working on True Detective it’s that you really have to learn to trust your instincts, and the only reason I bring that up is because we did so much writing and tracking in such a short amount of time. In a way it’s kind of a refreshing experience to have a very limited amount of time to work on something because you really are forced to listen to yourself or listen to your instincts. Otherwise, you can sit and nit-pick. For years.

‘Make You OK’ is such a deeply personal song - and for whatever reason always makes me cry!

That’s one of those songs that, for a good bit of it, I would go into the bedroom and start building a loop. I would record myself playing on a piece of metal or something, and a build a little bit of a loop, and then I would play a bassline and start writing melody or lyrics on top of that, and then just keep building the song in that way. ‘Make You OK’ happened in about half an hour, after I’d reached a dead end and cut another song. I remember reading the lyrics I’d written and crying because I felt such a sense of relief. I felt I had finally said something that I hadn’t been able to say before, and that I didn’t necessarily know that I needed to say. I wish they all were that easy.

Is it that, most of the time, you are putting songs together over a period of hours or days, or do a lot of the songs happen in that unexpected, as if there’s magic in the room, kind of way?

Both ‘A Light Comes Through’ and ‘Make You OK’ were like, “Here you go. Here’s a song.” But the rest of them, you know, I kind of slave over.

Does it make a difference? Do you value one more than the other or do you see it as just different?

It’s different. You can’t rely on those ‘gift songs’, because you can never predict them and you have to get the work done. That’s how I used to write. I used to just wait for inspiration to strike and that resulted in a lot fewer songs. I view it as job too, you know? I’m musician, I should make music.

Do you try to write every day?

No, but when I was working on On My Own I would work every day - I had to keep up those hours or I would never get it done. But I have a baby now, and I haven’t written in a while. I think the last time I wrote was when he was two weeks old and I was trying to get him to go to sleep and I came up with a little lullaby. But I do feel the energy shifting back towards creating music again. Having children is a massive energetic drain in the beginning - I heard you can get energy from it too, but I’m not quite there yet!

Becoming a mother has helped me settle into myself even more. I have less fucks to give, as they say, than I did before. It shifts your priority and perspective on reality.

Do you find being mother has changed how you make your art?

I can feel that my energy has shifted away from ‘Music is everything. Everything has to be perfect with the release and my social media presence’ and there’s less energy to worry about all the details. But I also feel like becoming a mother has helped me settle into myself even more. I have less fucks to give, as they say, than I did before. It shifts your priority and perspective on reality. Now the most important thing is keeping this person alive and making sure that they feel safe and loved and that they’re not gonna become a psychopath! 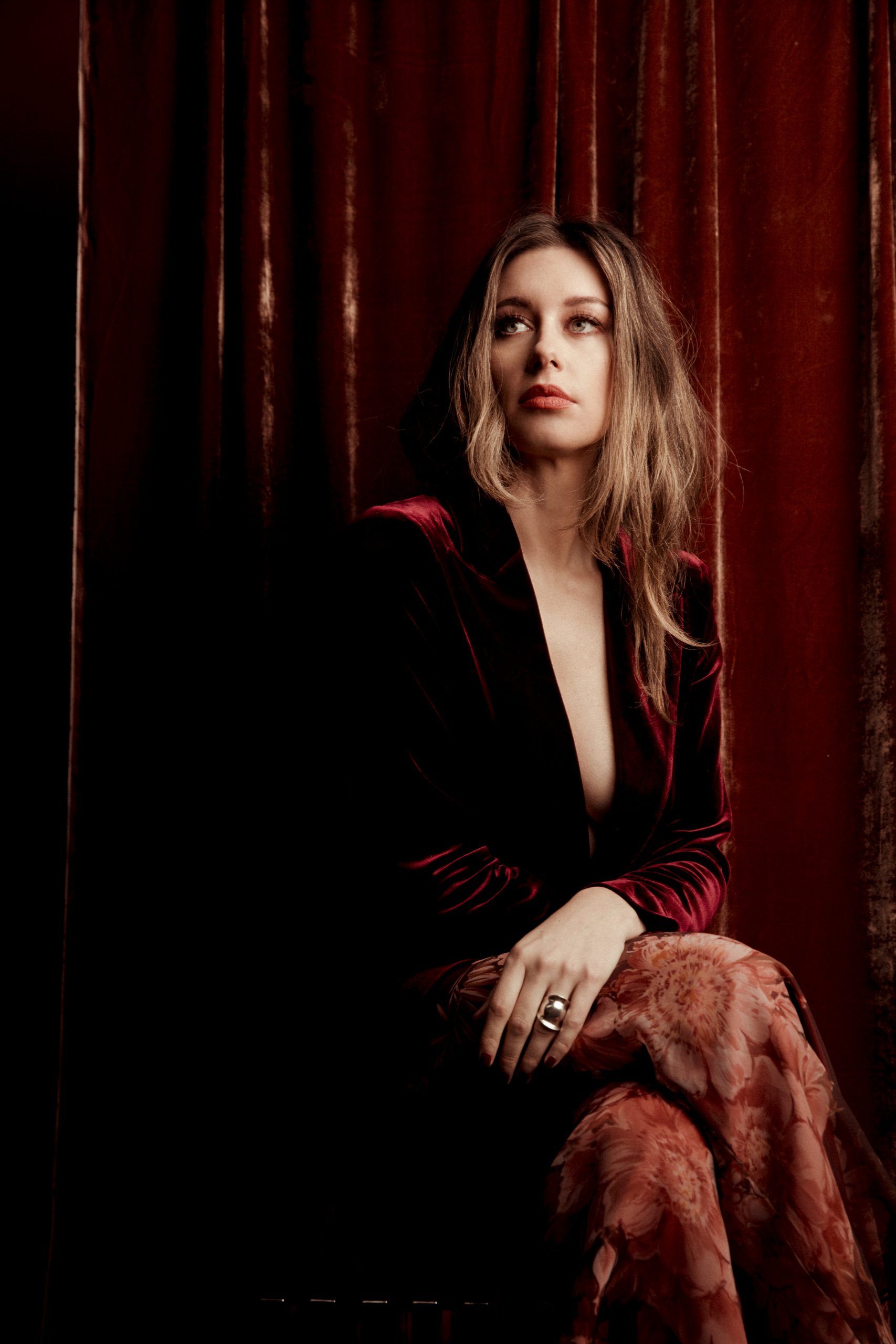 What do you hope people take away from On My Own?

My hope is always that people can connect to an experience of their own and just have a meaningful listening experience. I just want people to feel something when they listen to my music. Feel something real.

You’ve said that on ‘Let Me Tell You Something’ you were taking on your dad’s persona, and I thought that was really interesting, bringing a male energy into a record that is very female, given that you made it fully by yourself.

That is definitely a current, a strong current, through the whole record. I think one of the other things I hope to communicate with this record, is that women are fully capable of making records by themselves. I was discouraged from doing it, even now or before I started working on the record, I was discouraged. I think the best way for women to believe that we can do stuff is to see other women doing it. There’s a lot more women in music since I started – especially in the music business and behind the scenes – who are really dominating and doing great work. I just wanted to be another little voice in that choir saying, “Women can do it, women can do it anything”.