In a career that spans some 60 years, Judy Collins has witnessed the continued rise of modern folk music while remaining as remarkably prolific as ever.

With a discography that numbers well over 40 albums — eight in the past decade alone — she’s currently gearing up for the release of her most revealing effort yet, an album comprised entirely of her own songs.

Not that she still needs to prove her prowess; she was among the first artists to bring attention to such gifted songwriters as Joni Mitchell (‘Both Sides Now’), Randy Newman (‘I Think It’s Going to Rain Today’) and Ian Tyson (‘Someday Soon’), while also sharing the work of Bob Dylan, Eric Andersen, Fred Neil, Leonard Cohen and Stephen Sondheim.

Nevertheless, Collins is more than just an astute artist, interpreter, singer and songwriter. She’s also a tireless activist whose efforts on behalf of UNICEF, curbing gun violence, promoting suicide prevention and speaking on behalf of women and minorities continues at full throttle.

It’s also worth noting that she was one of the first female artists to take center stage without having to helm a backing band; in effect, putting herself solely in the spotlight.

That’s all before we consider the fact that she inspired an iconic composition as well — ‘Suite: Judy Blue Eyes’, written in her honor by her former beau Stephen Stills, for Crosby, Stills and Nash’s eponymous debut.

For someone with such a heralded list of accomplishments, Collins come across as remarkably gracious and down to earth. At age 82, she continues to tour, all the while talking about her current activities with the same zest and excitement as someone several decades her junior.

It was an honor to speak with Ms. Collins from her home in New York City at the seemingly unlikely hour of 10 a.m. on a Monday morning. Even though she had performed a concert in Morristown Pennsylvania the night before, she was as attentive and enthusiastic as ever.

It’s amazing that you’ve continued with your career for 60 years, and even more so that you’ve been so particularly prolific as of late?

I can't stop. To stop for me would be to die and I don't want to die. I'm so excited about this new album. I can't believe that finally, after 60 years, I'm putting out an album of all my own songs. We’ve finally settled on the title. It's called Spellbound.

That is a first, given the fact that you’re known as such an astute interpreter of other people’s material.

I wrote my first songs after Leonard Cohen asked me why I wasn't writing my own. It was an interesting question.

Instead of saying, you should write your own songs, he just said, “Why don't you?” There's a big difference.

I've always had a handful of my own songs on various albums, ever since I first started recording in 1967. I did cover some of my own songs most recently on an album called Winter Stories.

It went to number one for the first time in Billboard, which they seemed to be excited about. They called me and said, “Oh, Judy, you have a number one!”

That seems to be sort of a backhanded compliment from them, but nevertheless, you’ve had a lot to show for yourself recently.

Most recently I made an album called White Bird, which was a collection of repeats, plus a new song ‘White Bird,’ originally recorded by a group called It’s a Beautiful Day. Then there was the album at Town Hall, which we released in January, when we performed a live virtual concert with no audience during the pandemic.

You seem to be really quite driven, even now?

When I stand up there and do what I do, I realize that’s who I am. Many of us get confused about who we are. Are we writers? Are we singers? Are we CEOs of our own companies? Are we speakers at various functions? Are we the hostesses with the mostest? I'm a performer and that's where I live.

You've been very involved in several causes and initiatives as well. You've kept your voice as an entertainer, but you’re also someone who speaks up for the things she supports.

I'm very grateful for that. Sometimes that's all I have left — a soapbox, a guitar and the ability to sing.

Of course, you got your start during the birth of the modern folk movement in Greenwich Village in the early 60s. That era resonated not only with wonderful songs, but with messages that had to be heard.

So how have you seen the folk movement evolve? Do you find that there’s still a connection to social consciousness with the music being made today?

I think so. The fundamental basis of all of this is the fact that Woody Guthrie and Pete Seeger started their lives as singers writing songs to raise money for the unions.

Most people are not really aware of that. They were raising money to keep the unions in business, and to make a bit of a living. Of course, they were blacklisted because of McCarthy. So many artists were punished for their ideologies.

People are being ostracized even now.

Christ, Biden is doing the big work that has been abandoned, disavowed and shoved under the rug. So now our bridges are falling apart and we have no infrastructure, and we're killing the planet.

I mean, what are we supposed to do with the last years of our lives except to fight for nurses, doctors, healthcare workers and the rights of people of color? I can't always show up in person for things, so I give money to the things I believe in.

“I believe in helping other artists and I am very honored that I was able to help some become famous. Everybody needs a hand-up”

Of course, you helped in other ways as well. You helped nurture the careers of Joni Mitchell, Leonard Cohen and Randy Newman, among many others. It’s amazing how you knew that their songs needed to be shared. That's a gift and a talent in itself?

In the morning, when I do my meditations, I often go through all the people who gave me a hand-up from the very start — like the guy who hired me at Michael's pub in 1959.

He didn't do it because he loved folk music. In fact, he hated folk music. He was doing just fine with barbershop quartets and accordion players, and then I came in and did an audition. The college kids went crazy. He said, “I'm gonna have to hire you”. I asked, “Is that a bad thing?” And he replied, “Well, I hate folk music”.

You’ve continued to help other artists in recent times, thanks to the albums you’ve recorded with lesser-known performers such as Ari Hest, Chatham County Line and Jonas Fjeld. You’re still giving them a hand-up. It's admirable.

Yes, the last few years have been very prolific. I had a lot of things in the pipeline, including the recording with the orchestra which I did for PBS. We did a duets album, which I'd never done before.

Then Jonas and the Chatham County line came along. They not only got me to number one on Billboard, but also to number one in Norway. We were nominated for their equivalent of the Grammys over there.

That relationship has been very, very important to me. I went there for two weeks, but I was in quarantine for a week and then did a bunch of shows with Jonas. We walked around a little puffed up over there. I’ll also be performing with Chatham County Line in Town Hall on the 15th of December, and we'll do a lot of the songs from Winter Stories as well.

It seems that you are always looking to expand your parameters. A lot of artists rest on their laurels, but you’re constantly looking for new avenues to explore. It's really a credit to your efforts as an artist and innovator.

I can only chalk my career up to fate and good fortune. I had a great singing teacher who I studied with for 32 years. Everybody needs those moments, people giving you affirmation, support and telling you you're doing a great job. That's all part of it.

Everybody thinks life is a simple one direction situation, but it's not by any stretch. It's really not.

Judy Collins' live album, Live At The Town Hall, NYC, 2020, is out now via Wildflower Recordings. You can purchase the album from one of our selected partners below. 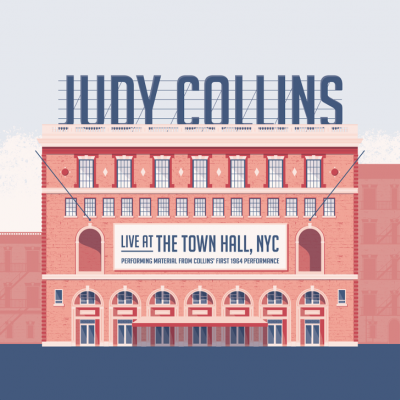