Another name Morris mentioned belonged to newcomer Brittney Spencer, a Baltimore native who has worked as a background vocalist for artists including Carrie Underwood, and moved to Nashville in 2013 to pursue her own career in country music.

Spencer’s elegant, powerful voice first caught the attention of Morris and her Highwomen bandmate Amanda Shires in October of last year, after Spencer posted a cover of The Highwomen’s ‘Crowded Table’. Shires retweeted Spencer’s video, writing, “This is beautiful, Highwoman. Some day, we will play again—and when we do, we’d be honored if you’d come sing this with us.” Morris added her own sentiments, saying, “Brilliant. Come sing with us.”

Possessing more than just a compelling voice, Spencer is a storyteller in her own right, following in the tradition of artists like Morris, Shires, Loretta Lynn, Miranda Lambert, Eric Church, and others with singular perspectives and styles of song craft. In December, she released her EP Compassion, pleading for a society with more empathy on its searing title track, taking on the role of the heartbreaker in ‘Sorrys Don’t Work No More’, and championing individuality and self-assurance on ‘Damn Right, You’re Wrong’.

Here, Spencer discusses the formation of her new EP, her journey to Nashville, and the uphill battle that female artists face at country radio.

You received support from members of The Highwomen last year, but they didn’t just give lip service—you recently had a co-writing session with Amanda and Maren, along with Jason Isbell. How did that come about?

Amanda invited me to sing with them when someone posted this YouTube video that I had put out like six or seven months ago. So Amanda hit me up with a message and said, “Hey, we should write.” She just talked to me like I was a person. Out of all of the wonderful things that have happened since the tweet that she and Maren posted, and even the writing session that we did, the biggest gift in all of this is that they just saw me as a person who is creative. They treated me like I was just someone they knew, and we formed a budding friendship. They are normal, down-to-earth people and are extremely talented. They have been so kind to me.

You recently released your EP Compassion. Were you surprised at all by the reaction to the project?

If I’m honest, I didn’t think people would really listen to this EP. I didn’t expect the support and love that I’ve gotten, because it wasn’t just a bunch of songs about trucks. Don’t get me wrong, I have songs - I mean, I don’t have any songs about trucks - but I do have party songs. I have songs that talk about other things that aren’t such heavy topics, but I wanted this EP to do a couple of things. I wanted it to show that I am a songwriter who knows how to vocally communicate the ideas in the lyrics. I wanted to show that I am an artist, a songwriter, and I’m about my shit. There are things I care about.

On ‘Thoughts and Prayers’, which you sang and co-wrote with Brock Human, you address the topic of mass shootings.

I wrote that last year with Brock and Olivia Yokubonis at a songwriting camp, hosted by a creative community called Common Hymnal. This song comes from a place where we want to see common sense reforms happen with gun laws. I think a lot of times we see tweets, statistics, and numbers, but we don’t see people. There’s a person who lost a husband, a wife, a child, a best friend. We played the song for about 25 people at the writing camp. Brock had invited a friend, who had lost one of his closest friends during the Las Vegas shooting [in 2017]. When I heard Brock’s friend’s story later that night, that’s when I realized how special this song could be. I have learned when you have your own body of work, to see it as something that serves people.

You wrote ‘Compassion’ by yourself. You don’t see solo writes very often in country music these days.

You don’t see it, and I think I came to terms maybe two or three years ago that I would really never fit in to this system in Nashville. I love that there are artists that break that system. I think Miranda Lambert is one of them. One of my favorite songs from her is ‘Dear Diamond’ and she wrote that by herself. I think it’s important to remember how I found music and songwriting, writing by myself, so I schedule time to write by myself. It’s important to hold on to that while still embracing all the beauty that comes out of collaborative efforts.

What are your early memories of being involved in music?

I grew up in church and there is just talent everywhere. The best singer in the church is the receptionist, or the best musician in town is a teacher. While growing up and listening to gospel music and singing in church, I was also being classically trained all through middle and high school. I did classical music competitions, opera, jazz standards, just being exposed to as much music as I could. When I was 14 or 15, I was introduced to the music of the Chicks — then they were called the Dixie Chicks — and it opened my world to another style of songwriting. And their harmonies felt like church to me; it sounded like a quartet.

In middle school, I got accepted into an arts school. It was beautiful, just being around creative people all day. I went to school for music and studied voice, but I was also around people who studied dance, culinary arts, business, visual arts. In a way it prepared me for Nashville. Being in an industry town is challenging, but just being around other creatives is rewarding. 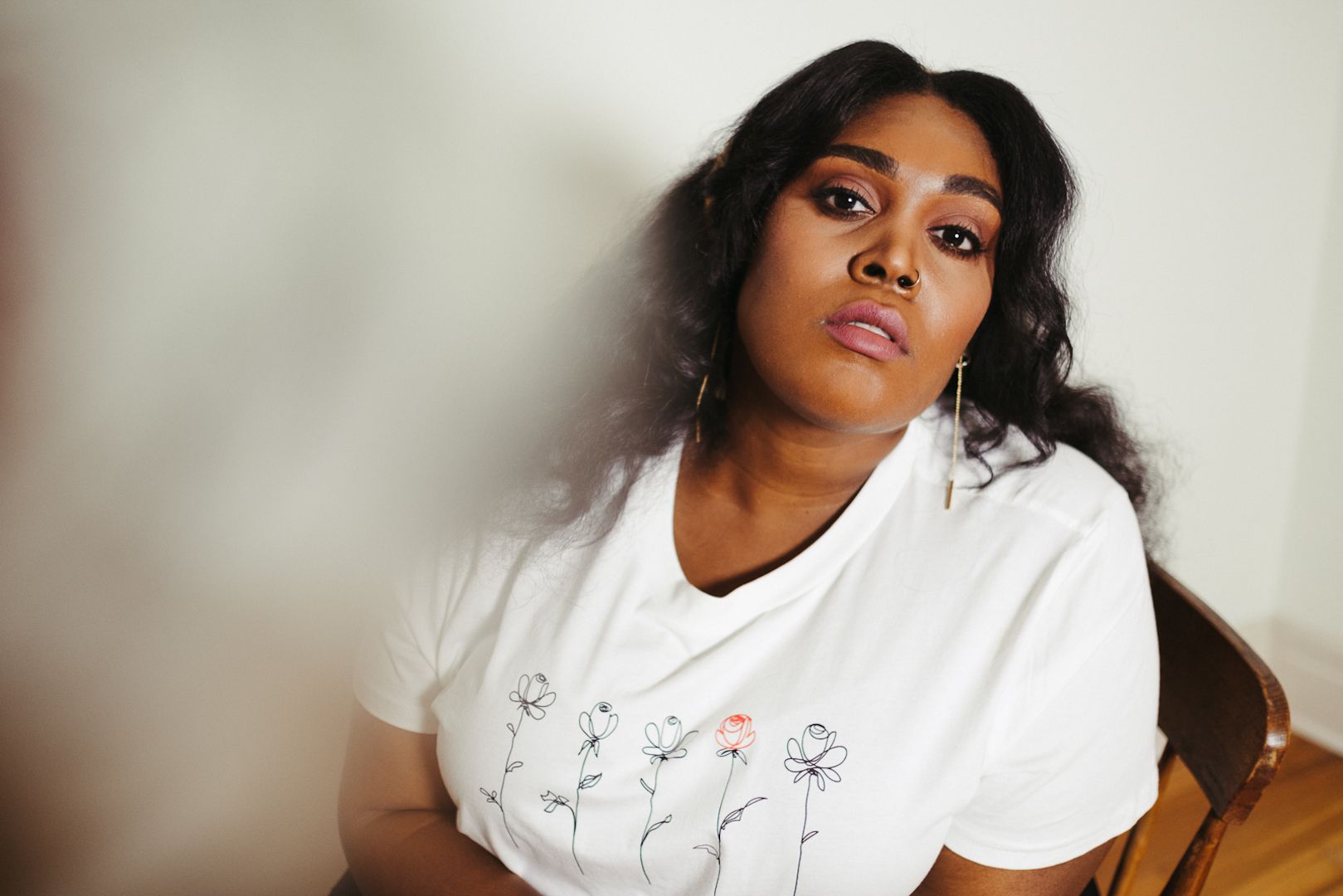 You moved to Nashville in 2013. What do you recall about first moving to Music City?

My first year in town, I didn’t sing anywhere; I just went around town and listened. I taught myself how to play guitar and started busking downtown. I approached it like marketing research. I wanted to figure out what made people stop and listen. What people give me $2 instead of $1? Or $10 instead of $2? I didn’t have the money to attend songwriting workshops or publishing events, so I would volunteer at them. I just wanted to learn. I noticed students are afforded a lot of opportunities, so that sparked my interest in going back to school. The session work I did in Baltimore really opened my eyes to just how ignorant I was about the industry; I had no idea about royalties or payouts; I didn’t know the business side of it and that bothered me. So that fueled my decision to study Public Relations with a concentration in Music Business at Middle Tennessee State University.

You’ve built relationships with established artists like Maren and Amanda, but also with other newcomers. I saw a video of you, Reyna Roberts and Kären McCormick harmonizing on a cover of Little Big Town’s ‘Better Man.’ What has it meant for to you to have that kind of camaraderie?

Kären and Reyna are some of the most special people I’ve ever met in my life. We realized we were being mentioned in the same articles and we all just reached out to each other. It’s really beautiful to have them in my corner and for me to be in their corner as well. We face a unique set of challenges as Black women who are artists. It’s nice to be able to do life where you can talk about those challenges and you can also not talk about those challenges. You can just be with people who get you. We are very aware of what this moment means for Black women and Black artists in country music, but we are also doing a good job of not taking ourselves so seriously. When we posted the video, we weren’t thinking, “Oh this is going to make a statement. This is three Black women in country music.” We just thought, “This is fun. Let’s do this.” I would love to keep that mentality.

You are making music at a time when country radio—which is well known for its reluctance to play female artists—is no longer the only avenue for getting music to fans.

I can’t wrap my mind around how country radio intentionally doesn’t play music from a certain gender. It doesn’t make sense. But I do know that it is changing artists. Artists are becoming more vocal and being themselves, particularly women. It feels like an opportunity, in a weird way. I’m not saying it’s a good thing that country radio doesn’t play women, but women in country music are finding other ways to get our music out.

I love country radio; my introduction to country music was the radio. I hope it becomes more inviting to female artists, but it can’t be our only way. We need people who are challenging country radio to play more women. We also need people to say, “Let’s find places where we are accepted and places where we can belong.” I see how other genres are not solely dependent on terrestrial radio. So I’m watching both of those things work together. I don’t know if things will change, but I do know that people are changing.

Brittney Spencer's EP Compassion is out now via Common Exchange. Listen to 'Sorrys Don't Work No More' below.