By now, the story of how fingerstyle guitarist Yasmin Williams came to learn guitar has transformed into a kind of lore. After beating the expert level of Guitar Hero 2, she taught herself to play the real thing by ear.

But, not satisfied with traditional fingerstyle methods, Williams developed a distinctive way of playing that includes lap tapping — or using the neck as though it were a keyboard — drumming the guitar’s wooden frame and tap dancing for an additional rhythmic layer, and even bowing.

Williams released her debut album Unwind in 2018, but it’s her second and latest album, 2021’s Urban Driftwood, that has captured the attention of so many. Written in the pandemic and at the height of the Black Lives Matter protests in 2020, it showcases her growing compositional dare. Williams earned her undergraduate degree in music theory and composition from NYU before releasing her debut album. On her sophomore effort, her compositional skills move beyond technical proficiency and into creative fluidity.

Urban Driftwood breathes, segueing from the cascading hope of ‘Juvenescence’ to ‘Adrift’, a song Williams wrote about the political climate in 2020 and performed with her high school orchestra teacher, cellist Taryn Wood. It is, as Williams explains, more personal than anything she’s created yet.

Speaking with Holler about the artists whose music has informed her, Williams finds a common theme. In creating her own path in the fingerstyle guitar tradition, which has largely remained the bastion of white men, she looks to forebears who each did something original, something only they could do. While Williams doesn’t want to copy anyone else, their individuality and bravery are instructive maps to inform how she journeys forth.

Dexterity seems like such an important part of your playing. How do you strengthen your fingers?

I don’t do enough. I have a warm-up I do before every show that gets the blood flowing. I also do stretches and I have this hand strengthener for grip. Aside from that, I just play.

Given the complexity of your compositions, what’s your practice routine like?

I don’t practice much. When I’m coming up with new songs, I can’t play them fully yet because I don’t have the dexterity to play what’s in my head, so I guess I have to practice my way to get there. I don’t really practice scales or fundamentals.

You learned the kora specifically for Urban Driftwood, which seems really extreme.

It’s really extreme! It’s a West African instrument that has 21 strings — 10 on one side, 11 on the other. It’s kind of a harp-lute. I’m teaching myself how to play it because I’ve loved the instrument since high school, when I heard it for the first time. It has its own unique repertoire.

Exactly. And, to me, it sounds perfect. I wanted to learn it because I wanted to use it on my album. I used it as a songwriting tool. It’s really easy to get in a trancelike state with it. You can kind of play the same thing over and over again and develop a groove that turns into a song. That’s how I wrote ‘Urban Driftwood’.

The average musician might hire someone to come in and play on the track — they wouldn’t go about learning the instrument themselves. What goes through your head to say, ‘I’m going to tackle this today’?

I was fortunate enough to get one for cheap from a friend of mine, who was selling his for $500. I’ve wanted one for so long, it would be stupid of me to pass that up.

It also speaks to your character, that you’d want to tackle that.

Yeah, I’m trying to learn banjo now. I tried to learn in 2019 and I gave up. I wasn’t even that bad, but I only gave myself two months. Being good at something kind of ruins starting over on another instrument. You feel like you should be ahead; your expectations are not realistic.

It reminds me of language. If you learn Spanish, it supposedly makes it easier to understand, say, Italian. But banjo and guitar are so different, even if they don’t seem like it on the surface.

That’s exactly what it is! You think if you know one, you should kind of know them all, but that’s not how it works. Learning chords reminds me that it’s good to start over and learn something new. It expanded my mind in terms of composition, like, I can go back to basics on guitar and see how guitar fits with other things instead of trying to focus on technique or trying to focus on complexity all the time.

You’ve mentioned in other interviews that heritage is important to you. How are you learning more about players like Elizabeth Cotten and the tradition of Black fingerstyle guitar players?

It feels very odd. When I released this record, I wasn’t expecting any of this. I recorded it during a pandemic; I was just happy that the vinyl shipped on time. But I’m happy to be in this space because I feel like there should be more people like me in this space. I feel like it’s about time. I don’t mind being compared... well, sometimes I do, but I’m getting over it because people are talking about the music and appreciate what I’m doing.

How much do you want to bring these traditions to younger listeners?

That’s kind of my goal now. I used to shy away from that a lot, when I released my first album in 2019, I didn’t want to be known as a Black guitarist. I thought it was irrelevant and I wanted to be known for my skills.

Well, people take the narrative and run with it in ways you have no control over.

They do. That’s happened this year — a lot. But now it’s like, I’m lucky enough to be in a space to release an album and have it do well, why not accept this role?

For Urban Driftwood, I was thinking about the social justice movements that happened in 2020, and [living] so close to D.C., I thought it was time for me to put my heritage in my music.

West African music is a precursor to the old music that we know and love. Even the music that I listened to growing up, like Go-go, hip-hop and R&B, is all an extension of that, so why not put them with guitar and expand the guitar canon? If I can do that then that’s cool — that’s what I should be doing.

But it could also be heavy, especially if you hadn’t expected that of yourself.

I grew a lot in 2020 as a person. I’m not afraid to take on what I need to take on to be successful and stay myself. I feel like I’m putting more of myself out in my music. It’s nice for me to feel more comfortable now, because I wasn’t so comfortable doing that before. 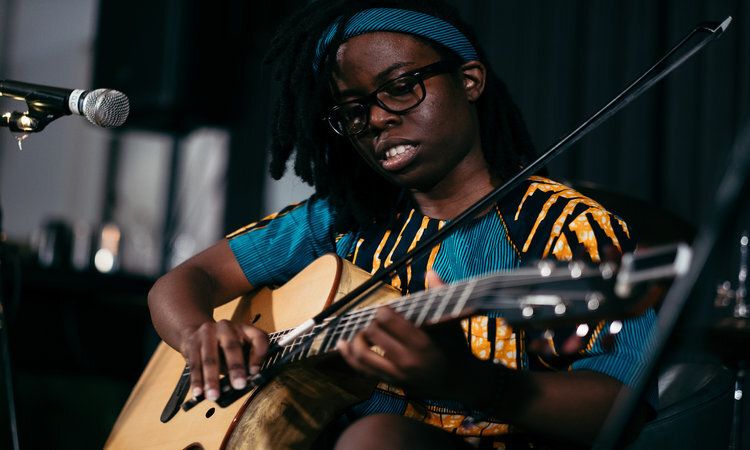 Check out Yasmin's Cuts The Deepest choices below

She’s probably the closest thing I have to a hero because I don’t really believe in having icons. You don’t want to be too much like one person. But her life and how good her music was and how calm she was at her shows, it’s relatable for me and I hope to be like that when I’m older.

She’s just cool. I saw a YouTube video of hers maybe two and a half years ago — she was playing the guitar behind her back and buck dancing. Since I use tap shoes when I play, I thought that was a whole other level. I’m not saying I’ll ever try to do that, but it’s goals for sure. Leveling up. That’s top max level.

To see her doing that as a black woman...when I was a kid, I never imagined black women playing guitar, because we’re never shown that.

It’s funny, I don’t really listen to his music a lot anymore, but whenever I think of him, I think of someone who was completely unconcerned with following any sort of tradition. He did what he wanted to do and looked great doing it. I want to emulate that.

With a lot of these artists, I like them because of how they are and how they were as people and the values they seemed to have. ‘Voodoo Child’ is the only song of his I can play. I’m left-handed, too, but I don’t play left-handed. I tried and it just didn’t work.

I’ve been listening a lot to Marcus Strickland. He’s a jazz sax player and he’s the bomb. His music is very melodic. I feel like a lot of the time when I’m listening to music, I focus on melody, at least with instrumental music. I try to write nice melodies in my own music, and he’s a very melodic jazz sax player. He’s very tasteful.

I’m not a fan of his politics or anything. I mean, 808s & Heartbreak is iconic for a reason, and it spawned off a new direction in hip-hop. I’ve been a fan since I was a child. College Dropout changed my life. Even Yeezus was a good album. He’s a pioneer.

I seem to like people who change direction in their genre and are unafraid. He was wearing polos and sunglasses and nobody was really doing that in hip-hop; they were still on the baggy clothes and too-cool-for-school type vibe.

He did something similar to what Hendrix did for me, which was to show a different direction. Don’t be afraid to be yourself, because at the end of the day if you’re not yourself who else can be you? There’s no point emulating something that’s already been done.