Soulful Southern gent Brent Cobb is chatting from his mother and father-in-law’s house in South Georgia. “They have better wi-fi here”, he says as he smiles widely, surrounded by beautifully ornate saddles and a gleaming Wurlitzer jukebox in the corner. While he’s had some ups and downs since the release of his 2020 record Keep ‘Em On They Toes, he’s back in the game with a very personal new album, And Now, Let’s Turn To Page…

Comprised of eight traditional gospel songs and one original composition all recorded and produced in Nashville’s RCA Studio A by his cousin and producer extraordinaire Dave Cobb, with appearances from his wife and father, And Now, Let’s Turn To Page… is both a gospel album and a family affair.

The decision to make this record had been brewing for a while. Since his two children were born, Cobb says he’s deliberately made albums that can be used as a guide. “If I were to pass away and not be in this world anymore, these songs would be lessons for my kids to let them know who I am and help them through life. This album is no different; I would want them to know that this is what daddy believed in”.

The catalyst came when he and his son emerged safely from a nasty car wreck in July 2020, with Cobb breaking his collarbone. He started thinking about all the things that led to that moment: “I’d always had it in the back of my mind to make a gospel album, and that was the reason I thought I should go ahead and do it. You just never know what might happen”.

Cobb had hunkered down with his wife and kids during the pandemic, finding being back with the family fun. “We fished every day, threw something on the grill outside in the yard in the evening and then I’d tuck them in at night, it’s not been bad”.

He wrote his new song ‘When It’s My Time’ around the same time with his wife. “Sometimes, ideas just fall out of the sky. That night my wife was home and we’d gotten the kids down. We were hanging out with each other on the back porch, having a pint or two, and I had that first “when it’s my time, I’m going to go…” and I knew that with each verse we could just say anything, so we started writing that way”.

He may be 35, but Cobb admits it’s only now that he truly feels like the person he thought he was; “I am the idea of who I thought I was when I was 17, and I’ve finally grown into that idea.”

That self-awareness led him to push himself, both artistically and personally; “I can’t sing like Jerry Lee Lewis and Otis Redding, but to me, they are the greatest singers of all time. There’s something in their delivery that I really relate to. I can’t bend the notes like those guys can, but it’s been nice to try and zero in on that a bit.

"I’m singing the best I ever have on this album", he continues, "the reason is that I’m doing it for something other than myself, for the good Lord. I think that’s how it will feel live as well. It’s not for me, it’s for something else”.

Warming to the task of picking his five favourite gospel songs, Cobb explains how each one has left an indelible mark on him and his music – including a couple of favourites he’s re-recorded for his own release.

I always loved the Hank Williams Sr version of that song – when he is playing live at the Ryman and invites Little Jimmy Dickens up to sing with him. When Napster came out, I was a kid and I didn’t know that I was stealing music! I was looking up Hank Sr, found this one and I made a CD with it on.

At the beginning, Hank says; “and now friends, it’s hymn time here at the Ryman. I’m going to invite my old buddy Little Jimmy Dickens up here and we’re going to do one of the old-time sacred ones, the ‘Old Country Church’”.

We sang this growing up in my church, it’s always been personal to me. When my grandfather died, we were at his funeral in the front pew.

His favourite hymn was the ‘Old Rugged Cross’, and while we were waiting for the guest speaker to come up to sing it, every so often the fan at the front would blow a page of the hymnal book open. By the time he got ready to sit down behind the piano, it was already on the ‘Old Rugged Cross’ and he didn’t have to turn the page!

As well as Jerry Lee Lewis, Alan Jackson made a wonderful version of that song.

I don’t know if this is a traditional gospel song, but Alan Jackson recorded it and it’s great. Brent Baxter and Erin Enderlin wrote it, and I love the comparison of how empty a Monday morning church would be to breaking up with someone.

I imagine church on a Sunday morning, the sunshine is coming in and you’ve got all your friends and family there; if someone leaves you and breaks your heart it’s as empty as a church on Monday morning.

Aretha Franklin – ‘My Cup Runneth Over’

This song is so intertwined with my upbringing and secular music – it’s all one and the same.

My dad used to play this song; I didn’t know another version. I remember when we were getting ready to go to church on Sunday mornings, there’d be a little fire in the fireplace and he’d be playing this song. He took over leading the singing at church when my grandpa decided he didn’t want to do it anymore, so every Sunday morning my dad would be picking out gospel songs to play.

Otis Redding – ‘I’ve Been Loving You Too Long’

Man, there was soul music, but Otis was everything. He recorded a bunch of beautiful gospel songs. I grew up around it so closely that it’s hard to pick one, they’re all part of my upbringing. Otis would lead the singing at church, that’s where he developed his style. ‘I’ve Been Loving You Too Long’ is gospel to me; it could be a love song to a woman or a man, or a love song to the Lord.

Otis was one of my first influences, maybe the biggest influence on my writing and delivery. There are other genres of music, and then there’s Otis Redding. My wife and I started dating when I was 17, and we were riding around listening to Otis on little country roads down here. Who else our age was doing that?

One of the very first songs I learned when I was a kid was ‘Sitting on the Dock of the Bay’, that’s my favourite song ever.

Brent Cobb's new album, And Now, Let’s Turn To Page…, is out Friday January 27th via Ol' Buddy Records / Thirty Tigers. You can pre-order the record from one of Holler's selected partners below: 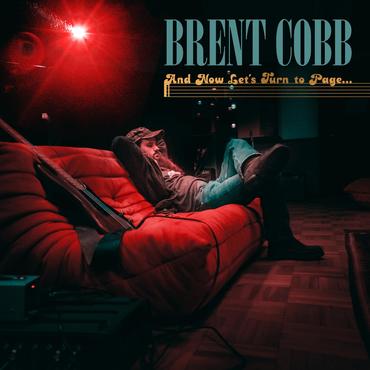 One Hot Minute: The Steel Woods