A Guide To: 10 Things to Know Before You Go to Windy City Smokeout

Finally. Finally. Finally. After endlessly worrying that we may never know the feeling of live music ever again, with the echoes from the amplifiers ringing in our heads, concerts are indeed back. As are the hundreds of thousands of fans who are more than ready, willing and able to see all the shows and festivals they missed in 2020.

It’s pretty safe to assume that anyone who is vaccinated right now feels a little bit like a superhero who can easily fight off Covid-19 and withstand the rigors of a general admission festival. Which is exactly what’s going to unfold now that the only four-day country music festival in Chicago - the Windy City Smokeout – is about to open its gates July 8-11.

That said, this is not our first rodeo. We have been to the Smokeout since it was just an infant in 2013, when it was held under an overpass in Chicago’s River North neighborhood. So we know some things that fans ought to know. By 2019, the Smokeout had outgrown that first makeshift venue and moved to the sprawling parking lot of Chicago’s United Center arena on the near west side of the city.

Now, after a lengthy year of an abundance of caution and the unprecedented times we all endured in 2020, the Smokeout is back and bigger and better than ever. It also has additional square footage to spread out: 18 acres of space so that the stage, the fans and the vendors all have a little more elbow room. Literally 30 percent more room than it had in 2019.

In an effort to make sure that fans have all the intel they need for this year’s Smokeout, because we haven’t done concerts like this in a while, here are some things you should know before you go: 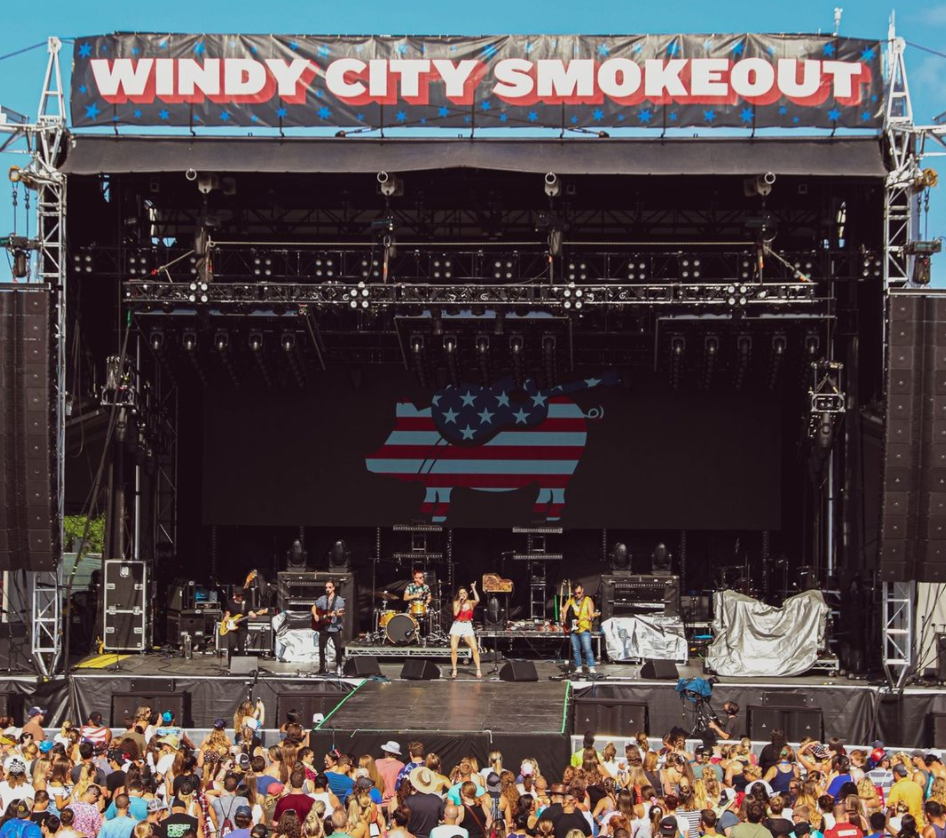 So you need to steel yourself for the crowds. If you get uncomfortable in standing-room-only crowds, then don’t bother trying to make your way up to the front of the stage. Because once the headliner comes on, you will be stuck there. For people with big bladders and a high tolerance for close contact, that’s not even an issue. But for some fans, it’s better to just listen to the music from a distance. The Smokeout has mastered the art of outdoor audio, so you can hear the music just fine from a few hundred feet away.

2. Pace your damn self

Who doesn’t love a good summer darty (day-drinking party)? We’ll tell you who: the ones who day drink and then night drink. Once you’re 21, it may technically be legal. But is it a good idea? Probably not. So do your best to pick one or the other: drink all day or drink all night. There will be 25 different beer vendors there, so it’s not like it’ll be difficult to put a drink in your hand wherever you’re standing. And it wouldn’t kill you to drink as much water as possible. Trust us, the morning(s) after, you’ll be glad you stayed hydrated. The festival has an ample supply of free water ready to go, so you have no excuse not to.

Anyone coming to the Smokeout is required to use the Health Pass service on the CLEAR mobile app to complete the screening before walking through the gate. And you don’t want to be That Person holding up the line because the app won’t download or it lost your information. So if you’re fully vaccinated, and you show proof of that or proof of a recent negative Covid test within the app, you do not need a mask. WE REPEAT. YOU DO NOT NEED A MASK.

4. Bask in as much of the Dierks Bentley, Darius Rucker, Brett Eldredge and Jon Pardi music as humanly possible

Nobody asked for this 16-month hiatus, so if you want to revel in live country music, then by all means, revel. Revel twice as hard. You’ll be surrounded by like-minded people doing the exact same thing. So make a few new friends, sing along, take selfies, shoot some videos and count your country music blessings. There is no shame in the superfan game.

5. Don’t forget the other acts

Headliners are cool, but have you seen Riley Green, Jillian Jaqueline, Larry Fleet, Hailey Whitters, Ryan Hurd, Lainey Wilson, Morgan Evans, Walker County, Randy Rogers Band and the rest? The line-up at this year’s Smokeout is packed with the absolute best, so don’t miss out on the early artists. They may very well be next year’s headliners.

6. How to get from point A to point B

If you’re navigating to the Smokeout via a ride-share app, a cab or walking from a train station, the street address is 1901 W. Madison Street. This year’s fest will have designated ride share drop-off and pick-up spots, too, which will make things run smoothly. The actual gate to enter the fest is at the corner of Madison Street and Paulina Street.

There are no official United Center parking lots open - obviously, what with the festival going on in said parking lots - but if you drive yourself there, there are a few options. The Malcom X College parking garage and a couple other lots along Ogden Avenue would put you within walking distance of the entrance. And the Spot Hero app currently has a few very affordable options. But if you take anything away from this story, it should be this: do not procrastinate and wait until the last minute to book one of those. They will sell out as quickly as the festival is.

7. Fill up on the country’s finest barbeque

The food lines will be long, so don’t put off eating until after you’ve had too much to drink. (See No. 2). BBQ pitmasters from Illinois, New Orleans, Arkansas, Texas, Missouri, South Carolina, North Carolina, Connecticut and Mississippi will all be bringing their A-game, so come hungry. And if smoked meats and barbecue aren’t your thing, try Tallboy Tacos, Happy Camper pizza, Summer House Santa Monica and Sushi-San. Just don’t B.Y.O.F., because outside foods and beverages are not allowed, so those snacks you carefully packed will likely be taken away.

For the first time in the history of live music - we’re pretty sure - there will be more hand-washing and sanitation stations available for all of the fans at the Smokeout. They will in fact be available every 100 feet. There’s no excuse not to clean yourself up throughout the day and night.

9. It’s not always a windy city

Don’t let the name fool you. The winds off Lake Michigan don’t create enough of an actual breeze to cool you off on a hot July day three miles west of the coast. So wear loose-fitting clothes, light colors, a hat to shade your face, and even though we know you want to show them off, consider leaving your cowboy boots at home.

You’re coming for the country music and the world’s best barbeque. We get that. But there is so much else to see and do this time around. There are specially curated happy hours, a Sunday brunch, cocktail classes and even whiskey tastings. So don’t be single-minded about the music. Let yourself explore the space a little, and put some other activities on your to-do list.

P.S. Buy the merch! You probably saved hundreds of dollars on the t-shirts you didn’t buy during the pandemic, right? So now would be a really good time to stock up. The Windy City Smokeout merch is always just as cool as the fest itself, and will give all your selfies a little glow up.